The title of this article may raise an eyebrow as it looks at a viaduct and the tomb of a horse. How do these two go together? I ran accross this documentary recently which explains why. It involves the Loch nan Uamh Viaduct, a railway viaduct located in the western Highlands region, in northern Scotland on the opposite end of the nearest city of Aberdeen, near the Prince’s Cairn. Construction started in 1897 and was completed four years later. Robert McAlpine and Sons were responsible for the design and construction of the bridge, which has eight 50-foot spans, a center pier equally divides the number. The construction did not go without a tragedy, for as you can see in the documentary below, a horse fell through one of the cassions that was being filled with concrete, hence the term bridge with a horse’s tomb. How this happened and what it took to confirm the legend are explained here:

The bridge continues to serve rail traffic to this day, but primarily for tourism. The region where the bridge is located has a lot of possibilities for hiking. Whenever you get the chance to visit the region, check this bridge out. The bridge has a unique history and with that, the story of how the horse was buried in the bridge, a tragedy that truely is considered a once-in-a-lifetime event.

Public Opinion Survey on the Future of Cascade Bridge in Burlington, Iowa

Information on the bridge: http://bridgehunter.com/ia/des-moines/cascade/

Information on the bridge: http://bridgehunter.com/nd/burleigh/bh44455/ 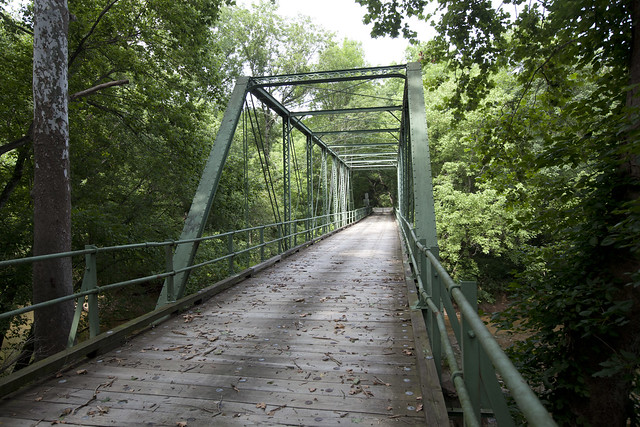 Photo by Virginia Department of Transportation

Rehabilitation to begin on Waterloo Bridge in Virginia:

Information on the bridge: http://bridgehunter.com/va/culpeper/5622/

Information on the project: https://www.fauquiernow.com/fauquier_news/entry/fauquier-3.65-million-waterloo-bridge-restoration-project-begins-2020

Elsen Bridge in Berlin to be Replaced.

Information on the bridge:  https://de.wikipedia.org/wiki/Elsenbr%C3%BCcke

Information on the Highway B 96 (Documentary): https://www.zdf.de/dokumentation/zdfinfo-doku/traumstrasse-der-ddr-b96-von-zittau-nach-sassnitz-102.html

Rodenkirchen Suspension Bridge in Cologne to be Replaced:

Information on the bridge: https://en.wikipedia.org/wiki/Cologne_Rodenkirchen_Bridge

Information on the Replacement Plans: https://www.ksta.de/koeln/fussgaenger-koennten-alte-bruecke-nutzen-36335350

Information on the Project: https://www.dailyrecord.co.uk/news/local-news/see-inside-historic-160-year-21573751

Information on the Aqueduct:  https://www.lochkatrine.com/loch-katrine-aqueduct/

The Bridges of Saxony:  https://www.facebook.com/brueckensachsens/

The Historic Bridges of Iowa: https://www.facebook.com/historic.bridges.iowa/

Plus a memo on the Coronavirus, which has become a pandemic, and ways to handle it.

EDINBURGH/ BONN: One cannot miss this beauty in red when travelling along the Firth of Forth in Scotland. Built in 1890, the three-span steel cantilever bridge still carries rail traffic after 125 years. The work of Sir William Arrol and Company, the bridge was the first of its kind built of steel, and massive enough to withstand the highest winds, even today. The bridge is still considered a work of human ingenuity that has yet to be surpassed, with over 4,500 people responsible for contributing to this ambitious project, according to UNESCO. While the 1.5 mile long structure had received many accolades, including the Chronicles’ Ammann Awards for Best Photo International this past year, the induction into the World Heritage List, provided by UNESCO, serves as the cherry on top of a large red cake that toom 82 years of planning and construction before opening to traffic in 1890 and is still standing ever since. Officials at UNESCO in Bonn today declared this bridge a World Heritage Site, thus making it the ninth bridge (and the third in the United Kingdom) to receive such a prestigious award. The bridge now joins the likes of the Statue of Liberty in New York, The Pyramids of Egypt, The Great Wall of China and even the newly listed Speicherstadt district of Hamburg (Germany) as the places of international importance, which will most likely increase revenue from tourism and the like.

More information on the Forth’s induction can be found here. The Chronicles would like to say congratulations on receiving such an honor.

And for those wondering what other bridges are on the World Heritage List, here is a list where you can click onto the link to obtain information on them:

Stari Most Bridge and the Old Town of Most (Bosnia-Herzegovina)

Before announcing the winners, the author would like to apologize for the delay of the announcement of the winners. The reasons were twofold: 1. While returning home to Germany after spending Christmas with family in the US, he and his family were sick thanks to the flu bug that swept through many parts of the country. Many voters also requested a grace period for that reason plus more time needed to decide on their candidates.  2. In many categories, we had at least three ties for first place resulting in the need to extend the deadline. For that, the extension served as a blessing for many.

Now for the moment of truth. For the first time, the Chronicles, in connection with Forum Communications in Fargo, used the Poll Daddy voting scheme, which turned out to be the most effective way to vote. Thanks to Kari Lucin for her help, it will be used again for the 2015 Awards, which will take place in December. More information under the Ammann Awards page.

The votes were tallied with the top three being announced here. However, a link with the complete list of candidates for the 2014 Awards can be found here.

Without further ado, the winners:

Located over the Raccoon River in Des Moines, the Green Bridge has been in the news for over a year because of a public-private project to remodel the structure. It has been mentioned for many awards and grants. This photo by Mitch Nicholson, who is the author of Abandoned Iowa (website can be found here), will add to the accolades the bridge has already received, with the hope of garnering more support and funding for restoring the bridge by 2017. The Green Bridge won the award by collecting 31 votes (or 41%), beating out the Split Rock Bridge in Pipestone County (15 votes or 20%) and a drone photo of the BB Comer Bridge in Alabama (7 votes or 9%)

Mark Watson, an engineer based in Scotland, is an expert in bridges in his region and found some unique angles of two of the bridges for this awards- the Firth of Forth Railroad Bridge and the Forth Roadway Bridge. The former is slated to become a UNESCO World Hertiage Site this year, while the latter turned 50 last year. Both bridges won gold and silver respectively, with the latter sharing the silver metal with a photo of another unique bridge in neighboring England, the Clifton Suspension Bridge (taken by Laura Hilton). Here are the final results:

This year’s category features five candidates as well as three post humus, the latter of which will be featured in separate articles coming out in the Chronicles. Two of the candidates come from Generation X (born between 1970- 1985) but have vast experience with developing their database on historic bridges in the United States- namely, James Baughn of Bridgehunter.com and Nathan Holth of HistoricBridges.org. Yet experience always trumps youth, as seen with the winner of this award, Jet Lowe. For over 30 years, Mr. Lowe has been the eye of bridge photography for the National Park Service (and more so with the Historic American Engineering Record), photographing bridges big and small. Because of his expertise, this year’s Lifetime Achievement goes to him. The Chronciles has contacted him for a 1 to 1 interview and will post the results soon, once it is finished.

This category had perhaps the highest number of entries but the lowest number of votes. Nevertheless, the winners were found in both the USA and International subcategories. For the USA, the Fink Truss Bridge in San Antonio, the work of a German local, barely got the prize, beating out the Saylorville Bridges in Iowa and the Silent Shade Bridge in Mississippi by only one vote, as well as an abandoned truss bridge in Minnesota by two. In the International part, Theoderich the Great received his Lifetime Legacy Award post humus, albeit 1500 years late, as his Rome aqueducts shared first place with a bowstring arch bridge in Japan, whereas the Ravenna aqueducts finished second. Despite the plea for more information on the age of the structure, the Drew Bridge, originally from Brazil but now residing in Florida, finished third.