Here’s a question for the readers: Name a bridge you crossed that was the scariest. It can be a through truss or suspension bridge; maybe even a high viaduct or those vine bridges. Where was it located and what was your experience crossing it? Would you recommend anyone trying it if the structure was still there?

This documentary features the 15 scariest bridges in the world according to the narrator. Each bridge has a story on its history and challenges that drivers face when they cross it. In some cases, they even have some effects that make it even spookier.  Have a look at the documentary and feel free to share your stories in the comment section both here as well as on the Chronicles’ facebook page.  Enjoy! 😀

Don’t forget to register your bridge for this year’s Bridgehunter Awards. More information can be found here.

And also the Iron and Steel Preservation Conference in Lansing, Michigan, which takes place October 18-19. Details and contact information are both here. 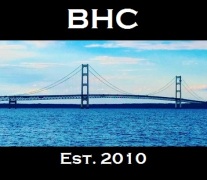 Before announcing the winners, the author would like to apologize for the delay of the announcement of the winners. The reasons were twofold: 1. While returning home to Germany after spending Christmas with family in the US, he and his family were sick thanks to the flu bug that swept through many parts of the country. Many voters also requested a grace period for that reason plus more time needed to decide on their candidates.  2. In many categories, we had at least three ties for first place resulting in the need to extend the deadline. For that, the extension served as a blessing for many.

Now for the moment of truth. For the first time, the Chronicles, in connection with Forum Communications in Fargo, used the Poll Daddy voting scheme, which turned out to be the most effective way to vote. Thanks to Kari Lucin for her help, it will be used again for the 2015 Awards, which will take place in December. More information under the Ammann Awards page.

The votes were tallied with the top three being announced here. However, a link with the complete list of candidates for the 2014 Awards can be found here.

Without further ado, the winners:

Located over the Raccoon River in Des Moines, the Green Bridge has been in the news for over a year because of a public-private project to remodel the structure. It has been mentioned for many awards and grants. This photo by Mitch Nicholson, who is the author of Abandoned Iowa (website can be found here), will add to the accolades the bridge has already received, with the hope of garnering more support and funding for restoring the bridge by 2017. The Green Bridge won the award by collecting 31 votes (or 41%), beating out the Split Rock Bridge in Pipestone County (15 votes or 20%) and a drone photo of the BB Comer Bridge in Alabama (7 votes or 9%)

Mark Watson, an engineer based in Scotland, is an expert in bridges in his region and found some unique angles of two of the bridges for this awards- the Firth of Forth Railroad Bridge and the Forth Roadway Bridge. The former is slated to become a UNESCO World Hertiage Site this year, while the latter turned 50 last year. Both bridges won gold and silver respectively, with the latter sharing the silver metal with a photo of another unique bridge in neighboring England, the Clifton Suspension Bridge (taken by Laura Hilton). Here are the final results:

This year’s category features five candidates as well as three post humus, the latter of which will be featured in separate articles coming out in the Chronicles. Two of the candidates come from Generation X (born between 1970- 1985) but have vast experience with developing their database on historic bridges in the United States- namely, James Baughn of Bridgehunter.com and Nathan Holth of HistoricBridges.org. Yet experience always trumps youth, as seen with the winner of this award, Jet Lowe. For over 30 years, Mr. Lowe has been the eye of bridge photography for the National Park Service (and more so with the Historic American Engineering Record), photographing bridges big and small. Because of his expertise, this year’s Lifetime Achievement goes to him. The Chronciles has contacted him for a 1 to 1 interview and will post the results soon, once it is finished.

This category had perhaps the highest number of entries but the lowest number of votes. Nevertheless, the winners were found in both the USA and International subcategories. For the USA, the Fink Truss Bridge in San Antonio, the work of a German local, barely got the prize, beating out the Saylorville Bridges in Iowa and the Silent Shade Bridge in Mississippi by only one vote, as well as an abandoned truss bridge in Minnesota by two. In the International part, Theoderich the Great received his Lifetime Legacy Award post humus, albeit 1500 years late, as his Rome aqueducts shared first place with a bowstring arch bridge in Japan, whereas the Ravenna aqueducts finished second. Despite the plea for more information on the age of the structure, the Drew Bridge, originally from Brazil but now residing in Florida, finished third.

The next mystery bridge takes us over 20,000 kilometers away from home, to the country of Japan.  With over 127 million inhabitants and despite the tragedies that have affected them for years- namely the atomic bombs that were dropped on Hiroshima and Nagasaki which effectively ended World War II,  and the triple disaster at Fukushima three years ago (earthquake, followed by a tsunami that wiped many cities off the map and the worst nuclear disaster since 1986)- Japan maintains an unusually fast-paced but honor-obsessed culture, which makes the country stand out among other industrialized countries in the world. The country is famous for its sushi and rice, and thanks to its decades of developing modern technology, Japan is the third most powerful country in the world with regards to the world economy.

Many people do not really think much about Japanese heritage as the population is always on the move. And it is no wonder why  historic bridges are almost next to never mentioned. Yet John Paul Catton, who is the author of the Sword, Mirror, Jewel Fantasy series and webmaster of Planet 303 (Adventures in a Post-Fictional World), happened to find this jewel, while providing readers with a tour of the Japanese city of Asakusa.  The city is part of the perfecture of neighboring Taito, which is part of the Japanese capital of Tokyo.  As for the bridge itself, it has a history of its own. The truss design is clearly marked: A Whipple pony truss with pinned connections. This design was patented by Squire Whipple in 1841, and set the precedent for the development of the bowstring arch bridge in general, which started populating the American landscape in the late 1860s. The Norman’s Kill Bridge near Albany, New York, built in 1869, is one of the earliest examples of this truss type.

The Whipple truss bridge at Asakusa, according to Catton, used to be located in Fukugawa, which is southeast of Yamaguchi on the extreme southwest end of Japan. It was relocated to this place in Asakusa in recent times, perhaps 10-20 years ago,  given the newness of the abutments, and the roadway that runs underneath the span. While no exact dimensions have been found on this bridge, one can assume that the span is between 20 and 30 meters long. Because welded and riveted connections were introduced in 1910 to replace the pinned connections, one can assume that the bridge was originally constructed in the time period between 1865 and 1880, and whoever designed the span was either a disciple of Squire Whipple himself, or he borrowed the design from him (or his colleagues) to use when building it at Fukugawa. Because Fukugawa is 918 kilometers (570 miles) southwest of Asakusa (in Tokyo), the feat of relocating the span to its current place must have been a Herculean one, because of the exorbitant costs combined with obstacles in transporting it (Think of the mountainous landscape, combined with potential earthquakes, which overshadow the well-knitted infrastructure).  Such a feat is rare to find in the United States, yet attempts are underway to relocate a truss bridge from Pennsylvania to Alabama as part of a major project, supported by Alabama DOT and a private group wanting to save the BB Comer Bridge. If approve, this record distance of transporting a historic bridge from A to B, will surely be broken.

This bridge was first mentioned through bridgehunter.com, though a thorough article about the bridge and the request for information about the bridge’s history has not been written until now. Therefore, the Chronicles needs your help regarding finding the following information:

1. When was this bridge built?

2. Who was the bridge builder? Was he a disciple of Whipple or did he work for a firm in Japan (or elsewhere)?

3. Where exactly was this bridge located in Fukugawa?

4. Because of the fact that the bridge is one of the oldest left in Japan, what was the motive behind relocating the span to Asakusa?

5. When did the relocation take place and how?

Send your information to Jason Smith at the Chronicles at: flensburg.bridgehunter.av@googlemail.com. As soon as all the questions have been answered, there will be a follow-up to this article in the Chronicles.

Japan does take pride in its culture, and how (and why) this bridge was relocated remains a mystery, except for the fact that they really care about it, considering it one of the important landmarks of Japanese history. The Chronicles is working together to make sure the bridge’s history and its association with the development of the Japanese infrastructure comes to light. More on this Mystery Bridge will follow.

Fast Fact: Fukugawa is located between Hiroshima and Nagasaki, the two cities that were destroyed by two atomic bombs in 1945. President Truman ordered the bombs to be dropped after Germany surrendered to the Allies in May. Hiroshima was destroyed on 6 August, 1945, Nagasaki followed three days later. Japan surrendered on 2 September, 1945, when Emperor Hirohito signed the surrender papers on the USS Missouri, with General Douglas MacArthur overseeing the process. How nuclear radiation affected Fukugawa as a result of the two bombs, remains an unknown factor.

The author of the Chronciles would like to thank John Paul Catton for the use of the photo.