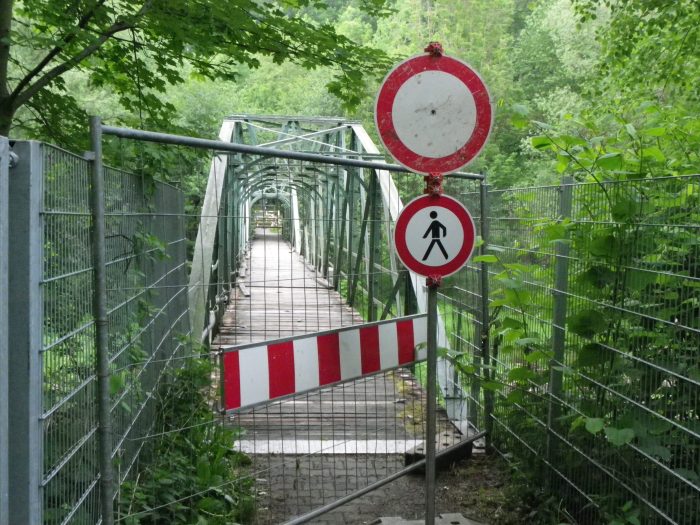 Two-span iron truss span over the Mulde River one of eight crossings facing construction in the next year.

AUE (SAXONY), GERMANY- Construction is heating up this summer as many roads and highways in Germany are being reconstructed, retaining walls in the mountain regions are being rehabilitated and dozens of bridges are being restored to their former glory. The most striking is the fact that not just one, two or three bridges, but as many as nine bridges spanning the River Mulde in western Saxony are being scheduled for work in one way or another. Apart from building a new cable-stayed suspension bridge at Schlunzig (south of Glauchau), three bridges in Glauchau alone are being beautified, including the Hirschgrund at the castle complex, 400 meters from the river. The oldest covered Bridge in Zwickau (the Röhrensteg) is being restored and is taking longer than expected.  The Cainsdorf Bridge south of Zwickau is being planned for replacement.  Everyone knows about the Bockau Arch Bridge replacement project near Aue and its pending future after the new bridge opens next year. Then we have a crossing at the Eibenstock Reservoir, built in 1980, plus the 151-year old stone arch bridge in Wilkau-Hasslau that have cracks in the concrete and will need to be closed for repairs, forcing drivers to make detours of over 25 kilometers per bridge. 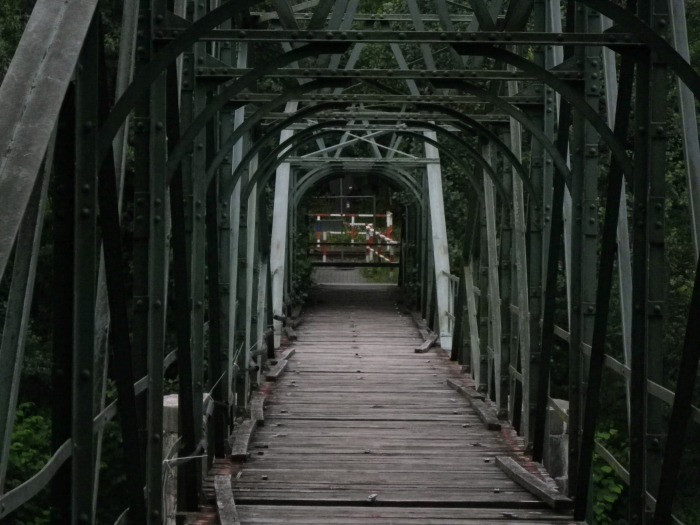 And then we have this bridge- a pedestrian bridge between Schlema and Aue that is now closed to all traffic. Workers recently closed the over 115-year old structure as they plan to rehabilitate the two-span Parker through truss span, whose predecessor was a wooden covered bridge. According to the Free Press in Aue, the decking of the bridge will be rebuilt and then integrated into the Mulde Bike Trail network. The trail itself is in the middle of construction and when completed this fall, it will run parallel to the river from Aue to Schlema, crossing the Iron Bridge. It currently shares a street connecting the two communities, but sharp curves and steep hills make it dangerous for cyclists and drivers alike. The catch to the problem however is with the railroad crossing. Because the current gates, used for pedestrians, are not suitable for cyclists, officials are looking at three options, all of them will cost as much as the project itself, which is 500,000 Euros (ca. $620,000).  The first option is a modern railroad crossing guards like at the train station Bad Schlema. Another is a tunnel under the railroad tracks, which will require multiple closures of the rail line between Aue and Zwickau. And then there is a bridge that would cross over the tracks before gliding down towards the historic structure. Officials believe the third variant would be built and open by 2019. In either case while the bridge renovations may be cheap, the solution for the railroad crossing on the east end may be the one that could break the bank. Still, when the project is finish, cyclists can go from Eibenstock to Schlema without having any interruptions with detours, etc. There is hope that this stretch can be extended to Hartenstein (five river kilometers from Schlema), which would include restoring the Schlema Stone Arch Bridge. But because of lack of funding, chances are likely that after the fusion between Aue and Schlema, financial resources will be available to make both projects happen. The interest is there but in praxis, it is a different ball game.

But for now, the Aue-Schlema has priority while the story continues with the other stretch….

PVD Now and Then