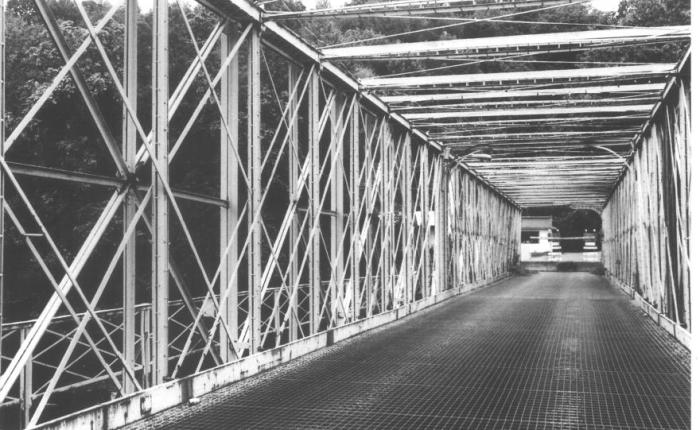 And so it goes: On this date 10 years ago, I published my first article in the newly created Bridgehunter’s Chronicles. When I first started this column I wasn’t sure how to put it together and what topics I should focus on regarding historic bridges and ways to restore them. I even got some advice from friends and fellow bloggers on what to write about. But I decided to start small and focus on a bridge that had a very high value to me as a person as to those who wanted to save it.

I visited the Mead Avenue Bridge in August during the Historic Bridge Weekend in Pittsburgh. Together with two dozen bridge enthusiastst, we spent a good hour at the site, getting some great pictures of the truss span encased into another truss span, that had been closed to traffic since 2007. Most of the pictures plus facts can be found in James Baughn’s bridgehunter.com website.

Since that time, a new bridge has taken over the scenery. Yet the truss spans have been dismantled and are in storage waiting for reuse. According to Art Suckewer, who owns this and two other spans, plans are in the making to restore the bridge and make a park where it would be a centerpiece with information on its history. It is unknown when this project will be realized, but Mr. Suckewer mentioned it would be sooner than expected.
So while we won’t have much more information for a while, enjoy my first piece on this bridge and how it became a starting point for my journey as a pontist/ journalist.

My first entry of the Chronicles takes me to northwestern Pennsylvania and this remote location in the corner of Meadville, located along Mead Avenue over French Creek. If one takes a look at the bridge on the outside, the first impression of the structure is that it is one of a kind that you will never see elsewhere. The bridge is actually two bridges built into one. The inner portion of the bridge was constructed by the Penn Bridge Works Company of New Brighton in 1871 and consists of two spans of a Whipple design (see figure 1) all built using wrought iron. Its end posts are vertical and consist of balustrades on each end and have Phoenix columns, meaning they are shaped in a somewhat octagonal shape. The portal bracings- the entrance into the bridge- are unique as they presented a series…