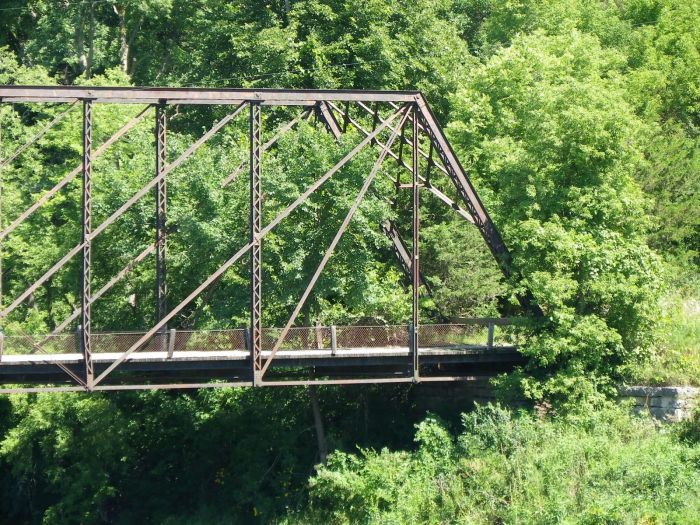 The next Pic of the Week takes us to Fayette County and to this bridge. The West Auburn Bridge was built in 1881 by Horace E. Horton of Rochester, MN, who was the main bridge builder for the bluffs region in southeastern Minnesota and northeastern Iowa. The bridge spans the Little Turkey River near West Union and is one of eight Whipple through truss bridges that exist in Iowa. Unique are the portal bracings and the V-laced endposts which you can only see when pulling off of Nature Road onto a dead end road that branches off but ends at the entrance to the bridge (see webpage here)

The photo was taken from its replacement in August 2011 and provides a cross section of the first two panels, which details the trusses, the connections and the portal bracings. One can see that the truss connections are both pinned (mostly at the top chords) and the riveted (at the bottom chords). The diagonal beams passing through the two panels are characteristic of Whipple trusses built during the last two decades of the 19th Century. The replacement bridge was built in 1996 yet the bridge was left to stand in place because of its historical significance and its listing on the National Register.  It’s one of over a dozen truss bridges in Fayette County that has been decommissioned and left standing next to its replacement, thus making the county a real tourist attraction for those interested in finding historic truss bridges.

To see the rest of the bridges in place and plan for your next bridge safari accordingly, click here. 🙂