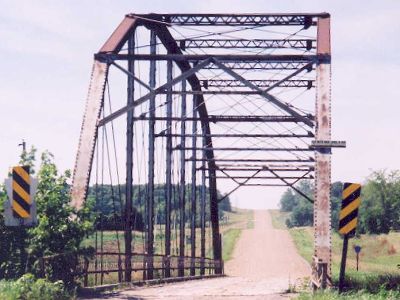 Calls are being given to all drivers to obey weight and height limits on bridges after historic bridge collapses in Nova Scotia, Canada

CANSO (NOVA SCOTIA), CANADA/ REDWOOD FALLS (MINNESOTA), USA-  Government officials on local, state and national levels are urgently calling on truck drivers to beware of weight and height restrictions on bridges before crossing.  This includes crossing bridges with overhead coverings, such as through truss bridges and covered bridges, but also light weight bridges and underpasses.

This is in response to an incident that happened yesterday in the town of Canso, in the Canadian Province of Nova Scotia. There, a semi truck tried to cross the Canso Truss Bridge, a riveted Pratt through truss bridge connecting Durell’s Island with the main land. The truck made it halfway across the structure when the decking gave out and the trusses folded like a deck of cards, sending the truck and the driver 7 meters into the water. The driver was taken to the hospital for injuries. Another person who guided the truck onto the bridge got off before the collapse happened. A video and a link to the article about the incident is below.

The bridge, which was the main link to the island was scheduled to be replaced because of its age and structural obsoleteness. Workers had been doing some prep work for a new bridge built alongside the nearly century old structure.  A temporary crossing is in the works, yet ferry service has been made available for the island’s residents.

The incident came as officials in Redwood and Renville Counties in Minnesota recently installed “headache” bars at another historic bridge. The Gold Mine Bridge is a Parker through truss bridge spanning the Minnesota River at county highway 17 near the village of Delhi. It was one of two known surviving works of German engineer- later politician, Lawrence H. Johnson, who built the structure in 1903.  Truck drivers have reported to have crossed the bridge despite it having a five ton weight limit.  Currently, nearby bridges at county highways 6 and 101 are being rebuilt. A bar with the height of 8.5 feet (2 meters) has been erected at both ends of the bridge and a speed limit of 10 mph has been enforced.Truckers needing to cross the Minnesota River are urged to use the Hwy. 71 and 19 Bridges at Morton.

Bridge collapses as a result of disregarding weight and height restrictions are nothing new, for an average of 25-30 bridges worldwide have either been severely damaged or totally destroyed- a third of which come from the United States and Canada. Truckers have complained of being dependent on the GPS system and finding short cuts, yet part of the problem stems from the lack of education, in particular math and sciences, that has become important for all businesses in general. Truckers need it to understand weight and gravity, but also to calculate the difference between convenience versus safety.  Other factors like working conditions with poor pay must also be taken into account. While many are annoyed that these bridges have restrictions and signs are needed to inform them, as one engineer stated in response to a collapse of another historic bridge in Iowa in 2017: Signs are there to save lives.

Tips on how to avoid areas, including bridges, that are restricted can be found in an interview done in 2015, which you can click here.