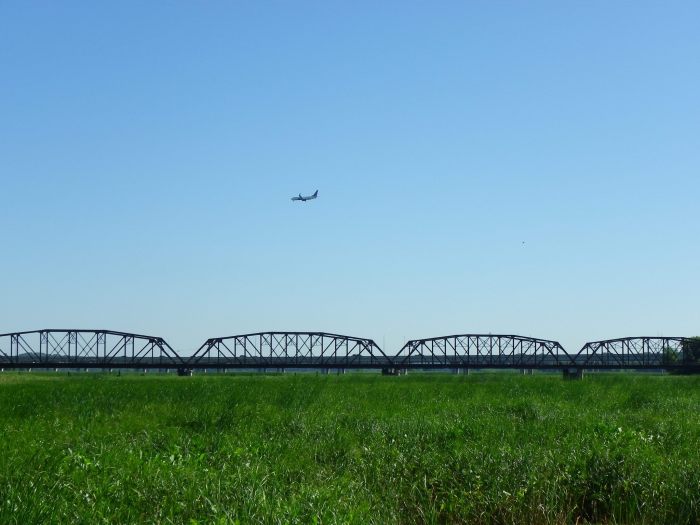 This week’s pic of the week takes us back to 2011 and to Minnesota. This shot was taken of the Long Meadow Bridge from the observation deck of  Mound Springs Park and the Minnesota River Wildlife Refuge on the northern banks of Long Meadow Lake, all located in Bloomington, located south of Minneapolis and St. Paul, known as the Twin Cities.  It was a crystal clear afternoon and I was able to get four of the five Parker through truss spans. Little did I realize is that an airline jet flew low enough over the bridge that it was caught on the camera. It was on its way to land at the Twin Cities Airport. Timing was of the essence, coincidence was gold in this case.  This bridge photo was once the header for the Bridgehunter’s Chronicles on its Areavoices website when it was in operation. The Areavoices site was shut down in April 2018.

Since the photo was taken, the Long Meadow Bridge was rehabilitated and restored to its former glory. It was reopened to traffic in 2016 after two years of restoration and is now integrated into the network of bike trails that runs along the Minnesota and Mississippi Rivers and in the Twin Cities Metropolitan area. Access to the bridge can be found through Cedar Park, on the same side as the wildlife refuge and Mound Springs Park. One has to follow Old Cedar Avenue all the way towards the park. That used to be a key highway before the expressway made it obsolete in 1977.  One can see photos of the bridge before and after the restoration as well as additional information on the bridge’s history can be found here.