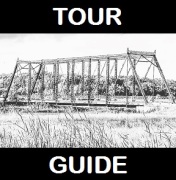 Located on the Whitewater River in southeastern Indiana, Connersville, with a population of 13,200 inhabitants, may be considered a county seat of Fayette County and a typical community located deep in the plains of Indiana. The town was founded by and named after John Conner in 1813 and much of the historic downtown remains in tact to this day.

Yet little do many realize is Connersville was once home to one of the longest covered bridges in the state, a Burr Arch Covered Bridge that had once spanned the Whitewater. It has a restored covered bridge at Roberts Park and an aqueduct that had once provided water to the community.

Lastly, it had been served by a passenger railroad company, the Indianapolis and Cincinnati Traction Company (ICT), whose existence lasted for only three decades due to financial issues, but whose bridges still exist in and around Connersville.

This tour guide shows you which bridges you can see while visiting Connersville. It features a film from HYB on the bridges by ICT which includes the railroad’s history.  It also includes a tour guide of the other bridges, courtesy of bridgehunter.com.

So sit back and enjoy this film clip. 🙂

You can click onto the link which will take you to the bridges of Connersville below:

Information on the Indianapolis and Cincinnati Traction Line bridges are here and the company itself here.

2 thoughts on “The Bridges of Connersville, Indiana”