Back in 2011, I had an opportunity to photograph, document and film the Okoboji Bridge, which used to span the Little Sioux River, a few miles west of West Lake Okoboji. It had spanned the strait that connected West and East Lakes as the second crossing between the first (a cable-stayed span with wooden towers) and the third, a single-span arch bridge. The current span, also an arch bridge, still carries US Hwy. 71 between Okoboji and Arnolds Park.

The bridge was damaged by the flooding during my visit and it would have taken a miracle to pull it out and make the necessary repairs in order for it to return to service someday. Most truss bridges damaged by major storms and floods are usually demolished and replaced because the repair costs are “too high,” according to county engineers. However the bridge was taken off the river and dismantled, stored somewhere until an owner would reclaim it and use it for his/her purpose.

That was according to bridgehunter.com. 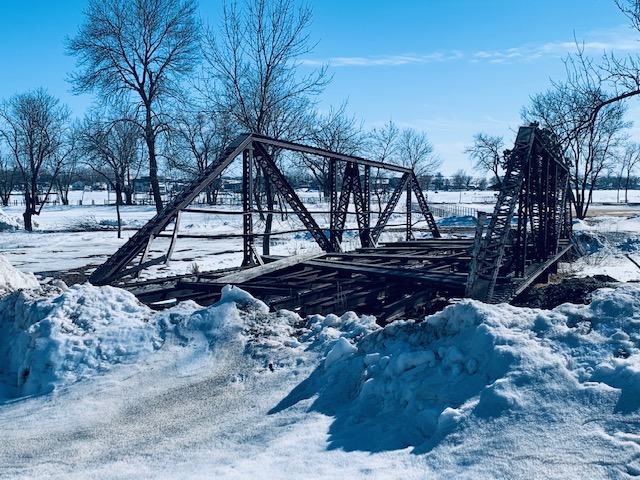 According to Mary Dreier, however, the bridge has a new owner.  Butch Parks, who owns the Parks Marina conglomerate, recently purchased the bridge. According to the website,

Parks Marina on East Lake Okoboji was established in 1983 when Leo “Butch” Parks purchased the then Gibson Sporting Goods. What was once a small fishing boat sales and repair facility, has expanded into a diversified three location business, with marinas, sales, service, storage, boat rentals, pro-shops, and specialty retail stores. Parks Marina on East Lake Okoboji features the World Famous Barefoot Bar. Okoboji Boat Works on West Lake Okoboji features much of the same, along with state of the art boat slips, the world’s largest Fish House, pro-shop and clothing Boutique, and a sandy beach for families to enjoy.

Part of the Parks Marina conglomerate includes a boat sales and service store in Sioux Falls, plus the Central Emporium in Arnolds Park, a shopping mall with over a century’s worth of tradition with small shops that sell food and merchandise typical of the Lakes Region.

Now how does the Okoboji Bridge come into play?

The board of the county historical society recently did a presentation on the bridge and its history, which was well-received by many visitors. It was learned that Mr. Parks bought the bridge a while back with plans to install the crossing over a pond located just outside its East Lake Okoboji location. Already a concrete bridge is in place, according to Google Maps, yet it doesn’t mean that it is impossible to install it either in its place or elsewhere on the grounds. What is known is according to Ms. Dreier, the bridge is currently sitting on the grounds, just outside the large building which stores boats and the like, waiting to be sold and used on the lakes.

What will become of the bridge is unclear. I enquired Parks Marina about the purchase of the bridge and its future use via e-mail, only to get a no response. It could be that the headquarters is still in hibernation and it’s just a matter of a few months until I get a response. It could also be that the owner is not sure what the plans are with the bridge. But in any case, if he does respond, I have some questions for him, which includes:

To be continued. But for now, enjoy the photos Ms. Dreier took for this article.

2 thoughts on “The Okoboji Bridge at Parks Marina”