This image shows the Runcorn Bridge, Widnes better known as the Silver Jubilee Bridge nearing completion in 1961. The bridge over the Manchester Ship Canal was constructed by Dorman Long & Co, Middlesbrough and officially opened on 21st July 1961.

This image was digitised as part of the British Steel Project.

I’ve made many, many trips down US 31 between South Bend (my hometown) and Indianapolis (where I live now). It’s a dreadfully boring 4-lane affair all the way. This hasn’t always been the case, as until about 40 years ago US 31 was a two-lane highway, much of it on a different alignment. 45 miles of […]

via Preserving the old bridge abutment — Down the Road

Following up on yesterday’s bridge entry on the Mystery Bridge along Michigan Road in Fulton County, Indiana, the same writer wrote about preservation attempts to restore the bridge abutment after having been sitting abandoned for years. Take a look at the preservation project at how it was restored to a poing where visitors can now walk right up to the abutment without falling due to erosion and other issues.

Images of an abandoned bridge abutment that once supported a one-lane truss bridge on the Michigan Road in Fulton County, Indiana. 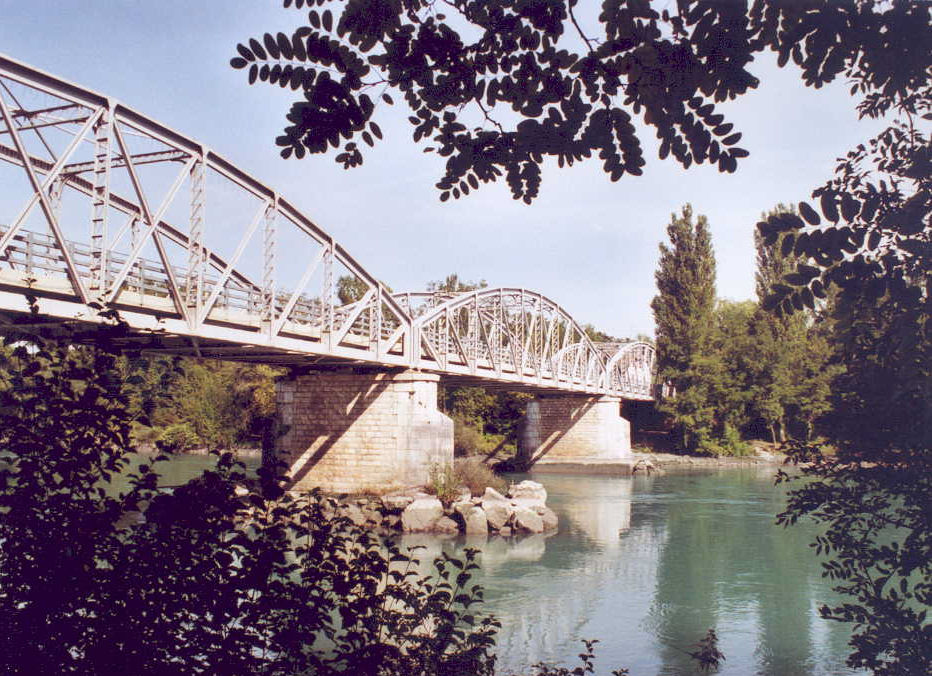 This week’s best pic takes us a long ways back. How far back? To 2006 and my days in Geneva in Switzerland. For three months I did an internship in the field of Health and Nutrition at the World Health Organization. It was an internship that carried with it, lots of memories both at work as well as outside work, visiting the region of Geneva with my wife and friends that I made there- many of them I’m still in contact with to this day. It was also during this time, I embarked on a wide bridgehunting tour which included all of the greater Geneva area, as well as Lucerne and Berne- be it by bike (most of the time), by foot or sometimes by train.

This pic was taken on the banks of the River Rhone in the town of Chancy. Chancy is located at the very tip of Switzerland with much of the mountainous surroundings occupied by neighboring France. This bridge, a three-span bowstring arch through truss bridge with curved Parker truss features, carries the very last road that leaves Geneva (and Switzerland) and enters France. The truss bridge was built in 1907 replacing a wooden crossing. A border control booth was located on the Swiss side, together with the bus stop that ends at the bridge. Since there are no longer border controls at the bridge, a connecting regional bus to Bellegarde in France picks up the passengers before crossing the structure. The photo was taken on the French banks of the Rhone, where water levels were quite low during that summer. The bridge was found behind the trees with the mountains in the background. A picturesque shot which capped my day of biking along the Rhone.

This bridge was featured in a book written in 2005 on Geneva’s bridges, albeit written in French. But sometime down the road there will be one written in German, Italian and English, to better understand how these structures, spanning the Rhone plus three other smaller tributaries, played a key role in the development of one of the most cosmopolitan cities in the world, the place where the international organizations got its start but are now scattered all over the place. The United Nations, which the WHO belongs to, had its headquarters in Geneva before moving to its current location in New York, yet other UN organizations still reside here.

via single frame: Bridge over Cagles Mill Lake — Down the Road

Two bridges on the National Road/US 40 in Blaine, Ohio.

via single frame: Two bridges at Blaine — Down the Road

GLAUCHAU (SAXONY), GERMANY- In connection with the Bridgehunter’s Chronicles’ 10th anniversary, there will be special events going on throughout the year, taking a look back at the 10 years of informing the public about the importance of historic and unique bridges, as well as helping groups get the word out on preservation projects, and providing news coverage and tours of historic bridges. One of these is with the upcoming Bridgehunter’s Awards, originally known as the Ammann Awards, which will be hosted in its 10th year.

The first and most important aspect is that entries will be accepted between now and December 1st for the Bridgehunter’s Awards. Normally entries are accepted between October and December, with voting to commence during the holiday season until January, when the winners are announced. As this year marks the 10th anniversary of both, the Chronicles will accept entries early to allow people a chance to submit their bridge(s), bridge photos and/or people actively engaged in saving and restoring historic bridges. The Awards is open to all, both in North America as well as internationally (Europe, Asia and beyond) and the winners are given in the categories of Best Bridge Photo, Best Example of a Restored Historic Bridge, Best Kept Secret Individual Bridge, Bridge Tour Guide, Mystery Bridge, and Lifetime Achievement. Information on the requirements under each category can be found in the Chronicles’ menu page or you can click here.

Two new categories are being added for this year’s Bridgehunter Awards. The first one is for Best Bridge Genre/Literature. Here, the Award will be given out for any literary work and/or historical book pertaining to bridges. Examples that are acceptable include novels, like The Bridges of Madison County, history and tour guide books, like the book on The Bridges along Route 66. Also acceptable is poetry devoted to bridges. Even one’s own work can be included, although personal reference to the work is required in order to avoid any issues of plagiarism or copyright violations. Some of the works in the running will be profiled prior to the start of voting in December. The first book profiled for this year will come in February of this year.

Another category runs along the same lines as the Tour Guide of Bridges in a City or Region. Also new for the Awards will be the Lost Bridge Tour Guide. In this category, only tour guides of regions where historic bridges had been plentiful before they were replaced but now only a couple to no historic bridges exist. Again, like in the Tour Guide, the candidate will be profiled in the Chronicles before the vote. Photos and small text on each (lost) historic bridge are a must. Existing articles from other sources are acceptable- preferably via wordpress but will accept non-wordpress articles as well.

Please submit all entries for the 2020 Bridgehunter Awards to Jason Smith at the Chronicles, using the contact details below. Get the word out to the (historic) bridges world- the Chronicles turns 10 this year and this year will be a great year. Don’t forget the deadline of December 1st for all entries for the Bridgehunter Awards. Best of luck to all and Happy Bridgehunting until we meet again.

The Rainbow Bridge on Route 66 in KansasCanon PowerShot S952013 Route 66 passes through exactly one county of Kansas on its way from Missouri to Oklahoma. 159 more words

via single frame: The Rainbow Bridge on Route 66 in Kansas — Down the Road

This short film documentary takes us to Avoyelles Parish, and this bridge, located out in the country. The Sarto Swing Bridge was built in 1916 by the Austin Brothers Bridge Company of Dallas, Texas at a cost of over $5200. The structure, spanning the Bayou des Glaises, was the first bridge listed on the National Register of Historic Places, when it was nominated in 1989, the year after it was closed. Dave Baker of KATC-TV provides you with a quick glimpse into the bridge’s history and what you can see at the bridge site. The bridge is open to pedestrians.

Information on the bridge can be found here: http://bridgehunter.com/la/avoyelles/sarto/

First for an admission… Today’s topic slant wasn’t going to be about a bridge’s name but it spawned from of one of the lunch conversation stories with Lynda Blackmon Lowery, MLK’s Celebration keynote speaker, as this and all stories needs to be shared. Shared because it changed my perspective of no matter how much I […]