Historic Bridge in Saxony to be Demolished and Replaced

Freiberg (Saxony), Germany- The days of a historic bridge in the village of Krummenhennersdorf have been numbered. The Bobriitzschbrücke, a two-span stone arch bridge spanning the River Bobritzsch in the village north of Halsbrücke, 25 km north of Freiberg, will be coming down this summer. According to information by the Chemnitz Free Press, the State Ministry of Transportation (LASUV) approved of the project on April 30th, one day before the planned demonstration by the residents damanding a new structure. The new bridge, which will carry state highway 196 like its predecessor, will be 230 meters long, 7.5 meters wide for cars and an additional 1.5 meters for pedestrians. It will be a beam structure with no center pier. The cost of the project has yet to be made, yet LASUV will be overseeing the project in ist entirety. The old bridge, which was built in 1806, will have some elements saved and an info-board on its history will be erected bext to the bridge. This will be the second time a bridge listed in Saxony’s historic monument book (Denkmalschutzbuch) has been torn down in less than a year. In February, the Bockau Arch Bridge (Rechenhausbrücke) near Aue was demolished two months after its replacement bridge opened. The 150-year old bridge had been listed prior to ist demise. The bridge’s remaining relicts have been saved an a memorial will be constructed near the site of the Rechenhaus restaurant later this year.

Hinsdale, New Hampshire- Plans to replace two Pennsylvania through truss crossings spanning the Connecticut River near Brattleboro has been delayed. The DOTs of New Hampshire and Vermont are in the process of starting the replacement bridge project. The bridge will be located 2000 feet from the original sites and have a span of 1800 feet stretching across the river. The two bridges, named after Anna Hunt Marsh and Charles Dana will remain open until the completion of the bridges. The structures built in 1920 will then be left in place and converted into pedestrian and bike crossings. The catch is that construction will start in May 2020 instead of this year. The reason behind the delay are the problems with land purchase for the new bridge on the part of Vermont. Yet the delay is the latest of over a dozen delays dating back to 1994 due to issues involving funding and planning. The cost for the new bridge is being split between the two states while additional funding for refurbishing the Marsh and Dana Bridges are being sought. Barring any delays, the new bridge is scheduled to be open to traffic by 2023.

Gatlinburg, Tennessee- Soon, tourists will get a beautiful view of the Smokey Mountains including the town of Gatlinburg thanks to a pair of sites scheduled to open on May 17th. The SkyBridge, a 680-foot long suspension bridge will feature a glass pane deck in the middle span to provide a spectacular view of the gorge 470 feet below. The bridge is part of Skylift Park, which features a chairlift that takes passengers up five hundred vertical feet from Gatlinburg to the top of Crockett Mountain. That chair lift opened two years earlier and renovations plus maintenance have just been finished recently. After the bridge opens, visitors will be able to step off the lift at the top to walk across the bridge and enjoy the views. The chairlift costs $15 per adult and $12 per child. The bridge is the longest in the US and is the second longest in North America behind a suspension bridge in Canada.

LaPaz, Bolivia- While one bridge is opening for the purpose of tourism, another suspension bridge in Bolivia has opened for the purpose of prosperity. Crews from the group Bridges to Prosperity finished constructing the La Marca Suspension Bridge and opened the bridge to traffic on the 27th of April. The bridge has a span of 300 feet and a length of approximately 700 feet. It connects Sucre and Camilia, located south of the nearest city of Santa Cruz. It will provide easier access between the two communities. More on the bridge you can find on its facebook page under the name La Marca Suspension Bridge.

Second Brazil-Paraguay Crossing to be built

Foz, Brazil; Presidente Franco, Paraguay- After the Bridge of Friendship, construction of another bridge connecting Brazil and Paraguay is expected to start this summer. Presidents Jair Bolsonaro (Brazil) and Mario Abdo Benitez (Paraguay) will launch the foundation stone of the second bridge between the two countries on May 10th. Bridge building will begin by the end of June. The new bridge will be built on the Paraná River, between Foz do Iguaçu (PR) and Presidente Franco, a Paraguayan city next to Ciudad del Este, where the Ponte da Amizade (Friendship Bridge) is located. It’s the busiest border in Brazil, with an intense traffic of vehicles and people, demanding for the construction of a new bridge to deal with heavy traffic, leaving the Friendship Bridge for tourists and locals crossing. The new bridge, which will be a cable-stayed suspension bridge, will cost approximately $75 million and will take 2-3 years to build. Upon completion, only light vehicles and tour buses will be able to use the bridge. It will be the first of many bridges expected to be built over the Parana. According to multiple sources, three more crossings at various cities are expected to be constructed over the next decade, thus improving trade and commerce between the two countries, whose main connection prior to the completion of the first crossing at Ciudad del Este had been with ferries.

Kempten, Germany- One year after taking the bridge apart for the purpose of restoration, the King Ludwig Bridge, spanning the River Iller in one of the largest cities in the Allgäu region in Bavaria, has been placed back on its original piers and is expected to reopen. Built between 1847 and 1852, the bridge is unique for it is the oldest railroad bridge in Europe and the world that was built using wood. It is the only bridge in the world that has double-decking supported by wooden beams. The bridge features Howe trusses that was later supported with Pratt trusses made of iron. Rail service used the bridge from 1852 until 1905 when it was converted to street traffic. The bridge was closed in 2013 and because of its importance as a historic structure and its association with the city, work started in July 2018 to rehabilitate the bridge, where the truss bridge was taken off its piers, the parts replaced or repaired before being reerected back onto the piers. With the project finished, a grand reopening of the bridge is scheduled to take place on May 24th and 25th at the bridge. There, one can tour the newly restored bridge while learning more about the bridge’s history as well as its restoration. A tour of the water works facility near the bridge is also available. Entrance is for free and refreshments will be provided. Information on the grand reopening can be found in the website for the city of Kempten. The crossing will continue its use as a bike and pedestrian crossing.

Small Arch Bridge in Thuringia to Close for Rehabilitation

Sondershausen, Germany- A two-span stone arch bridge serving a small village is scheduled for a facelift. Beginning August 5th, the Wipper Bridge in the village of Göllingen will be closed for traffic as the structure will undergo some structural rehabilitation. This includes repairs to the arches and the decking. The two-century old bridge will be under the knife until the end of this year. Göllingen is 15 km east of Sondershausen in northern Thuringia. From Erfurt, the state’s capital, it’s approximately 35 km.

Railroad Station a Focus of an NDR Satire

Vechta, Germany- Attempts to replace a railroad crossing with a bridge and/or tunnel at the train station became a focus of satire recently. At the train station in Vechta, city officials and the German railways have been trying to eliminate the at-grade crossing with cross arms with first a bridge and later a tunnel. This is part of the project to electrify the rail line between the cities of Osnabrück and Bremen and modernize the train station which features three platforms. In spite of the attempts, passengers wanting to board the train have dealt with mazes and frustration as both variants have excluded tracks 2&3 , the middle platform. End result: the preference to using the at-grade crossing, which has been unwelcomed by the Bahn and the city of Vechta, and millions of Euros wasted for trying to veer people away from there. A satire that can be seen here in the Newsflyer article, courtesy of German public TV NDR. The story is in the running for the Chronicles’ Author’s Choice Awards for the biggest bonehead story. Whether it will win will be determined in January 2020. Vechta is located between Osnabrück and Bremen in central Lower Saxony in Germany. 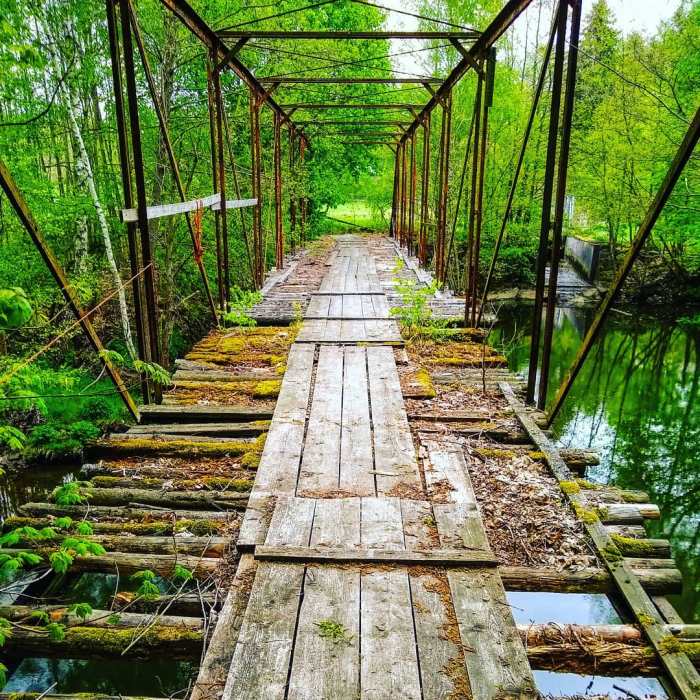 As another series is starting alongside the ones in the running, this pic of the week takes us to the town of Hof. The city has 44,000 inhabitants and is located near the border where Germany was once divided into the eastern and western halves with borders and all. The town was on the western half and was once a key point for people fleeing to the west because of repression in the east. Since 1990, however, the town has slowly declined with many businesses and houses being abandoned and unemployment relatively high. Even some of the bridges in the area have seen better days, like we see with this crossing.

This bridge is located over the River Saale at the dam in Alsenberg in the south end of Hof. It’s a nine-panel Pratt through truss bridge with heel portals and strut bracings, built between 1900 and 1920. The structure appeared to have carried cars and pedestrians because it was built using thin metal and is light weight. The structure has been abandoned for over 40 years and is showing its age as we can see in this picture. The structure is literally getting covered in green moss and vegetation, with wooden planking rotting and the bridge unstable in general. A rather picturesque tunnel view shot but one that is a once in a lifetime shot. A new bridge is being built next to this one, and chances are, because restoration is out of the question due to excessive rust and corrosion, this bridge will be removed in the coming years. For sure the next flood will knock it off its foundations and wash it down stream.

So enjoy this pic while it lasts……