A bridge was officially opened in northeastern Montana to a great deal of fanfare. The new structure, spanning the Missouri River between McCone and Roosevelt counties in the Big Sky Country, was named the Lewis and Clark Bridge. (In May 1805, the Corps of Discovery Expedition led by Meriwether Lewis and William Clark traveled through the region while en route to the west coast.) The bridge is located six miles (9.7 kilometers) southeast of the city of Wolf Point. 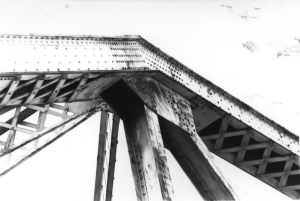 Detail of the structure from a National Park Service report on the bridge, c. 1997.

The bridge (also known as Wolf Point Bridge) is a type of steel truss bridge more specifically classified as a Pennsylvania through-bridge, which features vertical members and diagonals sloping down towards the center and also includes half-length struts. It was built by the Missouri Valley Bridge and Iron Company and was the first…