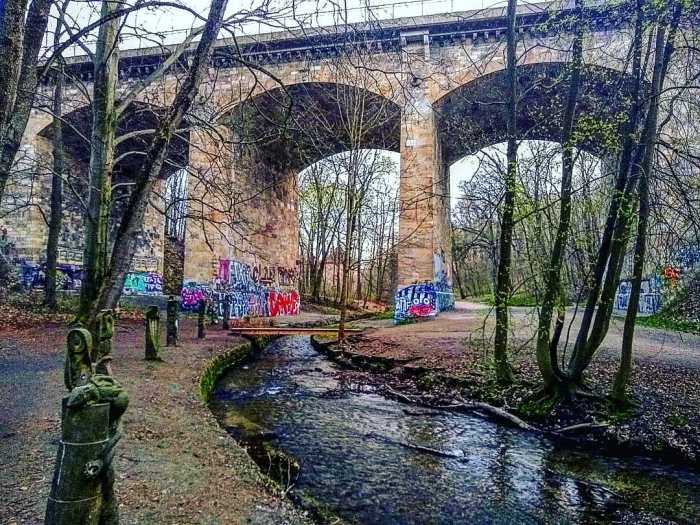 The 43rd pic of the week takes us back to Dresden, but this time in the Dresdner Heide, a region covered with hilly forests where several small streams, including one that has the smallest waterfall in all of Germany, merge to form the River Priessnitz. That river snakes its way approximately 10 kilometers into the River Elbe near the Waldschlößchenbrücke, dodging past many houses and appartment complexes, flanked by trees and beautiful landscapes.

One can be amazed by the number of historic bridges, one will stumble upon while walking along the small river. This includes the largest of them all, the Carolabrücke. Built in 1876, this three-span, closed spandrel arch bridge, built using sandstone, can be found at Stauffenberg-Allee. The bridge is 82 meters long and spans the Priessnitzer Grund that is as deep as 23 meters. The structure was thoroughly rehabilitated in 2003, where new decking covered the arches and is 2.7 meters wider than its original width of 17.3 meters.

In this picture, one can see the 23 meter tall viaduct that has stood the test of time, covered in many shades of colors through graffiti. Yet despite having countless amounts of traffic crossing it daily, the bridge has a sense of serenity surrounded by the sound of water, as the Priessnitz makes its way to the Elbe. Along the stretch of what is called Priessnitzer Grund, there are a series of concrete statues of approximately 1.5 meters tall, all lined up along the river opposite the trail. Each design depicts a historical or fairy tale form, although it is unknown who made the sculptures, except to say that they appear to be at least a century old. Anyone that knows any information on them are free to comment at the end of the article. This photo was taken at spring time right before the trees started budding, which could not have come at a better time. As the bridge is surrounded by trees and other vegetation, making the photo opportunity practically impossible, the best time to photograph this bridge would have to be when all the leaves are off the trees- hence winter time upto the time the trees start blossoming.

One hint to the photographer when getting to this bridge: The Carolabrücke at Priessnitzer Grund is located in Dresden-Neustadt, between the districts of Albertstadt and Äussere Neustadt. In the Dresden-Neustadt, parking is the most notorious for the streets are very narrow- too narrow for even trucks to pass through and very slim for even the average car in Germany. Parking is most difficult to find for all residents have to park them on the street. When driving through there, please do so at a snail’s pace for safety reasons and to avoid damage to your car as well as to the others’. If you do find one nearby, park it and hoof it to the bridge, for the only way to the bridge is via hiking path along the Priessnitz. It may be a walk and a half but it’s worth the exercise. 🙂