After record-setting snowfall and cold in the Midwest of the US, residents and farmers are bracing for what could be flooding of biblical proportions. Already in Nebraska, Iowa, South Dakota and Wisconsin, one can see fields converted into lakes and piles of broken ice from rivers and lakes littering streets and Highways. Billions of Dollars in property lost are expected as floodwaters and ice have destroyed farms and killed livestock, while many houses are underwater with thousands of residents displaced. Highways and especially bridges have been washed away, while other forms of infrastructure have caved in under the pressure of high water caused by snowfall, ice on the ground and massive amounts of precipitation.  For residents in Minnesota, North Dakota, Illinois and regions along the Mississippi and Missouri Rivers, where people are sandbagging their homes and communities, while others are evacuating, the scenes out west are a preview of what is yet to come.

The same applies for many historic bridges and other key crossings, for reports of bridges being washed away by flooding or crushed by ice jams are cluttering up the newsfeeds, social media and through word of mouth. While dozens of bridges have been affected, here’s a list of casualities involving all bridges regardless of age and type that have come in so far. They also include videos and pictures. Keep in mind that we are not out of the woods just yet, and the list will get much longer before the floodwaters finally recede and the snow finally melts away. For now, here are the first casualties:

Trolley Bridge in Des Moines, Iowa: Spanning Beaver Creek north of I-35 between Iowa’s State Capital and nearby Johnston, this railroad trestle with two deck plate girder spans used to serve a trolley line going along the creek to the northwest. The line and the bridge were converted into a bike trail in 2000. On Wednesday the 13th, an ice jam caused by high water knocked over the center pier, causing the two deck plate girders to collapse. Two days later, the spans floated down the river with no word on where they ended up. No injuries reported. It is unknown whether the bridge will be rebuilt.

Highway 281 Bridge in Spencer, Nebraska: The Sandhills Bridge, spanning the Niobrara River was built in 2003. The multiple-span concrete beam bridge is located south of Spencer Dam. It should now be reiterated as a „was“ as the entire bridge was washed away completely on Monday the 11th.  A video shows the bridge being washed away right after the dam failure:

The main culprit was the failure of the Spencer Dam, caused by pressure from high water and ice. It is unknown when and how both the failed will be rebuilt, even though sources believe the bridge will be rebuilt and open by September.

Carns State Aid Bridge in Rock County, Nebraska: This Niobrara River crossing consists of five arch spans, a Parker through truss and a Pratt through truss- both of them were brought in in 1962 to replace a sixth arch span and several feet of approach that were washed away. The bridge ist he last surviving structure that was built under Nebraska’s state aid bridge program and is listed on the National Register. It may be likely that a couple additional spans will be needed as the south approach going to the truss span was completely washed away in the floods. Fortunately, the rest of the bridge is still standing.

Sargent Bridge: Residents in Custer County, Nebraska are mourning the loss of one of its iconic historic bridges. The Sargent Bridge was a two-span, pin-connected Pratt through truss bridge with Howe lattice portal bracings supported by 45° heels; its overhead strut bracings are V-laced with 45° heels as well. Built in 1908 by the Standard Bridge Company of Omaha, using steel from Illinois Steel, this 250-foot long span was no match for large chunks of ice, floating down the Middle Loup River, turned the entire structure into piles of twisted metal. This happened on the 14th. While a photo showed only one of the spans, it is unknown what happened to the other span. One variable is certain: The loss of this historic bridge is immense.

Green Mill Bridge near Waverly, Iowa: Time and wear took a toll on this two-span bowstring through arch bridge, which spanned the Cedar River between Janesville and Waverly. A product of the King Bridge Company, the bridge was part of a three-span consortium in Waverly when it was built in 1872. 30 years later, two of the spans were relocated to a rural road northeast of Janesville, where it survived multiple floods, including those in 1993 and 2008. Sadly, it couldn’t survive the ice jams and flooding that took the entire structure off its foundations on the 16th. Currently, no one knows how far the spans were carried and whether they can be salvaged like it did with the McIntyre Bridge in Poweshiek County. The Green Mill Bridge was one of only two multiple-span bowstring arch bridges left in the state. The other is the Hale Bridge in Anamosa. 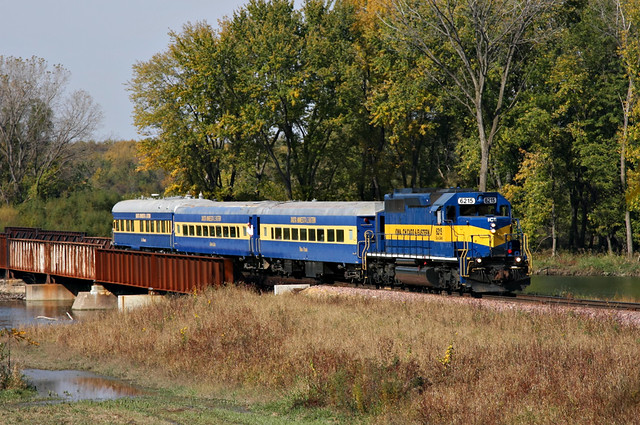 Turkey River Railroad Bridge at Millville, Iowa: This railroad span, located near 360th Street in Clayton County, has not had the best of luck when dealing with flooding. The two-span through truss span was destroyed in flooding in 1991 and subsequentially replaced by three steel girder spans. Two of them were washed away in flooding in 2008 and were replaced. Now all three spans are gone as of the 15th as flooding washed them all out. The rail line, owned by Canadian Pacific, has been shut down until a replacement span is erected with the freight trains being rerouted. It does raise a question of whether having a span in a flood-prone area makes sense without raising the railroad line.

Dunham Park Bridges in Sioux Falls, South Dakota: One of the first cities hit by ice jams and flooding, Sioux Falls was almost literally underwater with floodwaters at every intersection and street as well as the Falls being converted into an apocalyptic disaster, resembling a dam failing and the waters of the Big Sioux River wiping out everything in its path. One of the hardest hit was seen with Dunham Park as floodwaters washed away two mail-order truss bridges almost simultaneously. A video posted in social media on the 14th showed how powerful the floodwaters really were. The bridges were installed only a few years ago. It is unknown if other bridges were affected as crews are still battling floods and assessing the damage. It is however safe to say that the park complex will need to be rebuilt, taking a whole summer or two to complete.

There will be many more to come, as the weather gets warmer, accelerating the snowmelt and making the situation even more precarious. We will keep you informed on the latest developments. But to close this Newsflyer special, here’s a clip showing the raging Big Sioux River going down the Falls in Sioux Falls, giving you an idea of how bad the situation is right now:

That in addition to a reminder to stay away from floodwaters. Signs and barricades are there for one reason- to save your life. Think about it.

Our thoughts and prayers to families, friends and farmers affected severely by Mother Nature’s wrath- many of them have lost their homes and livelihoods and are in need of help. If you can help them, they will be more than grateful…… ❤