This entry starts with a little bit of irony. The bridge was supposed to be torn down beginning the 14th after the organization Friends of the Bockau Arch Bridge was unable to purchase the historic stone arch bridge for 1.7 million Euros- a price that was considered too high and the figure to fictitious to anyone’s liking. Because of a massive snowstorm that brought life in Saxony and parts of Germany to a complete standstill, it was pushed back to the 21st. As of this entry and visit to the bridge on the 23rd, the old stone lady is still standing, with no digger, no crane, no driller, no construction worker. At temperatures well below zero Celsius, it makes the planned demolition impossible. And with more snow and cold in the forecast, chances are very likely that the planned work may not even commence until sometime before Easter.

And that is a long ways away. However, this may be that window of opportunity that we need to turn it around and pull off an upset- a hat trick that is even bigger than the bunny the Ministry of Finance and Transport pulled. Already suggestions from nearby communities in Saxony indicate that people don’t want to part ways from this historic bridge just yet. In the newly consolidated Aue-Bad Schlema for example, there was a proposal to divert funding for renovating a club to go to purchasing and renovating the bridge.  In Beiersfeld near Schwarzenberg, one official suggested at least leaving the bridge piers so that a wooden bridge is put in its place. If covered, it would be a first in over 150 years. And even in Berlin, the petition to save the bridge is being examined as the federal government still owns the bridge and the highway that crosses it, although it’s crossing a new bridge on a new alignment.  So in other words, while the state is dead set on removing the structure, attempts to pull an upset is in the works. And as long as Old Man Winter hovers over the Ore Mountain region, there is still some hope to pull this off.

But how to do it?

We’re looking for any ideas to halt the demolition process. Rallies are possible, for we’ve seen this at many historic bridges in the US and Canada. Concerts as well. There is a possibility to donate to the group Friends of the Bockau Arch Bridge. But more importantly, we need some sources and people willing to step in and save a piece of history, one that can be used as a crossing for cyclists and pedestrians, fishermen and photographers, anybody who would rather see a piece of history in tact as is, and not in rubble.  The old bridge has potential, and is stable enough for use. We need some ideas and your help….. 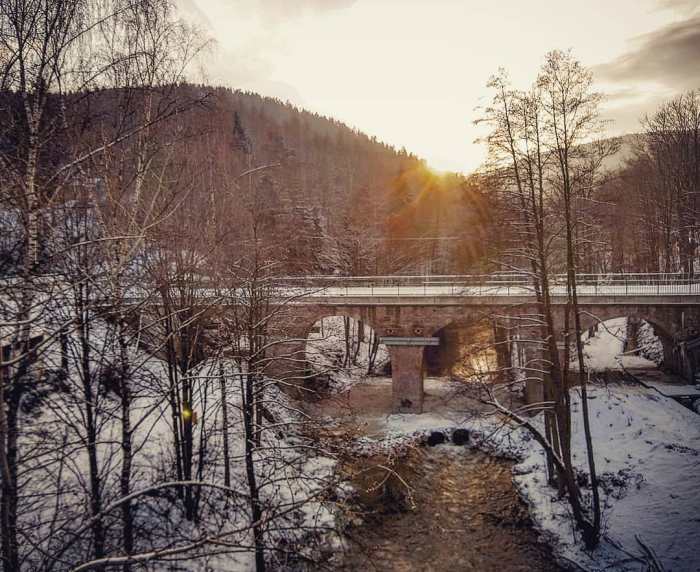 ….as long as the snow is there and no green.

You can send your suggestions here, but you can also contact the following representatives of the Friends of the Bockau Arch Bridge (Freunde der Rechenhausbrücke) using the e-mails below:

Please note that you should have your German language ready for use!

To close this, I would like to use a Cree Indian quote but adapted in this context, which goes like this:

Not until the the decking has been taken out

Not until the arches have been removed

Not until the piers are imploded

Not until the materials are hauled away

That it cannot be replaced with memories.

We will fight until the last brick leaves Rechenhaus.

For those who joined the Chronicles via Skrive, you can collect the information on the bridge by clicking here, and then following the updates so that you get a bigger picture and perhaps help.

Check out our facebook page here for photos and other information. You are free to follow and join in the conversation, regardless of language.