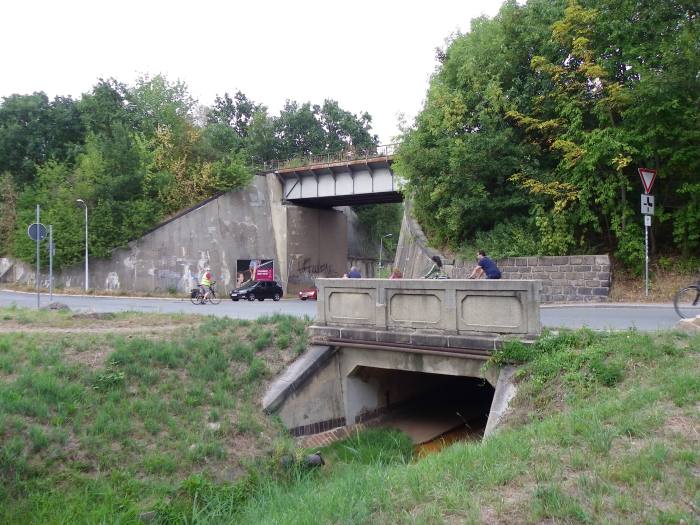 The 106th mystery bridge takes us back to western Saxony and in particular, the southern end of Zwickau, where at the junction of Fuchsgraben and Saarstrasse near the Glück-Auf Shopping Center, we have three bridges as part of the mix. Two of them are deck plate girder bridges (although one of them I was able to photograph during a bike tour back in September) that appear to have been dated back to the early 1920s, and it is unknown who built these structures. Each of them span Saarstrasse and have a length of 40 meters. One of the spans serves regional train service to Aue.

Even more interesting is a short, but rather beautiful concrete bridge located on the west end of the viaduct. It spans a creek that empties into the Zwickau Mulde at the Pöhlau Railroad Bridge and appears to be a box culvert. Yet the railings appear to have a Art Greco design, which is rather antique given its age. Bridges with Art Greco designs were common beginning in 1910 and while some served as railings for box culverts due to its short length, others functioned as a T-beam bridge, especially those with a length of more than 25 meters and whose railings are thick enough to support the roadway. Given its age, combined with its wear and tear, it is likely that the 10-meter long box culvert at Fuchsgraben is at least 85-90 years old. That structure has just been reincorporated into the city’s bike trail network, connecting Zwickau’s City Center and the suburbs of Planitz: Neu, Ober and Nieder. The city has plans to expand the network and make biking easier and safer for residents who live in these areas, connecting them with the existing main route along the Zwickau Mulde River.

If you know more about these three bridges, feel free to comment on them or provide some information via e-mail. The tour guide on Zwickau’s bridges will be updated to include this and a couple additional bridges found and documented, so any help would be much appreciated.

One thought on “Mystery Bridge Nr. 106- A railroad bridge and a street bridge in the park.”