This entry on the campaign to save the Bockau Arch Bridge (Rechenhausbrücke) can best be described in two words: hot and steamy! In the literal sense of the word, as I was approaching the Restaurant Rechenhaus where our meeting took place a few nights ago, I was greeted by barricades and steam rising from the road. First thought was whether the work had started to dismantle the old bridge even though the Petition to save the structure was still going through the state parliament in Dresden. That in itself would have breached the contract, signed in 2017, to keep the bridge in tact until the new structure was open to traffic. But with the drive to take the bridge down by members of the state parliament, combined with the rejection of the ownership of the bridge by the Mayors of Bockau and Zschorlau as was seen at the meeting in April, and lastly, the concrete bed that was poured directly into the Zwickau Mulde, which had violated natural preservation laws, it would not have been a surprise from my standpoint, speaking from experience helping others to preserve several bridges in the USA and Austria.

Fortunately, I was only greeted by this kind of steam…….

This was steam coming from a freshly paved road, as workers had already put the tar on there and flattened it with the steamroller. Hot enough to melt my shoes and not having time to take the longer detour, I took the chance and balanced the newly built narrow curbs that were installed to support the new road.  A balance act with a large backpack that reminded me of the time I balanced on a deck truss bridge in Missouri taking pictures, as seen below: 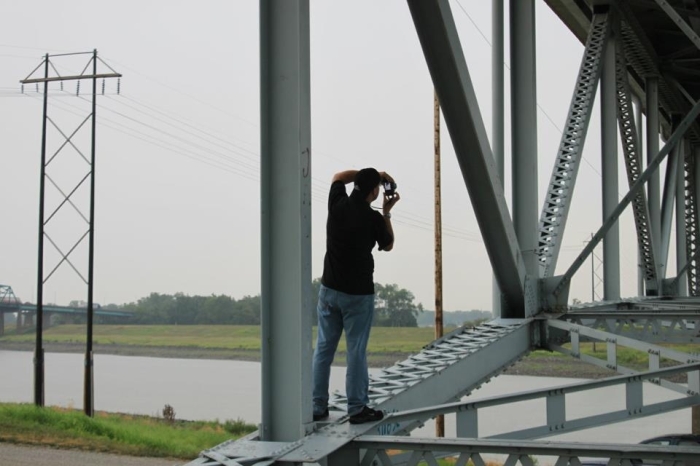 But when I got to the Rechenhaus Restaurant, located next to the two structures, it was just as hot and steamy in terms of the debate among our group members. If you wanted to warm up after a cold and rainy trip, one would not need the heater for that.  😉  We were currently in the middle of the debate as to what measures are available at our disposals, which ones would be feasible and which ones would not make the best sense. This included a formal complaint to the state and federal governments to put the demolition on hold until the Petition has been looked at and thoroughly; should the old bridge need to come down, the structure and its history will need to be documented thoroughly as it is still a German cultural heritage site.

Yet the time is still ticking and despite interested parties in purchasing the old bridge, there are four key deadlines to pay attention to:

November 22nd: The last “Petitionsausschuss” Hearing for the year in Saxony. If the issue with the old bridge is not settled beforehand, it falls into the new year in January.  As the bridge is still owned by the federal government and the Petition has been approved by the German parliament in Berlin, the last day of the hearing is the 14th of December.

December 25th (or even before that): The new B-283 Bridge will open to traffic, thus ending the 16-month long detour through Schneeberg in order to get from Aue to the Eibenstock Reservoir through Bockau. It will also end the 30-minute detour from one end of Bockau to the other with snail’s pace speed limits, potholes and (especially) additional construction.

17th January 2019: The last chance to debate on the bridge’s future in the Saxony state parliament. If the majority in Dresden says “yes” to private ownership of the bridge, then the group won. If not, then the decision falls to the federal government. If Berlin overrules the decision, then either the state can take the matter to the German Supreme Court in Karlsruhe or concede to defeat, allowing the private entity to take ownership. If Berlin favors the state of Saxony in its decision to remove the old bridge, then unless some legal measures are carried out to halt the process, the quest to save the bridge Comes to an end, and arrangements will be needed to remove the bridge from the Denkmalschutz (Cultural Heritage) List and commence with the demolition.

Spring 2019: This will most likely be judgement day for the old Bockau Arch Bridge, for either the structure will be under new ownership or demolition will commence once the snow melts and all the historical aspects are taken care of.

Like in other European countries, Germany has one of the strictest preservation laws which discourages demolishing the bridge. This means the bridge is protected until the Ministry of Culture and Preservation is forced to take the bridge off the list thus allowing for the demolition of the historic structure.  While the bridge is still listed, the plan to proceed with the planned construction of the new bridge and the demolition of the old one has led to the  Ministry having their hands tied behind their back because the contract explicitely said that the old bridge would be removed once the new one opens.  This situation is familiar for it happened to the historic railroad bridge over the River Danube in Linz, but this was because the referendum to save the bridge failed by a landslide margin.

Which brings up to the question you may have: What about a referendum? This was brought up at the meeting but was rejected due to time reasons, plus the stiff requirements- namely, the minimum requirement of 14,000 signatures would be needed. As sparsely populated as the region where the bridge is located, and as divided as the people are, one would need a lot of outside support to pull this one off. And even if the number was reached, the recipients- namely the district of Aue, which includes Zschorlau, Bockau and Schneeberg, would have to arrange a “snap” referendum which would require an absolute majority, which the Friends group does NOT have.

So what are we doing now?  We wait? No we’re not. We keep writing? Yes we are. Are we looking at alternatives to stop the demolition of the old bridge? You betcha! 🙂  We’ve started with a letter demanding a round table discussion with the ministries involved, including that of transport and finance, while putting a halt to the demolition plans. We have been looking for legal measures to file for injunction until the petitions are heard and decided upon. And we arre fighting on, which has reaped rewards up until now.

One of which includes new members of the organization and more interested parties willing to join in the crusade.

If you are interested in joining the organization Friends of the Bockau Arch Bridge, please click onto the link Aufnahmeantrag  below, print it out and complete it, then send it back to the people responsible for taking them on, namely:

For those in English: flensburg.bridgehunter.av@googlemail.com

This week’s Pic of the Week takes us to the Valley of the River Zschopau. Located in the central part of the German state of Saxony, the river has its starting point in the Fichtel Mountains north of Oberwiesenthal at the German-Czech border. Then the river snakes its way through the Ore Mountains for  130 Kilometers, creating valleys that are up to a kilometer deep and are very steep for driving.

And with these steep hills come numerous historic bridges that are either very tall or are hidden from view except when discovered with the lens of the camera and with a beautiful scenic background, as you can see here in this pic.

This was taken in the small village of Wilisch, 4 kilometers south of Zschopau. This bridge is one of four structures that are all within walking distance- all of them are well over a century old. This Town Lattice iron truss viaduct is located just west of the train Station and can be seen from the arch bridge that is right next to it. Dating back to the 1870s, the bridge used to serve a railroad running alongside the River Wilisch toward Gelenau. That river empties into the Zschopau, just 150 meters from this bridge.

Even though it has been abandoned for many decades, the bridge presents a gorgeous view with the camera, like you can see here, taken right in the middle of autumn with the leaves changing.

And what can we say? Speechless and beautiful. ❤  🙂