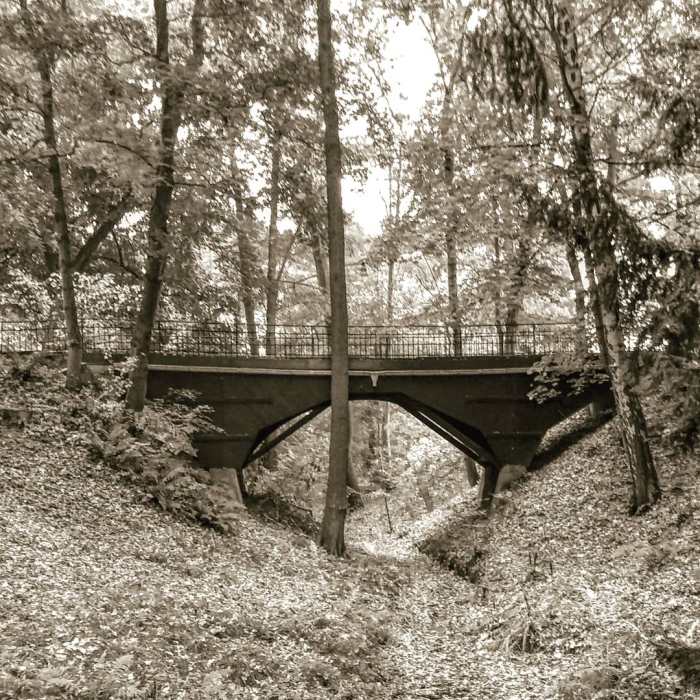 That is if this bridge is historic. It does look rather strange up close.

When driving along Crimmitschauer Strasse heading west and away from Pölbitz, a suburb of Zwickau in Saxony, one will see some housing developments along a small valley, where a creek runs through.  Going by the name of Weissenborner Bach (or creek), there are dozens of small crossings for pedestrians and filled-in crossings for cars to enable access to the housing there, where the average age for the houses and flats there are no more than a decade old.

Yet during a drive most recently, I found a hidden arch bridge located just off the highway, tucked away in the trees. It was then I needed to pull off to have a look. From a distance, one can see a typical arch bridge that is closed spandrel, regardless of the color in the concrete. Yet getting an even closer look at the structure, it turned out to be anything but that.

The bridge’s main arch was not round but polygonal, resembling a Parker truss design minus the vertical and diagonal beams. The same applies to the outer two arches, albeit not as visible as the main arch. The bridge appears to be built using wooden boards that had been cut up, which would partially answer the question of why the arch is polygonal. The boards are slanted and when having a closer look at it, one can clearly see the pattern. Normally for arch bridges, they are made of concrete or brick, with the latter having vertical and horizontal patterns.  When looking at the arches more closely, they are faux pa, meaning the bridge itself is a beam span, and the arches were added as decoration. When finding out that diagonal beams are supporting the bridge from inside the arches, one can conclude that the bridge is a kingpost deck truss that is flanked with faux pa, polygonal arches. The question is how old is the bridge, for given the condition of the wood, they appear to be not much older than 10 years.

Any ideas behind the bridge? And do you know of other polygonal arch bridges that exist? If you do, you know what to do. 🙂

The bridge was photographed right in the middle of Fall with the ground covered in leaves and the trees having a combination of red, yellow and light green. In Sepia form, it looks even spookier with the dark-colored bridge in the background. In either case, this pic of the week best fits with the season that is in full swing, even though we have had some warmer than usual weather- a sign of tough times to come.

But for now, enjoy the picture as well.