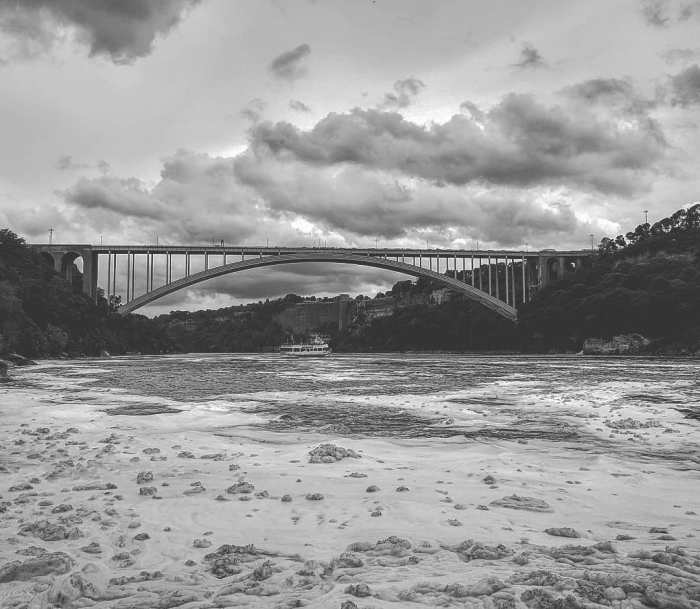 Looks can be deceiving, as we can see in this pic of the week. This was taken at Niagara Falls on the Ontario side looking at the Rainbow Arch Bridge. This bridge spans the Niagara River connecting the Canadian and American sides. When this was photographed, I decided to make it very grey, thus leading the people to think whether this river is completely dry and barren, or full but totally contaminated with thick chemicals that are strong enough to stop any boating traffic. You can have a look and judge for yourself.

Fortunately in reality, it was not the case, for we would not have done the boat tour towards the two falls and gotten soaked in the process. The boat tour started with a close-up of Horseshoe Falls (which was behind me when I took this) followed by a visit of American Falls, which is next to the bridge.  As will be seen in my article about Niagara Falls in the sister column The Flensburg Files, if you are there for the Falls, you should see it at level, from Skylon Tower and on this boat tour. Why, you will find out for yourself. In the meantime, enjoy this pic as there are more to come. 🙂

Glück auf! For those who are wondering, I created a Guessing Quiz on the German state of Saxony for the sister column The Flensburg Files in 2017. As I was putting together the answer key to this quiz, I decided to divide the answer key up and allocate the bridge portion to this page. You will find the quiz here and the answers here if you want to try it for yourself. Ironically, there is one on Sächsisch Deutsch which you can test your knowledge here if you wish.

But before writing further, lets look at the answers to the Guessing Quiz on Saxony’s bridges. They are below:

Information on the Bridges (and Bridge Builders) in Saxony:

1. When was the Dresden-Chemnitz-Hof-Nuremberg Magistrate railline completed?  How many viaducts in Saxony does this line have?

The line was completed in segments with the first one between Steinpleis and Zwickau having been completed in 1845 and the final segement between Flöha and Freibrg in 1869. A total of 13 viaducts can be found on the whole route between Hof and Dresden.

Goltschtal Viaduct in Mylau: Built in 1851 by Johann Andreas Schubert, this bridge is the longest one of its kind with a length of 579 meters.

Werdau Viaduct: This bridge was built in 1862 and has a length of 145 meters

Chemnitztal Viaduct in Chemnitz: Built in 1909, this steel viaduct has a total length of 275 meters. It had been scheduled to be demolished, hoever the German ministry of railroad ruled in March 2018 that the bridge is to be rehabilitated and restored as part of the project to modernize the Magistrate between Chemnitz and Glauchau.

Elstertal Viaduct near Elsterberg: This bridge was completed by Johann Andreas Schubert at the same time as the Göltzschtal Viaduct (1851) and has a length of 279 meters.

Steinpleis Viaduct near Zwickau: Built in 1845, this viaduct has a length of 126 meters.

3. Which city in Saxony does not have/ never had a bridge builder/ bridge engineering firm?

4. Bridge builder Johann Andreas Schubert who built the Göltzschtal Viaduct, was responsible for the building of Germany’s first b.  (multiple choice). The name of it was: Saxonia.

5.  T/F: The Blaues Wunder Bridge in Dresden, the work of bridge engineer Claus Köpke, was built in 1893, but survived the Huns’ desperate attempt of blowing it up at the conclusion of World War I.  (Mark T or F in the highlighted areas)

The Blue Miracle (which can also be used in English), designed and built by Claus Köpfke in 1893, survived the Nazi soldiers’ attempts of blowing it up in 1945, shortly before the second World War ended.

6. Where are these bridges located? Match the pictures with the names below.

7. Of these eight, which one is slated to be demolished and replaced in the next five years (unless the locals have enough petitions to stop it)?  Chemnitz Viaduct. See info under number 2.

Got you curious? Then get more curious and check out the following tour guides on the regions in Saxony that were done (and updated many times) by the author. Check out the Bridge Tour and Lost Bridges page from time to time as there are more tour guides to come that deal with the bridges in Saxony. 🙂 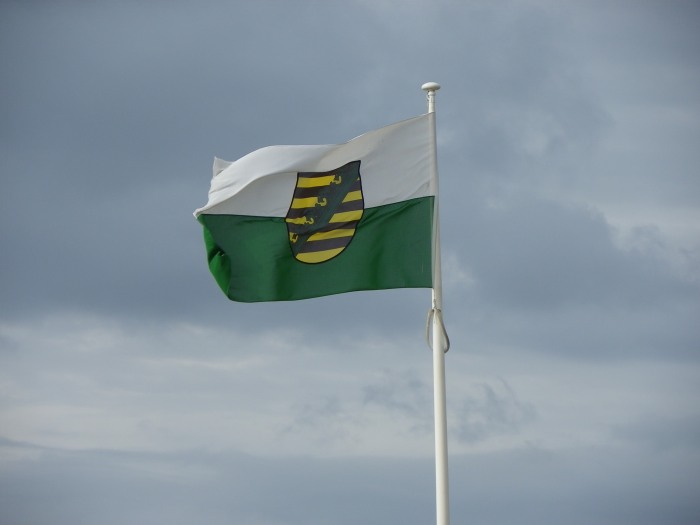