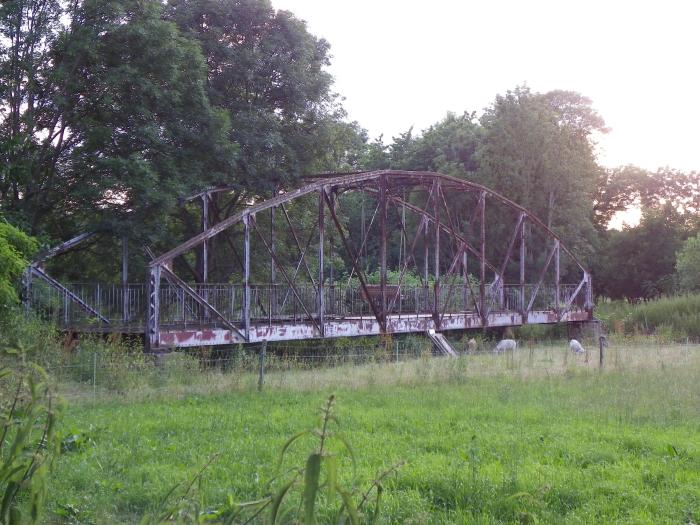 CHEMNITZ (GERMANY)- I’m going to be very honest for this mystery bridge, which is the 100th structure I’ve posted since launching the series in 2011. It was very, VERY difficult to decide which one to post next, for there was a large selection to choose from, ranging from an abandoned bridge along Route 66, a three-span through truss bridge in Oklahoma, a suspension bridge in India and this bridge. After some thorough consideration, I decided to go with the way that is the best in terms of my own merit as the structures have been mentioned by others in one way or another.

So here it comes: a through truss bridge that has been sitting on private land for a very long time, on the outskirts of a city that was for some time named after a Communist. Found by accident but not before almost getting my Volkswagen rammed into by a lorry behind me, who was cussing at me in Polish as he passed me by, after having parked my car off to the side. 😉

OK, the Polish guy part was fake news, but looking at the rest of the picture, one can see that you don’t need to fact-check this beauty.  The bridge is located just off Highway 107, three kilometers north of the Motorway A4 and the Exit Chemnitz-Glösa. It sits on private land next to the restaurant and hotel Landgasthof Draisdorf, around the curve.  It is an eight-panel Pratt through truss bridge, built using welded connections- meaning the beams are held together by gusset plates and are not inserted into the plates, like we would see in other truss bridges. The end posts are typical for many European truss bridges built during its time: vertical instead of angled. The portal and strut bracings feature V-laced bracings with curved heel bracings. The middle strut heels appear to be subdivided.  The bridge can be seen from the highway- although it is not recommended to stop because the highway curves around the Landgasthof and one could risk such a rear- ender plus an explanation with the police to follow.  The bridge is about 5-6 meters tall, about 30-35 meters long and 3 meters wide, judging by my presence at the bridge and the photos I took of the bridge. While the bridge is one of five known in Chemnitz, this is the only through truss bridge within the city limits, counting the village of Draisdorf, where it sits.

The fun part comes with the history of the bridge. My first judgement of the bridge was that it was located over the River Chemnitz at Heinersdorfer Strasse and it was pulled offsite and to its current location after a new bridge was constructed 100 meters to the south. The truss bridge was replaced by a new bridge in 2005.  You can see the points mentioned on the map. However, research by the Saxony Ministry of Historic Monuments and Preservation (D: Landesamt für Denkmalpflege Sachsen) in Dresden indicated that this truss bridge was not originally located at Heinersdorfer Strasse but at Fischweg near the cemetary in Glösa, only 400 meters south of the motorway exit. The map indicates that a bridge does exist but in a form of a bike and pedestrian crossing for the street ends on the grounds of a factory nearby. The date of construction of the bridge is 1900 and is currently listed in the Preservation Handbook for the State of Saxony (Denkmalschutzliste).

This leads us to the following questions which your help would be much appreciated in contributing whatever information may be of use: 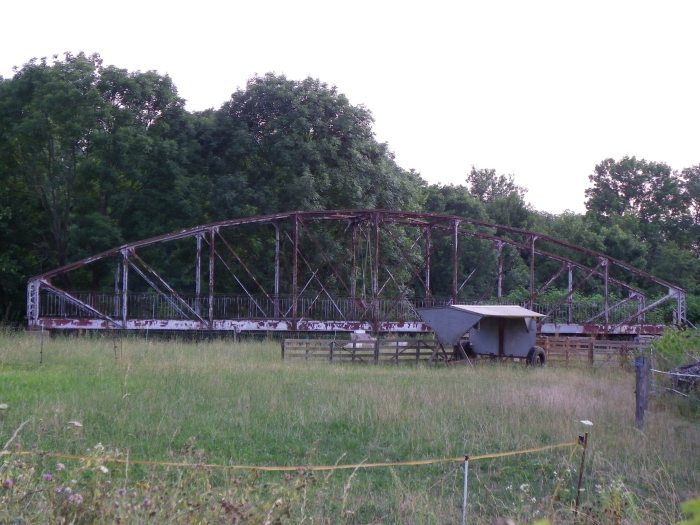 It’s not every day that a person and/or party steps forward to purchase the bridge and keep it for reuse. The bridge is privately owned and judging by my observations, it is being used as a picnic area with a porch swing attached to the top strut bracing. For most historic bridges that are purchased by private groups-namely homeowners, they are normally used for picnic areas and other forms of recreation more than for pedestrian and bike crossings because of liability reasons. It is different in comparison with private parties in the form of associations, park and recreational groups and the community that have more resources (including financial) to make sure the crossing is safe for reuse. But nevertheless, this bridge is safe and will most likely be in the hands of the homeowner until the need to get rid of it is near. When that happens, it can be hoped that the bridge is put back over the Chemnitz as a bike crossing. With the Chemnitztal Bike Path being extended and paved to Wechselburg, it would not be a surprise if this bridge was called to duty again given its preservation status and the interest in keeping it for generations to come.

And this is what makes this unexpected stop the most memorable- finding out the unknown about a structure like this one, which is truly a hidden gem.

And as we are on the same page, the next mystery bridge will go further downstream where a pair of structures are being refitted for bike use. More on this one in the next article. In the meantime, enjoy the photos here as well as on BHC’s facebook page.  And as for the aforementioned bridges at the beginning of the page, they will come later.

Author’s Note: Chemnitz was once named Karl-Marx-Stadt when it was under the rule of the German Democratic Republic. It even had a head statue of Karl Marx that can still be seen today. From 1953 until 1990, it was known that way.