There are two basic ways of telling that the Royal Albert Bridge between Plymouth and Saltash is the work of engineer/architect/visionary Isambard Kingdom Brunel. The first is that it looks like nothing else on the British railway network. Brunel – Benjamin ‘Dizzy’ Disraeli to Robert Stephenson’s William Gladstone – was a true one-off. He wouldn’t have recognised a conventional design solution if it had come up to him, ground his famous cigar underfoot and then jumped up and down on his top hat. Brunel seems to have been engaged in a lifelong search for the biggest, the widest, the flattest, the broadest, the most spectacular, the most unusual.

The second way you can tell is this: 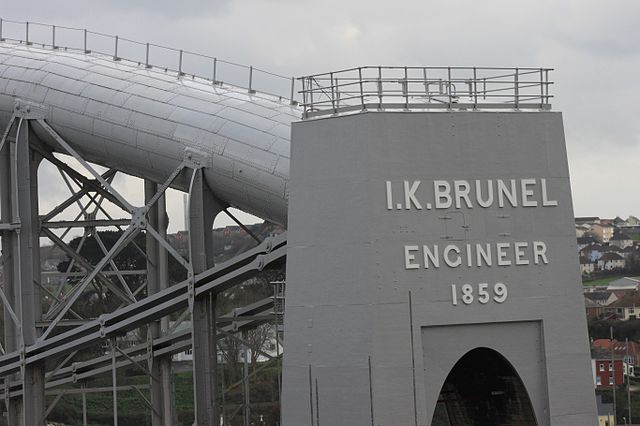 …which does rather give the game away, though the inscription wasn’t there when the…

Bridgehunter's Chronicles The Bridgehunter’s Chronicles is a column produced by the author that focuses on historic bridges both in the USA as well as in Europe that tourists should visit before they are replaced or removed. Each bridge is profiled with the goal that people are aware of its existence and can take action regarding saving them. The Chronicles also provides a tour of some of the regions in both of the aforementioned areas, where there is a dense number of historic bridges that exist, with a goal of encouraging tourists to visit these areas and encourage others to add the place to their travel itineraries. And finally, the Chronicles provides readers with news stories of historic bridge preservation efforts, events involving historic bridge (preservation)- such as the Historic Bridge Conference, bridge symposiums, etc., discussion about historic bridges, preservation and education about them, and literary work on historic bridges that were released to the public and the public should read about.
Published 3. July 2018