While travelling along the main artery connecting Munich with Berlin, the Motorway 9, one ought to consider turning off at Schleiz and following the Highway B 282 and E 49 in the direction of Plauen for a good 15 Kilometers to the east, heading into the small but rather active village of Mühltroff. With a population of 1800 inhabitants, Mühltroff straddles the river Wisenta and is one of the oldest villages in Saxony; it was first mentioned in 1274 and was officially declared a town by the district of Plauen in 1327. It was once a fishing community and ist shield reflects the hertitage of the community. With its historic houses lining up along the Wisenta, Mühltroff resembles Little Venice alá Vogtland, even though fishing no longer exists today, and only three bridges are known to exist.

One of them is the focus of the author’s stop on the journey, the Hopfenbrücke.  The structure is one of the oldest in Saxony, having been built in 1396, and was the main crossing connecting the eastern and western halves of the village until after World War II. The structure features a one-span stone-brick arch bridge, which is anchored by houses on both sides of the Wisenta. Judging by the setting of the bridge, on each corner of its abutment was a historic house, and it appeared that there was an entrance on both sides at one time, resembling the housed bridges that were built during that time- among them that exist today still are the Krämerbrücke in Erfurt and the Rathausbrücke in Bamberg. Sadly, despite its historic appeal, the houses on the western side will become history for one became a garden a couple decades ago and the other will be removed before the end of 2018, according to recent newspaper articles.

The name Hopfenbrücke has nothing to do with the beer route nor a brewery for Mühltroff had neighter of them according to record. In fact, the community has a palace dating back to 1349, a windmill dating back to the 14th century and a textile industry that started in the 15th Century and is one of the key aspects of Mühltroff to this day.  The Hopfensbrücke was named after the Hopf Family, whose house was next to the bridge and who also owned a shop at the structure until the beginning of the 1900s. The road it carried was a main route connecting Schleiz and Plauen, where horse and buggy first crossed, followed by cars. By the end of the second World War, there was a need to realign the road, especially to accomodate the military vehicles that had to be stationed near the border that had once divided Germany until 1990 when it became Saxony and Thuringia on the northeastern edge and Bavaria to the southwest. Therefore, another arch bridge was built to the north of the bridge, but unlike its neighbor, it was a Luten arch span and was made of concrete. That structure still carries traffic, and one can see the stone arch bridge 100 meters away while crossing the Wisenta.

The bridge was reopened recently after having been closed for rehabilitation. The cost for the work was 460,000 Euros and it consisted of strengthening the arches, removing the concrete facade covering the arch span and making repairs to the structure. It had been damaged by flooding in 2013 and was declared unsafe to cross. However, with the grand opening last Friday (the 7th of June), the community welcomed the bridge back with open arms. And it was good that way; despite its population and size, Mühltroff happens to be one of the livelier of the communities, with people walking the streets even in the evenings, music being played in the apartments, and apartments having colorful facades to make it look attractive to the tourists. Even the market square, which starts at the historic bridge and goes down the main street to the castle is narrow and enclosed, but lively. Next to the bridge across from the City Hall is the East German Museum, where people can visit, see the artefacts that were typical during that period before 1990 and learn about its history.

But inspite that, the people are happy to have their historic bridge back. After 600 years, the structure still symbolizes the community and its heritage- a former fishing community that is still today the Little Venice of the Vogtland. One can see the palace and historic windmill, but the visit is not complete without seeing the bridge, the structure that will hopefully continue its service for another 600 years. So take some time in Mühltroff and don’t forget the bridge. 😉 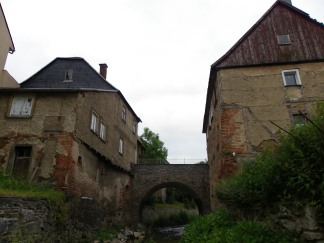 Mühltroff is only three kilometers east of the Saxony/Thuringia border. It had belonged to the District of Gera and on the Thuringian side from 1949 until March 1992, two years after Germany reunited. It became part of Saxony in April 1992 and merged with neighboring Pausa to become a joint community in 2013. Today, the community belongs to the Vogtland District, whose county seat is (none other than) Plauen, which is 22 kilometers to the east.

One thought on “Hopfenbrücke in Vogtland”