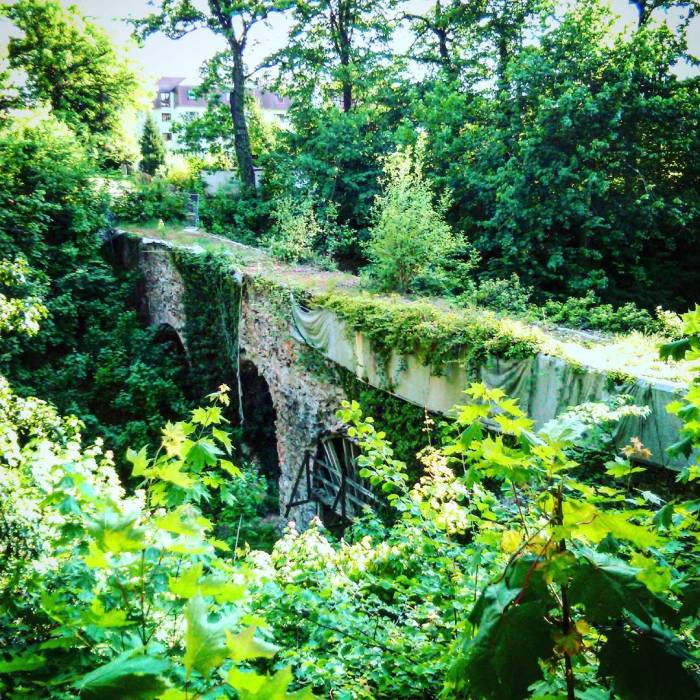 What’s in a name? A bridge is just a bridge as it crosses a ravine, body of water or even a roadway from point A to point B. This is where this week’s bridge pic comes in. A “natural” bridge spanning a deep ravine connecting a park with a castle……

The Hirschgrund Bridge has been in the news recently because construction has yet to begin on this 300+ year old stone arch structure. Why has there been a delay?  You’ll love the author and the Glauchau City Council for this….. 😉

The debate over the name of the bridge!

In March of this year, the contract was let to a company for rebuilding the bridge, the name Hirschgaben Bridge was used. However, in the documents on the city’s budget plans was the name Hirschgrund used. This caused a lot of confusion as to how the bridge should be named. On the on hand, Hirschgraben was used because the ravine surrounding the castle was very deep – on the same level as the riverbed of the Zwickau Mulde River- a difference of 30 meters. Geologically speaking is Hirschgraben correct. And according to oral history is Hirschgraben the name used when talking about the bridge and the ravine. Historically speaking, Hirschgrund is also correct as it focuses on the whole complex itself, which includes the castle, park and ravine. In most history books one will find Hirschgrund. Yet given the preference of one or the other, the names of both were both correct, according to multiple sources.  Given the need to cross their Ts and dot the I’s the debate on which name is correct was one of the reasons for the delay in allowing the construction to start.

The other was the city council’s rescinding of the contract to the first firm in favor of the second because the costs were cheaper and the second one was left out of the discussion the first time around. There had been four but only three officially presented their proposals.

In either case, now that the matter over the name has been settled, not to mention the costs and time wasted in “yammering” about it, construction on this natural bridge is about to begin. June is the starting date and the project is expected to take a year to complete. How the bridge will be rebuilt will be presented when the finished product opens to foot traffic for privacy purposes. But it does lead to the question of how this bridge- abandoned for almost five decades- will be reconstructed…..

….or whether it should remain as is: a natural bridge. If that was the case, then the City of Glauchau would learn a great deal from the City of London’s Natural Bridge project.  🙂

This was the reason behind this pic of the week after my visit to Glauchau. Not to mention to the plea mentioned in the Instagram page: It’s just a bridge! Fix the damn thing for once!

Fast Fact: Yammering is German for “jammern” and means simply to complain a great deal like a kindergartner.