Two Goltzsch River Bridges two kilometers from each other to be replaced with modern structures due to age and liability.

AUERBACH (VOGTLAND), SAXONY (GERMANY)-  There are three ways of justifying the demolition of a historic Bridge, regardless of design and age. The first, as we are seeing with the Frank Wood Bridge in Maine, is the sugar-coating of the public in believing that the new Bridge will last 100 years, never Need maintenance and will look nicer. 99% of the time are These Facts rather fake when fact-checking their Arguments. However, the second and third are just as common as the first, and are being practiced on a pair of bridges west of Schneeberg in the Vogtland Region of the German state of Saxony. One is negligence but to a Point where Rehabilitation is next to impossible because of exorbitant costs. This is the reason behind the demolition and replacement of the Riss Bridge (Rißbrücke) in Rodewisch. The third is the argument that the Bridge can no longer carry traffic, even if it was rehabilitated. This is the case with the Schulstrassebrücke in Auerbach. Both bridges span the River Göltzsch, which flows to the longest stone arch bridge in the world, the Göltzschtalbrücke near Netzschkau and flows parallel to the main Highway, B-169. Both bridges are two kilometers away from each other. And two bridges are the subject of the Chronicles’ Newsflyer article.

This bridge carries Park Street and cuts through the city park enroute to a church and Stone arch Bridge, 400 meters to the east. It can be seen from the main highway on the west bank. This 40 meter long closed spandrel arch bridge is at least 90 years old, but has been the subject of neglect, for spalling cracks on its abutments peeling on ist facade have weakened the structure to a point where it has been closed to all but pedestrians and cyclists for many years. Furthermore, the original railings have deteriorated to a point where concrete parts are falling into the river and the metal endoskeleton has appeared on 80% of the railings. Attempts to catch the falling debris using a net has been proven futile. In September, residents voted unanimously to replace the structure with a modern one, which will be a cable-stayed bridge with leaning towers. Since the start of April, workers have cleared away trees and bushes to get to the Bridge. It is scheduled to be demolished beginning in June, and the new structure will be open to traffic by the beginning of 2019. While lack of funding during the East German period may have played a role in allowing the bridge to fall apart, that funding had not been available to restore this bridge since 1990 and it has raised the question of priority between the bridge and other places that have been restored in and around Rodewisch. Sadly this bridge has gotten the wrong end of the stick and for those wishing for a new modern structure, their wish will come true soon. 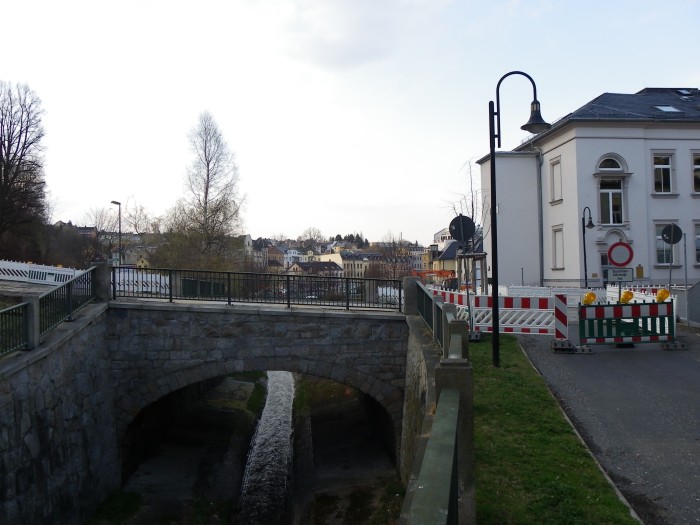 SCHOOL STREET BRIDGE (SCHULSTRASSEBRÜCKE)  IN AUERBACH: Since Easter, work has started to remove this unique brick arch Bridge connecting the City Center with the main Highway. The bridge was built in the late 1890s using granite mined from the Ore Mountains and had been rehabilitated just after the Fall of the Wall. Despite that, the 20-meter long structure is too narrow and light for trucks and therefore, the bridge will be replaced. The replacement structure will be twice the width of the 13-meter Bridge and will include turning lanes more convenient for the growing traffic. Yet questions remain about the justification of replacing the bridge because of the traffic going through the City Center already. Plus the arch structure appeared in great shape at the time of the author’s visit. Nevertheless People will suffer from the inconvenience for the next half year as the old will come out in favor of the new which will be met with mixed results come time of ist opening in the fall.