Nur Heimat gibts nichts- There is never just a homeland.

This is a comment that I remember during my first meeting with the committee to save the Bockau Arch Bridge. Located over the Zwickauer Mulde River six kilometers southwest of Aue in western Saxony, this 146-year old stone arch bridge is one of a few historic landmarks left in the town of Bockau, with a population of 2,100 inhabitants. Closed since the end of August 2017, I had the dubious priviledge of having to make a detour of enternity in order to arrive at our first meeting. This meant going up the hill along Bockau Creek (which the over 800-year old town was named after), then making a pair of sharp curves going right onto a narrow street which leads me out of town, but not onto the bridge that has been blocked off completely. I had to drive another 15 kilometers on a paved road full of sharp curves, potholes, cracks, ice, and wolves roaming about in the forest until I reached the Eibenstock Reservoir. There, I crossed the next bridge and backtracked on the main highway going on the opposite side of the river which led to the meeting place next to the closed bridge- The Rechenhaus Restaurant. There, I was greeted by the welcoming party, despite my 45-minute late arrival, with happiness and joy that an American was coming to help. 🙂

How did I end up here in the first place? And why do a documentary on an old stone arch bridge that no one really knows much about?

As the two pigs Piggeldy and Frederick would say “Nicht leichter als das.” (No easier than this):

I’ve been a bridgehunter since I was five years old, having photographed and written about tens of thousands of bridges in 14 countries (including the US) and 14 states in the US (including my home state of Minnesota). In Germany, I’ve covered all but three of the 16 Bundesländer. This includes Saxony, the region I’ve been touring since 2016. I’ve been running the Chronicles since 2010 and have worked with groups on how to not only restore historic bridges but also how to make them attractive for tourists. This includes my involvement with historic bridge conventions as coordinator and speaker and my use of social media to garnish the attention of interested readers and other history enthusiasts. I’m also a teacher of English, which I’ve been doing since 2001, and since August 2017, I’ve been based full-time at the Saxony Police Academy in Schneeberg, located only three kilometers from the Bockau Bridge. It was also the same time period as my time in Saxony that I’ve done tours in the region, be it in cities like Dresden, Rochlitz, Leipzig, Glauchau, Zwickau, Aue/Schlema and Chemnitz, just to name a few, or along rivers like the Mulde and Elbe. And it was these bridgehunting tours that got the attention of the regional newspapers, namely the Free Press in Chemnitz, whose news reporters at the regional offices led me to this group saving this particular bridge.

And as for the bridge itself, it has more history than many locals know about. It was built in 1872 and is made of natural stone from the Ore Mountains. It took approximately a full year with lots of manpower to construct a multi-span stone arch bridge that connected Bockau with Albernnau and Zschorlau on the opposite side. At approximately 200 meters in length, the bridge is the longest in the western Ore Mountains and second longest along the Zwickau Mulde River.  A local restaurant with the name Rechenhaus was the site of the dam and lock area and headwaters plant, which were built between 1556 and 1559. The first bridge- a wooden covered span- was built in 1559 spanning the river and canal complex. The flow of the water was ideal for transporting materials downstream, and workers constructed several canals in the mountain region less than 90 years later. Even the headwaters plant was once a mill before it eventually became the barracks for the 11th Panzer Division of the German Army during World War II, where they used the bridge to march into Czechoslovakia and Poland.

In an attempt to slow down the progress of advancing soldiers from the east, the 11th Panzer Division was ordered to detonate the bridge in April 1945. This is the same tank division of German army that had fought (and lost) at Stalingrad, Kursk and the Battle of the Bulge before retreating towards Germany. Yet a brave unknown soldier did the unthinkable and  relocated the bombs to a temporary bridge in Fährbrücke (south of Zwickau) before blowing that bridge up. This allowed for the Soviets and Americans to easily cross the bridge with their tanks with ease while setting the people free in the process. The 11th Panzer surrendered in Passau on 2 May, 1945, six days before Germany capitulated.  The same bridge was used again 23 years later, as soliders from the Warsaw Pact armies, consisiting of mainly Russians and East Germans crossed this bridge enroute to Prague to quash the Spring Movement.  By that time, the headwaters house, which had been the barracks, was converted into the Rechenhaus Restaurant, which still serves customers today.

The bridge was renovated in 1988 when  concrete decking was added and the arches were reinforced with steel bracing. The bridge has been listed by the German Preservation Commission because of its cultural significance. Yet despite all the history that is involved with this bridge, the historical monument has become a stranger to people in the region, having somewhat lost its face in the eyes of the locals. The mayors of Bockau and Zschorlau would like to see the bridge gone once its replacement opens. The same with the state of Saxony and the German government, both are championing a 6.4 million Euro project to replace the old bridge. And despite the petition going around for saving the bridge, a handful of politicians are interested in keeping the bridge for pedestrian use after the new structure is built- most of them with little affiliation with the region with the exception of the Green party.

And this is where I come in.

Our first meeting at the Rechenhaus Restaurant, the historic building which once had the barracks but was originally the headwaters mill and dam complex. The restaurant has a very Erzgebirge taste to it, with a collection of incense men and wood-carved chandeliers. Opposite the entrance to the restaurant is a mahoghany-framed painting of the dam and mill as it was in the 16th century. Some in the committee would like to see it again as a way to slow the flow of the Zwickau Mulde. The river had flooded towns downstream on six different occasions since the bridge was built, with the worst of them having occurred in 1954, 2002 and 2013. Given its proximity to the bridge, many would like to see the restaurant as is. Yet its location during the construction period has become a painful inconvenience. Talking to the restaurant owner, he was deeply disturbed by the construction and stated that since the project started, he had lost up to 60% of his customers. Whether he can compensate once the new span opens remains unclear.

We were nine people minus the restaurant owner, each one with a new set of ideas on how to keep and possibly fix the bridge so that it can be used again. Yet as seen with the American historic bridges, money needs to be there in order for it to happen. Political connections needs to be there in order for it to happen. The same with the use of media and lastly support from the public. As with all historic bridges, the public is the first line of offence in pursuing the preservation of historic bridges. Whether it is with petitions, technical know-how or even planning events, they always have the ideas first before our elected officials. After that, we get the attention out there via social media. Through that and the events, the politicians come in with bills to approve measure to restore the bridge. Then the money comes in to pay for the costs. 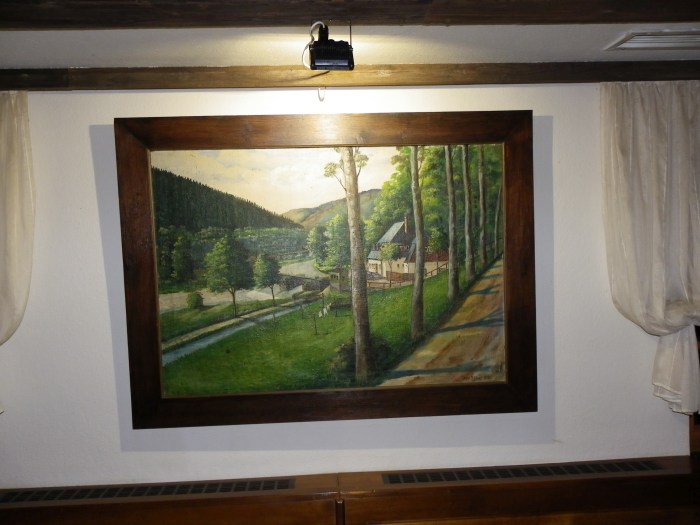 For our bridge in Bockau, we’re already at step one, which is public interest. A petition with 1700 signatures was sent to Dresden to the state parliament. Another one is in the works which includes an English version for people to sign and establishing a website. That will be my job for right now- an important one! Speaking from experience with the Green Bridge in Des Moines, gathering interest in social networking will make waves and influence the thinking of the higher-ups of politics and business. Once that is established and we have the English version to submit to Dresden, the next plan is to meet with officials in Dresden to discuss the situation and ways to make the historic pedestrian crossing a reality. A big plus is the fact that the bridge and the mill area are historic lanbdmarks which make it impossible to tear down unless ordered by the federal government. How that works will come in a later article. Then with the connections and planning will be the events. This is where the tough part comes in. How to make this bridge attractive to tourists of all age? We’ve looked at drawing contests, concerts and the like. But what else could be do there? And how can we raise money for the project? This is independent on any funding available for rehabilitating the bridge, which is scarce at the moment, but the search continues.

It’s a battle that one can lose but it’s better to die trying than to sit and do nothing. The mentality has increased in the US over the past decade, yet Germany does have a lot of pride in its history and culture, too much of it to just sit and do nothing.

And with that, I must set to work. I have my expertise to use and share, while others are garnering some more support from locals and interested people in the project. Therefore, what are we waiting for? Get to work!

More on my involvement in the preservation project to come. Stay tuned! 🙂

5 thoughts on “Saving the Bockau Arch Bridge- An American’s Perspective: Day One”