SCHNEEBERG (SAXONY), GERMANY- 2018 is here, and with it, the revealing of the winners of the 2017 Othmar H. Ammann Awards. This year’s awards ceremony is far different than in years’ past. For instance, instead of announcing the winners in nummerical order from top to bottom, the top six winners receive a medal in a combination of Olympics and Ore Mountain form. That means the top three finishers receive the typical Olympic medals, whereas 4th to 6th place finishers receive medals typical of the Ore Mountain region in Saxony in eastern Germany, the new home for this column (specifically, in Schneeberg). That means tourquoise, copper and iron ore to those respective finishers. To view the total number of candidates please click here for details, including how they finished.

This year’s awards set some impressive records that can only be bested by more participation and more awareness of the historic bridges that we have left in general. For instance, we had records smashed for the highest number of voter turnout in each of the nine categories. Furthermore, there were at least seven lead changes in each category, which was also a first. In four of the categories, there were lead changes with at least four of the candidates. In another category, each of the candidates took a shot at first place and stayed at the top for at least a week before it was dethroned in favor of another one. In summary, no leader was safe regardless of margin that was built with its second place competitor. 🙂

And with that we will take a look at the winners of the 2017 Ammann Awards, divided up into two parts so that the readers are not overwhelmed with the content. The winners of the 2017 Author’s Choice, where the author himself picks his favorites, will follow. But for now, let’s see what the voters have chosen for bridge favorites beginning with…..

This year’s Best Photo Category brought in not only double the number of candidates as last year (12 entries) but also double as many candidates that vied for first place as last year- there was a battle among three candidates for the top spot for the 2016 Awards. All six candidates finished in the top six with Chauncy Neumann bringing home the gold for his night photo of the Rock Island Railroad Bridge in Little Rock, AR., a fine example of a rail-to-trail crossing that still has its use in its second life today. His photo can be seen in the Chronicles’ facebook page as well as an avatar for the Chronicles’ twitter page. The silver medal went to Esko Räntilla for his stone arch bridge, built in the 1700s spanning a small creek in Finnland. That photo can be seen in the Chronicles’ wordpress page. Third place finisher receiving the bronze was Kevin Skow for his shot of the pony truss bridge Mill Creek in Kansas. His photo can be seen on the Chronicles’ twitter page. All of them will remain to be seen until mid-July before they become part of the header rotating page for the Chronicles’ wordpress page. The rest of the results:

This category is divided up into American and International Bridges and focuses on historic and unique bridges that receive little to no attention compared to other historic bridges, like the Golden Gate and Brooklyn Bridges in the States. In the international part of the category, we had 14 entries from three continents with four vying for the top spot. In the end, the winner of award goes to a small village north of Zeitz in Germany and this unusual bridge, the Draschwitz Truss Bridge over the White Elster River. This bridge is unique because of its v-laced top chord. The story behind it can be found here. Silver goes to the suspension bridge at Betsiboka in Madagascar, whereas Bronze goes to another unique arch bridge in Greece nominated by Inge Kanakaris-Wirtl, the Plakidas Bridge. The rest of the top six include:

In the States, we had ten entries, featuring bridges from all over the country. This included a “dead bridge”- one that has been extant for many years, yet one decided to nominate it post humously. As in the international portion, four of the ten vied for the top spot, but in the end, the Sarto Bridge, spanning the Bayou des Glaises at Big Bend, Avoyelles Parish, Louisiana came out the winner by a slim margin, outlasting the Johnson Bridge in Stillwater County (Montana) by five votes. That “dead bridge” mentioned earlier, was Sugar Island Bridge in Kankakee Illinois, came in third with 88 votes- a bronze medal well earned a century after it was converted into a pile of scrap metal. The bridge was destroyed by a tornado in 1916 and was replaced afterwards.  The rest of the top six include: 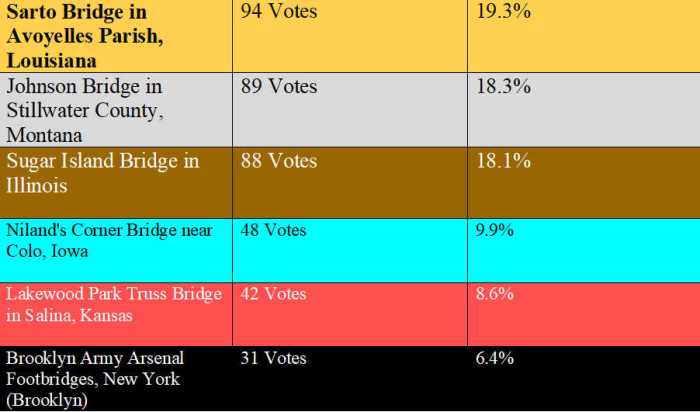 Twelve bridges were entered in this category, of which three came from the States and the rest from Germany. Still, the winners of both the international and American competition were clearly decisive with the American bridge winning the all around by a wide margin. That was with the Geneva Creek Bridge in Muscatine, Iowa, a Bedstead Howe pony truss that features two spans and was relocated at an unknown time. Information on that is enclosed here. The ancient arch bridge in Erfurt won the international division but came in second in the all around. That bridge spans a small waterfall that empties into the Diversion Channel on the south end of the city in Thuringia. It may be the oldest extant structure in the city’s history. For more, click here. Not far behind was another competitor from the German state of Schleswig-Holstein, a thatched-roof covered truss bridge in St. Peter-Ording, whose unique story can be found here. The rest of the standings include:

The rest of the winners can be found in Part 2. Click here to get there. 🙂