CHARLESTOWN, INDIANA/ LOUISVILLE, KY- There is one variant that makes a person go nuts when it comes to the future of a historic bridge, and that is the use of modal verbs. Modal verbs are used to support the verb in a sentence. No matter which language you are learning, each modal verb has a set of at least five words, each of which has at least three different functions.

In English we have ten different modal verbs, yet four of them we will focus on are may, might, can and could, as they are all interconnected in a sense of meaning and use but how to incorporate them into the context is exceptionally difficult for they may or may not fit pending on the situation.  That means may, might, and can have the meaning of a possibility but how it fits is tricky because the road can be closed if the weather is bad, the road might be closed because of the weather (meaning watch for the weather report and road signs), the road may be closed but based on permission by the authorities to close it, the road could be closed as a possibility if and only if there is an alternative, and the road can be closed because of the permission to close it, period.

Do you see what I’m saying here?   If not, then you are not alone, and with this bridge that we’re talking about, it is even more confusing.

The County Road 403 Bridge, spanning Silver Creak near the towns of Charlestown and Hamburg in Clark County was torn down recently after a new bridge was built alongside it. The bridge was built in 1941 by A.G. Ryan and Sons and featured a one-span Parker through truss bridge with riveted connections and X-frame portal bracing. With the main span being 199 feet, the total length was 201; the bridge’s width was 25.6 feet.  Aside from age, the bridge had to be replaced because of its height clearance which was 14.8 feet.

The bridge had been in the market by the Indiana DOT and the State Historical Preservation Office because of its potential to be nominated to the National Register of Historic Places. Yet the way it was marketed was rather confusing at best. This was in part because of this sign…..

This is where the use of the modal verb “may” caused confusion for it could have meant one of the following if deciphered carefully:

This historic bridge will be replaced.

There is a possibility that the bridge will be replaced.

Even though the agency had a telephone number to contact to inquire more about this bridge, chances are that there may have been more people on the other line who would have had different answers to the question of:

Will this bridge be replaced and

Can I buy the bridge?

If Indiana had been serious about this bridge, it would have had better signage that indicated that the bridge was for sale using specific language- a sign that would have looked like this:

Plus a little bit of information.

Simplicity is key but in a way that everyone understands. Sadly, the use of modal verbs resulted in this bridge’s downfall. But a lesson that should be learned from this is this:

You must be specific!

To better understand the use of modal verbs, check out the modal verbs presented in the sister column The Flensburg Files, especially with the story of I Wish, where you can make use of the story AND the modal verb exercise. 🙂 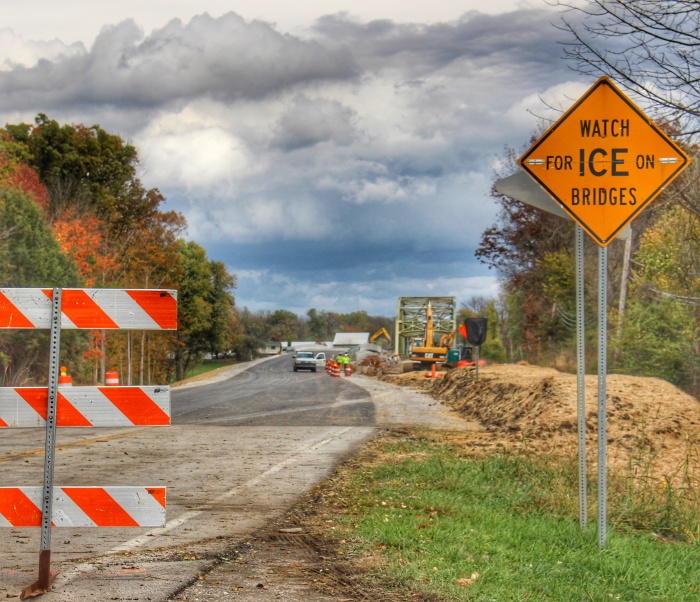