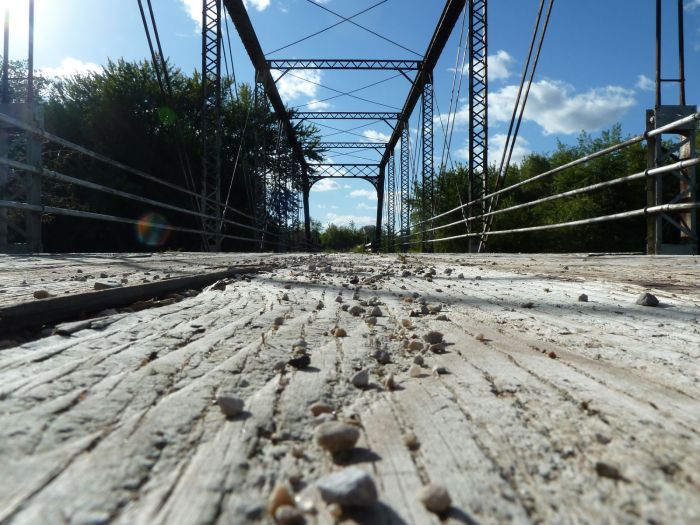 During the summer of 1998, I embarked on a bridgehunting tour along six rivers in northern Iowa, among them the Des Moines River. Before splitting into the East and West Forks, the river literally cut the state and its capital Des Moines into two up until Frank Gotch Park south of Humboldt. Then before entering Minnesota, the East branch snakes its way through Humboldt, Kossuth and Emmet Counties, whereas the West Fork stays in Humboldt County, nicking a corner of Pocahontas before halving Emmet County and its county seat Estherville. It was along the West Branch I saw the bridge in the photo above: the Murray Bridge. Located two river miles southeast of Bradgate, this Pratt through truss bridge with pinned connections had a very unique feature on its portal bracing: star-shaped heel bracings welded right through. That, plus the plaque indicating its builder’s date of 1905 all belonged to a local Iowa bridge builder, A.H. Austin.  Little did I realize at that time was that although Mr. Austin may have been a local bridge builder, he left a legacy in northern Iowa that is still talked about to this day. And while three bridges were officially credited to his name in a state-wide survey conducted by the late James E. Hippen in the early 1990s, he built more than any of the historians knew about. And henceforth, we will look at his legacy and the bridges that he built up until now, plus the ones that still exist today.

Born Alva Hiram Austin in Colchester, Vermont on 7 September, 1848, he grew to manhood, having graduated at the University of Vermont. After many of his friends decided to heed to the advice of Horace Greeley, the young man of 27 years emigrated west to Webster City in 1875. After having worked for the county auditor and a local church, Alva became interested in bridge building, and in 1877, did an apprenticeship for a bridge builder in Cedar Falls, who was building bridges in Hamilton County, where Webster City is located. Shortly afterwards, he became a contractor, having established his bridge building business in Webster City at 737 Bank Street. For over 40 years, Mr. Austin built dozens of bridges in Hamilton County, as well as surrounding counties, although records have indicated him constructing bridges mainly in Humboldt and Kossuth Counties. It is possible that he built bridges in other counties but more research is needed to confirm these claims. Mr. Austin was known for his athleticism as a civil engineer, having walked 10 miles between his workplace and the bridge building site daily, and thus having known every village and field in the county and its surrounding neighbors.

Mr. Austin was also a committed civic leader, having served as a mayor of Webster City from 1898-1900 as well as the head of the school board from 1899 to 1901, having successfully spearheaded efforts in building the Webster City High School. He later worked as a city inspector, having overseen the construction of the public swimming pool to ensure the design suited the builder’s expectations.

When Alva died on 8 July, 1944 at the age of 96 years, he was survived by his three children, Roy, Jesse and Fred- all of whom had attended college at Iowa State University, yet his daughter Jesse became professor of economics at Cornell University in New York. Especially in his later years before his death, she became his caretaker. Alva’s wife, Chloe Rachel (née: Scullin) died in 1896 after having been married to Alva for 18 years. Another daughter, Grace, had preceded in death 18 years before his ultimate passing.

As far as bridges are concerned, at least 20+ bridges had been built by Austin in five counties, including Hamilton County, yet Kossuth County seemed to have been his primary customer for at least six bridges were built during his career as a bridge builder. One of them was later relocated to Emmet County. Three were reportedly built in Humboldt County, including the now extant Lewis Street Bridge in Humboldt and the aforementioned Murray Bridge near Bradgate. It is still unknown if and where Austin has built other bridges. However, here is the databank of the bridges that he had built. Information on its dimensions and other photos are available by clicking on the name of the bridge, which will take you to the bridge:

Armstrong Gravel Pit Bridge- This bridge spans the East Fork of the Des Moines River north of Armstrong in Emmet County. It can be seen from 160th Street but is privately owned. The bridge was built in 1899 by Austin, but its original location was in Kossuth County. Emmet County’s engineer bought the bridge in 1940 for relocation to the gravel pit, where it served traffic until its closure in the 1970s. The bridge then sat abandoned for three decades until a new owner restored it for private use. The markings on the portals are typical of Austin’s design which could be seen with most of the structures built.

Albright Bridge- Spanning the Boone River at Inkpaduta Avenue south of Webster City, this 1907 bridge represents the common form of the Pratt through truss bridge with A-frame portal bracings and is one of the latest examples of Austin’s work. At 156 feet, this bridge is still one of the longest of its kind in Iowa.

Second Street Bridge- Spanning the Boone River in Webster City, this two-span Pratt through truss bridge with Town lattice portal bracings with curved heel bracings was one of the first bridges built by Austin in 1878-9. It served US Hwy. 20 when it was designated in 1926. Sadly, a truck crashed into the bridge in 1949 and it was subsequentially replaced in 1950.

Blackford Bridge- Spanning the East Fork Des Moines River west of Algona, this bridge was one of the earliest structures built by Austin. It was one of the first with its star-formed heel bracings but one of the last using the Town Lattice portal bracing. The bridge was replaced in 1942 for unknown reasons except that the steel was probably reused for the war efforts.

Lewis Street Bridge- Located in Humboldt, this two-span Pratt through truss with Town Lattice portal and heel bracings used to carry this thoroughfare until the late 1960s, when it was bypassed by the Hwy. 169 bridge to the west. The bridge closed to traffic in 1970, yet attempts were made to convert it to first pedestrian then afterwards a pipeline crossing. Heeding to the demands of the county engineer to have the structure removed with haste, the bridge was removed in 1981. Today, only the center pier and the abutments can be seen.

Riverdale Bridge- Located over the East Fork Des Moines River at 150th Street, south of Algona and west of Hwy. 169, the Riverdale Bridge was a late example of a bridge built by A.H. Austin. He was awarded a contract to build the bridge in October, having completed it in 1900. The 142-foot Pratt through truss bridge with M-frame portal bracings functioned in place until its replacement in 1991.

Bancroft Bridge- Spanning the East Branch Des Moines River west of Bancroft, this Pratt through truss bridge is similar to the bridge at Armstrong in Emmet County. It was built in 1899 yet it was replaced before 1990, when the statewide Iowa historic bridge survey was carried out.

According to the surveys carried out by Hippen and Clayton Fraser, several other bridges may have been credited to Austin’s name, yet there has not been any full confirmation. Therefore, there is a plea from you. Do you know of other bridges that Austin built? If so, when was it built, where was it located and most importantly, what did it look like prior to its replacement?

All of these bridges will be added to this page on A.H. Austin in the Chronicles’ Bridge Directory. Stories are also welcomed.

Special thanks to Martin Nass of Webster City for the information on A.H. Austin and Doug Miller at the Kossuth County Highway Department for the photos and information on the bridges in the county.

Iowa City, Johnson County, and Eastern Iowa history, as seen through the eyes of postage stamps, postcards, letters, coins, books, and other collectibles.