Location: White Elster River in the village of Draschwitz, 7 kilometers north of Zeitz in the state of Saxony-Anhalt

Status: Open to traffic on a weight limit of 6 tons

During a recent bike tour along the White Elster from Gera to Leipzig (all 90 kilometers of it), I came across this unique structure. After passing through Zeitz and having revisited some of its historic bridges (see link), one would expect to see more of these historic bridges along the river, especially as Saxony-Anhalt has a wide selection of historic bridges worth visiting. One needs to see the towns of Halle (Saale), Magdeburg, Quedlinburg or even the bridges in the Saale-Unstrut River corridor in order to gather the impression that the bridges are being cared for by the state; this includes using funding provided by the European Union but also by the federal government to restore them to their original form while ensuring that cars and bikes can use the bridge. 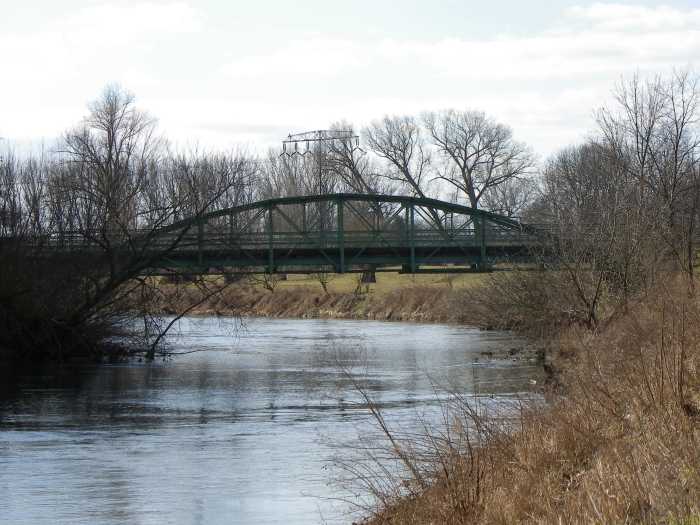 The Draschwitz Bridge is one of these structures that received this kind of care, as it was restored in 1999/2000, which included new wood decking plus paint on the superstructure, as well as work on the foundations. Given its location on a less used road that is occupied mainly by cyclists and locals driving their cars across, the restoration was worth it, as the bridge serves a local road and the White Elster bike trail, which connects Hof (Bavaria) and Halle (Saale), running parallel to the river until its confluence with the Saale River, between Halle and Leipzig. 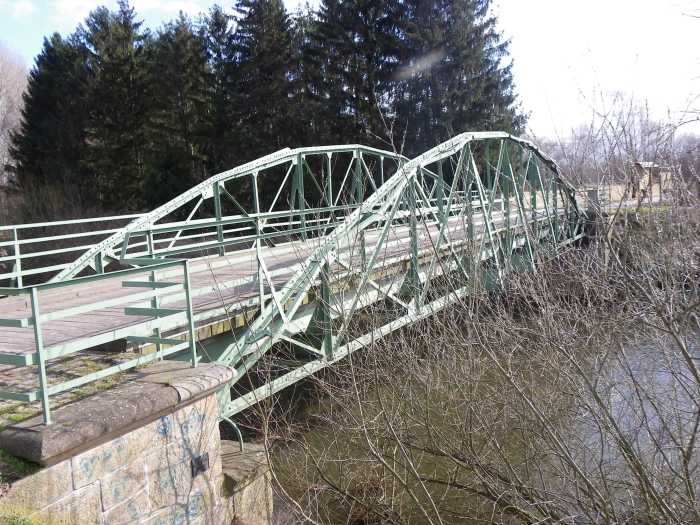 But what makes this bridge unique is its unusual truss design. The bridge was built using welded connections instead of pinned connections, as seen on truss bridges in general. Welded truss bridges, together with those with riveted connections were starting to come onto the scene at the time of its construction, as vehicular traffic- namely trains, but also later cars and trucks- had increased since the expansion of the railroad. This prompted the introduction of a network of roads connecting towns on the local level, but later expanded to cities on the regional and in the end national levels. While pinned-connected truss bridges were able to handle light traffic on local roads, as traffic increased and highway systems were introduced, they were replaced with truss bridges with riveted connections. Welded truss bridges were introduced in the 1890s to replace the pinned-connected bridges for despite its biggest asset of dismantling and reassembling the bridge at a different location, missing or broken bolts and cracked eye-bars made it difficult to impossible to relocate the bridge. With welded truss bridges, one has the advantage of relocating the bridge without having to take it apart. Plus with the beams fixed together and welded with bolts, there is more resistance to weight that is on the bridge. The Draschwitz Bridge has this on not only the trusses themselves, but also the outriggers that support the two center panels- an anomaly given the fact that truss bridges usually have outriggers on every vertical beam and panel, especially those in the US built after 1900. 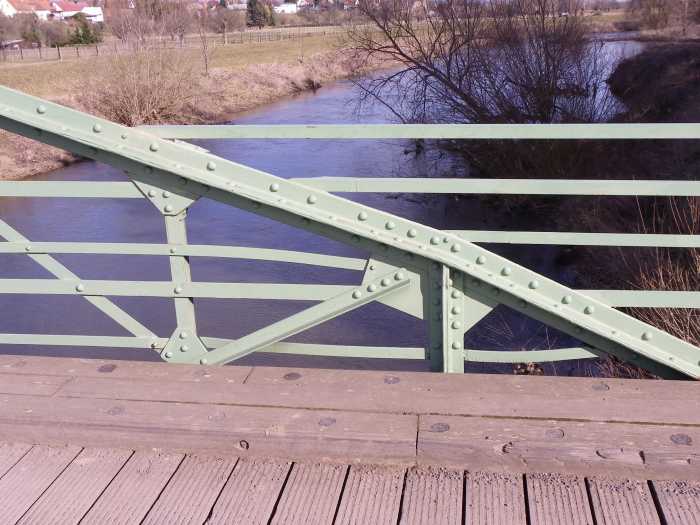 Another unusual feature is the upper chord itself. Normal truss bridges have upper chords that are of either squared shaped beams, V or X-laced or those whose shape resembles the letters I, L and C. They are supported by vertical and diagonal beams that are up to half its size and width. For this bridge, the upper chord and the vertical and diagonal beams are of nearly the same size. However, even more unique is the angled bracings that weave along the top chord, the points sticking outwards by up to 10 centimeters. While some truss bridges in the US and Germany built prior to 1885 may have had features like this bridge, the Draschwitz Bridge is the only known bridge to have an upper chord, decorated with such unusual bracing. 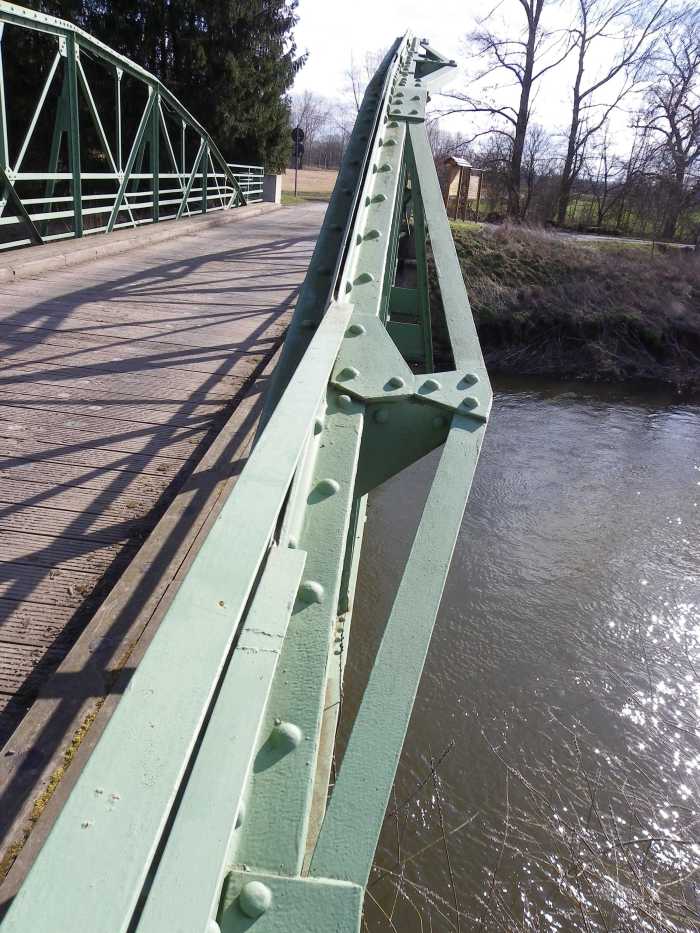 Apart from the renovations, nothing has altered the bridge, even when villagers installed a plaque on the western wingwall, indicating the high water mark set by the flooding in 1954. Chances are, the White Elster may have been rechanneled after that, raising the bridge to prevent it from being swept down stream. Yet, a curved beam connecting that wingwall and the pier raised some eye brows as we don’t know what this serves, except to support the bridge in one way or another. 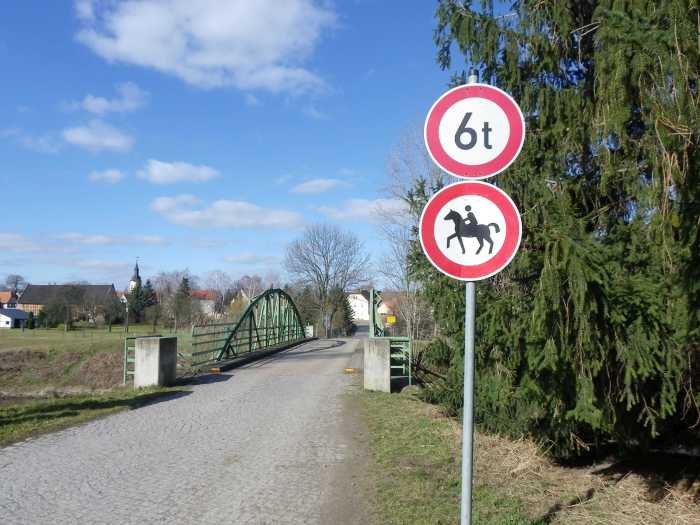 The Draschwitz Bridge is really a gem in the field when it comes to finding historic bridges. The structure continues to serve local traffic and the Elster bike trail to this day. It’s one of the landmarks one should see when passing through Zeitz and the Elsterau, also the last one to see as one bikes north toward Leipzig, but one that the quiet village of Draschwitz should take pride in, one that Saxony-Anhalt has taken great care of, just like the state’s other historic bridges, and one that historians, pontists, engineers should study further to find out more on its history and structural features. It’s the one bridge that a person can spend lots of hours with the camera and a picnic blanket, sitting and indulging at its beauty, surrounded by a historic and natural landscape.