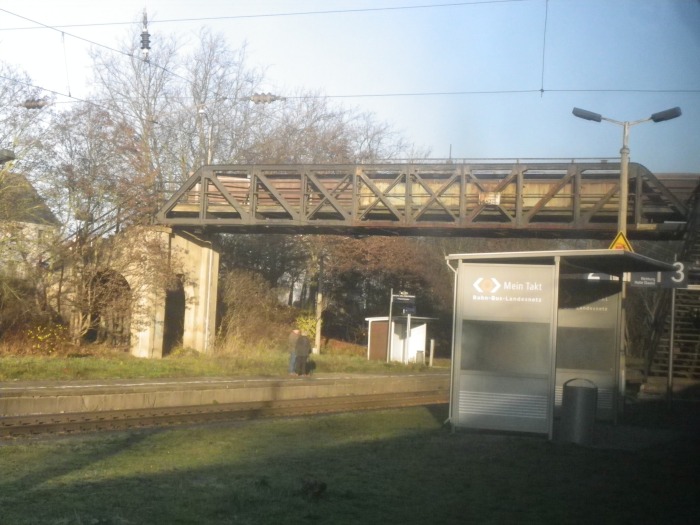 In connection with the series on Saxony-Anhalt through sister column, The Flensburg Files, we have another mystery bridge to solve. This one is between Grosskorbetha (where the railroad overpass is located) and the city of Halle, in the town of Schkopau. Located along the Saale River north of Merseburg, the town has 10,900 inhabitants, located along the Saale River, and has a castle dating back to 1177. It is sandwiched between the natural wildlife refuge of the Saale and Elster Rivers to the north and the chemical district of Leuna to the south, both of which are easily accessible by rail line and light rail between Halle and Leipzig via Bad Durremberg.  Before the viaduct north of town was completed in 2014 to accomodate ICE-trains between Erfurt and Leipzig/Halle, there were only two rather unknown bridges in Schkopau: the railroad bridge and this overpass.

The overpass spans the rail line which connects Halle and Naumburg via Merseburg and Grosskorbetha and features a 10-panel pony truss bridge with riveted connections and a curved connection between the end post and the top chord. Judging by its appearance, with little rust as it has, the bridge appears to originate from the East German period, having been built after the close of World War II by the Soviets. What is interesting is the fact that the approachs feature inclined concrete arches that appear older than the truss span. Furthermore, even though the span accommodates pedestrians, it only crosses one set of tracks and not both. It only provides access from the west side of the track to the platform which separates the two tracks. According to Googlemap, the rail line splits the town into two. This leads to speculation that there once was a bridge or two bridges that crossed the entire track, but one of them was removed.

If that is the case, then when, and what did the bridge look like before it happened? Any information on the bridge’s history would be useful. You know what to do there, right?

Test yourself on your knowledge of Saxony-Anhalt by clicking here to try out the Guessing Quiz. Answers will come very soon. 🙂

One thought on “Mystery Bridge Nr. 68: The Pedestrian Bridge at Schkopau”