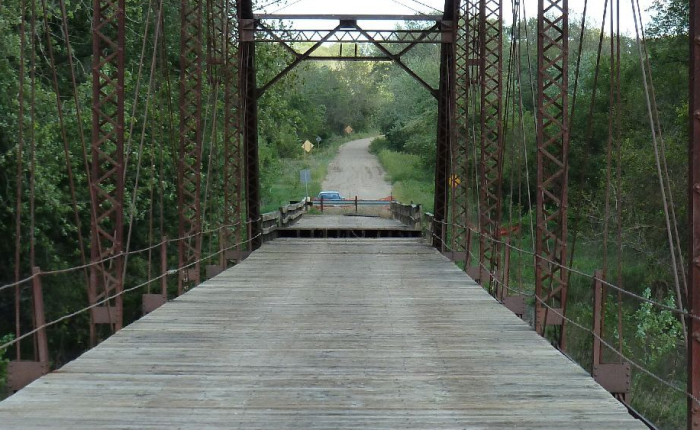 BOONE, IOWA- Mother nature has finally taken its toll on a popular historic bridge in Boone.

The Wagon Wheel Bridge, spanning the Des Moines River at 200th Street, a product of the Iowa Bridge Company, was struck by ice on 22 February causing severe damage to the two middle Pratt through truss spans. The ice struck the pier connecting the two trusses, causing it to shift at a 60° angle and the third truss (from west to east) to slip off the pier. A couple pictures by Chris Johnson shows the extent of the damage: 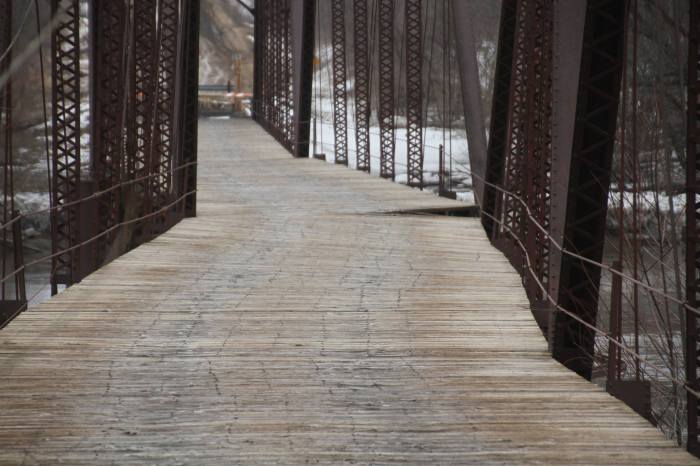 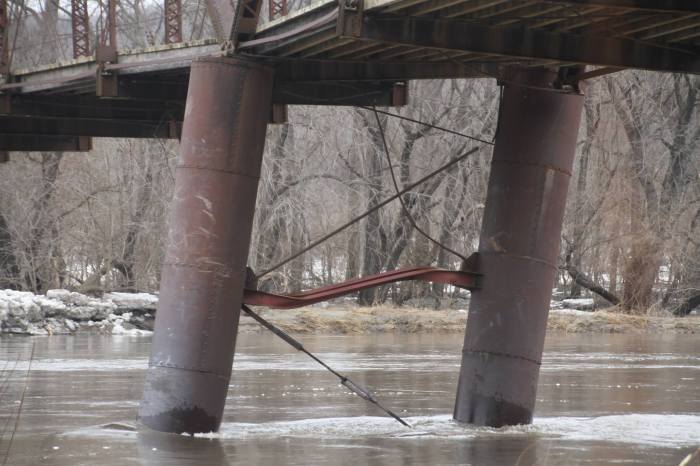 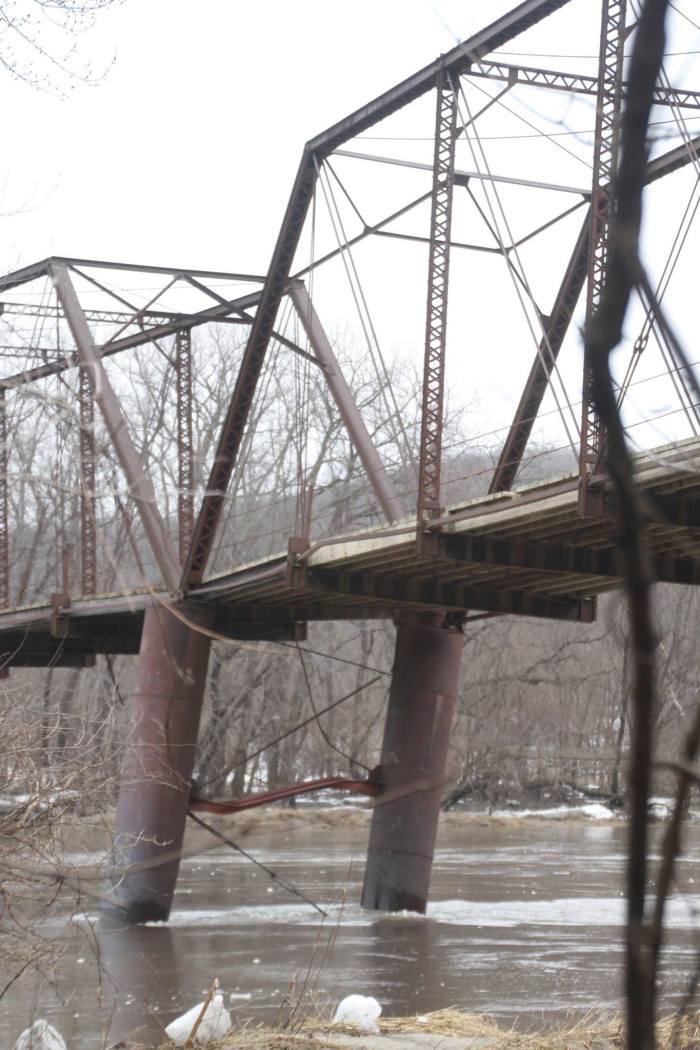 More pictures of the damage can be viewed here.

Fearing the potential of collapse, the Boone County Engineer has barricaded the bridge within a parameter of up to a mile from the structure to ensure no one goes near it. At the same time, he announced that the bridge will be removed at the earliest possible convenience, with a target of it being pulled out within 12 months.

This latest disaster tops a list of disasters that has happened to the Wagon Wheel Bridge in over 10 years time. Sections of the eastern approach spans were misaligned during the Great Flood of 2008, which prompted its closure to all vehicular traffic.

While that section was restored and the bridge was reopened to pedestrians and cyclists in 2011, arsonists struck the bridge during August of 2015, setting fire to the eastern approach spans. They were sub-sequentially removed afterwards. The shifted piers had been there prior to the flooding, as floodwaters slightly shifted it in 2011. Still the bridge was reopened in time for the 2013 Historic Bridge Weekend in August.

Negligence on the part of the county and the citizens also contributed to its demise, as a referendum was voted down in 2010 to replace the bridge but keep the structure in place. In addition, a planned memorial on the bridge, honoring a teenager who was kidnapped and murdered near the bridge was met with protest as to how it should be commemorated with proposals to use the bridge as an observation deck being balked by those preferring the bridge to be restored and retain its function.

This disaster represents an example of how negligence combined with politics have led to it being condemned. With the bridge being an impediment to the raging waters of the Des Moines River, it was a matter of time before something like this was going to happen.

Inaction does produce its consequences in the end, and many opportunities to restore the bridge came and went without much interest in the structure and its role in Boone County’s history. If there is any chance of saving the bridge, it would most likely have to be like with the Horn’s Ferry Bridge, located downstream in Marion County: keep the outermost spans as observation decks with a plaque describing the bridge’s history. Rebuilding the bridge and elevating it to accommodate floodwaters, including new piers are possible, but at nearly 800 feet, the costs maybe more than the county’s budget, unless the county receives help from contributing factors outside. Then there is the option of relocating the spans for reuse elsewhere in the county. That has been done with the Bird Creek Bridge along US 66 in Oklahoma, but in this case, many actors would be needed here.

No matter what options are available, the consensus is clear: something will need to be done with the Wagon Wheel Bridge before it collapses into the river. It may not happen now, but without a short- and long-term solution, it will happen eventually, which will be lights out on a piece of Boone County’s history.

Whether or not Kate Shelley crossed this bridge in her lifetime, I don’t know if she would be happy to see her heritage go like that. In her shoes, definitely not. What about you?

Pictures of the Wagon Wheel Bridge before its latest disaster can be found here. This includes those taken during the Historic Bridge Weekend in 2013. Should you have any ideas to present to the county engineer, please contact Scott Kruse, using the contact details here. 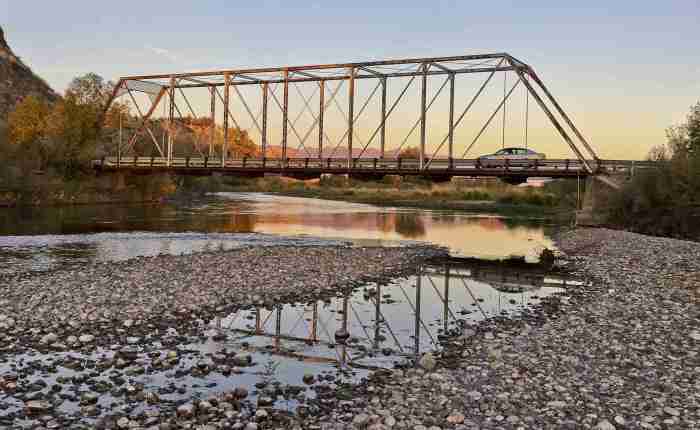 JENA, GERMANY-  Earth calling Amy Squitieri! Ms. Squitieri, there is a customer out in Montana, specifically in Gallatin County, who has been profiling historic bridges in the county. The majority of them cannot bear today’s loads anymore but have historic character to it that many people don’t want to see scrapped. This includes the Nixon Bridge. Can you help?

After all, with multiple years of experience, you deserve the Lifetime Achievement Award, so your help is needed. 🙂 And as a bonus, the man named Troy Carter won Best Photo for the Nixon Bridge! 😀

Before getting to the rest of the results, the Chronicles would like to thank everyone for taking part in the voting. Thanks to Poll Daddy, people had no problems with the voting process, with the exception of the website being down once a day for five minutes, as that was the only complaint. Because of the high turnout, the plan is to keep the format as is for the 2016 Awards, which will run its original form with voting in December and the results to be presented in January 2017.

But going back to the results, Squitieri is the second person from Mead and Hunt in three years to win the Lifetime Achievement Award, Robert Frame III won it in 2014. And like Frame, she received 45.8% of the votes, far outpacing the second place winners from Ames, Iowa- consisting of Randy Faber, Judy McDonald, Hank Zalatel and Matt Donovan from the Iowa Department of Transportation- who received 22.4%. Julie Bowers from Workin Bridges recieved 14% of the votes, outgunning Nathan Holth by four percentage points.

And the rest of the results for LIFETIME ACHIEVEMENT:

As mentioned at the beginning, Galatin County, Montana won in two categories, which include the category of best photo. Even more so, Troy Carter obtained not only the gold medal, but also the silver for the picture above, of the Williams Bridge. Bronze medalist goes to Roger Deschner for his photo of the Savana-Sabula Bridge over the Mississippi River.  And the rest of the votes:

Due to a lack of entries for individual bridges, that and the city guide tours were merged for this year’s awards. However, the two subcategories will be presented again for the 2016 awards. As always, the votes were broken down to US, International and All around. The top three in the US category happened to be the winners all around, while the bridges in Newcastle (UK) and Paris (France) shared top honors in the International Division. Furthermore, he second and third place winners came from New Jersey, while three out of the top five finishers originated from New Jersey.  Here are the results:

For the second time since its inception, the Historic Bridge Park near Kalmazoo, Michigan has won an award by the Chronicles. In 2011, the Park won the Award for Best Kept Secret, while simultaneously, its engineer behind the creation of the park, Vern Mesler, won the Lifetime Achievement Award. As attractive as the park is and as big of a posterboy as this place has served, it is justified that the award is given, especially as 36.4% of the voters gave the people there the nod. 🙂 As for the other results….

The competition was fierce, especially in the international division, but the unusual covered bridge in New Hampshire received 25% of the vote, and therefore took the USA and All Around divisions. Only 7% behind was the Waddell truss bridge in Clearwater County, Minnesota with 18.8%, and the Howe Truss Bridges in Blue Earth County won third place with 3.1%. In the International Category, the Estate Bridge in Staffordshire in the UK won the competition, and third place in the All Around. In second place, we have a tie between The Bridge of Lions in Berlin and the Natural Bridge at Mallorca Island in Spain. Third place goes to Havenga Bridge in South Africa and the Moritzburg Pavillion Bridge in Zeitz, Germany.  Here are the complete results: 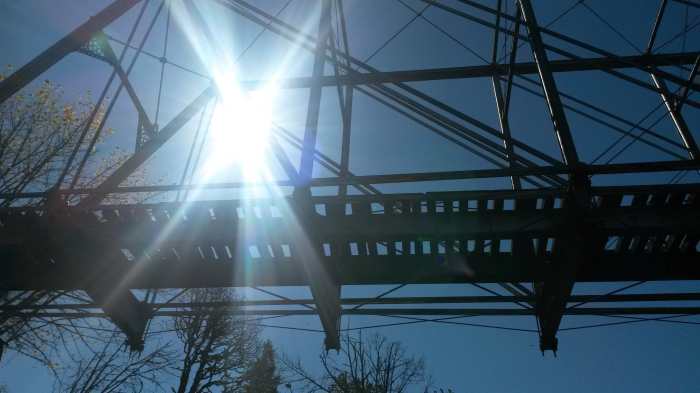 BRIDGE OF THE YEAR:

And lastly, the 2015 Bridge of the Year. While the Cliffton Suspension Bridge ran away with the competition in the 2014 Awards, the competition was fierce among the candidates, as there were several ties before the Hayden Bridge in Oregon came away a winner with 27% of the votes. Second place finisher is the Edmund Pettis Bridge in Alabama, which was the site of the demonstrations in 1964. The 50th anniversary celebrations took place at this steel through arch bridge. It received 18.1% of the votes. The Savana-Sabula Bridge finished in third with 12.1%.  And as for the rest:

And with that, we have closed shop for the belated 2015 Ammann Awards by the Bridgehunter’s Chronicles. For the delay because of the terrorist attacks in Paris, the author apologizes. For that, plus in light of the 5-year anniversary of the Ammann Awards, the Bridgehunter’s Chronicles will be accepting nominations for the 2016 Ammann Awards between now and 1 December, 2016. If you have any candidates in any of the categories, please use the contact form and send them in this direction.

In addition, the Chronicles will have its own version of the Hall of Fame, where the top two candidates of each category of each year (from 2011 to 2016) will be voted upon, and the top three in each category will be inducted into the Hall of Fame. More information will come during the course of the year. It is clear that two different and sequential voting processes will commence during December 2016 and January 2017.

In the meantime, get your cameras and candidates out there, you have more than enough time between now and December 1st, 2016 to win your fame and fortune with your bridge and pontist. 🙂