Author’s Note: This is a throwback article written in November 2013. New features in the updated version includes more photos on this page, as well as Google Map, pinpointing the exact location of the bridges profiled here. A link can be found at the end of this tour guide article.

Halle (Saale)- the birthplace of George Friedrich Handel. The second largest city in the German state of Saxony-Anhalt and representing the second half of the metropolis Leipzig-Halle, which has 100,000 of the metro’s 600,000 inhabitants as well as one of the most renowned universities in Germany. Yet when you get off the train in Halle, you may be turned off by the ugly high-rise buildings that date back to the days of the German Democratic Republic, a communist state that existed until the fall of the Berlin Wall in 1989 and German Reunification in 1990. Yet when you walk further towards the City Center, you will see another face of Halle that will sweep you off your feet: architecture dating to the Baroque Period, a statue of Handel overlooking the Cathedral and the Town Square, and further towards the Saale River, there’s the Giebichenstein Castle and the Halle Zoo, one of the largest zoos in the eastern half of Germany (Neuenbundesländer).

Surprisingly, if you are a pontist, you will be surprised to find that Halle has a wide selection of historic bridges that exist along the Saale River, its tributaries and to the south, the White Elster River, which meanders through Leipzig enroute to the Vogtland region in Thuringia and Saxony. There are 131 bridges in and around Halle; 14 of which are declared historically significant and protected by state preservation laws.  It is very rare to find historic bridges of at least four different types, or until recently have more than one cantilever truss spans, dating back to the 1880s. And in terms of German history, many of these bridges survived the test of time, including World War II, in contrast to the majority of cities and regions, whose bridges were severely damaged or destroyed through air raids and attempts by the Nazis to fend off advancing Allied troops. This plus the history that is still being sought on these bridges is what makes the bridges of the City of Salt unique.

This article will take you on a tour of the bridges that you should see, when spending a day in Halle. This includes a pair of bridges that no longer exist but are still part of the memories of the Hallenser people that still live there as well as those who were born there but have long since moved away for better possibilities. So without further ado, here is a small guide of the Bridges of Halle, keeping in mind that there are links available that will bring you to the photos and info on the bridge: 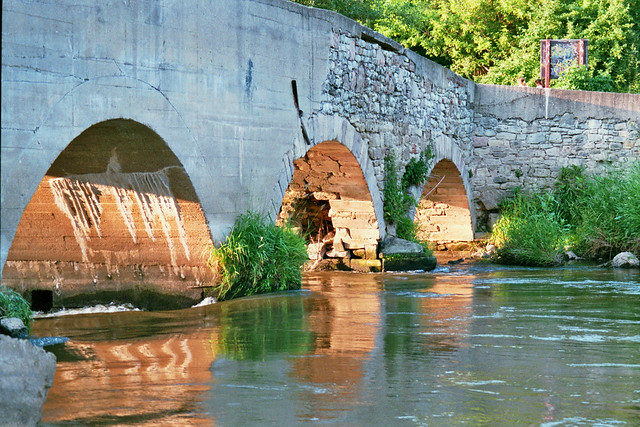 This bridge, built in 1733, is the last crossing along the White Elster before it empties into the Saale River in the Hallense suburb of Böllberg. It used to serve a main trading route between Merseberg and Magdeburg before it lost its importance because of the railroads. Today, the stone and concrete arch bridge serves the White Elster bike trail between Halle and Leipzig. Yet the bridge has seen its better days as the arches have deteriorated to a point where reconstruction is badly needed in order to avoid the structure to collapse. 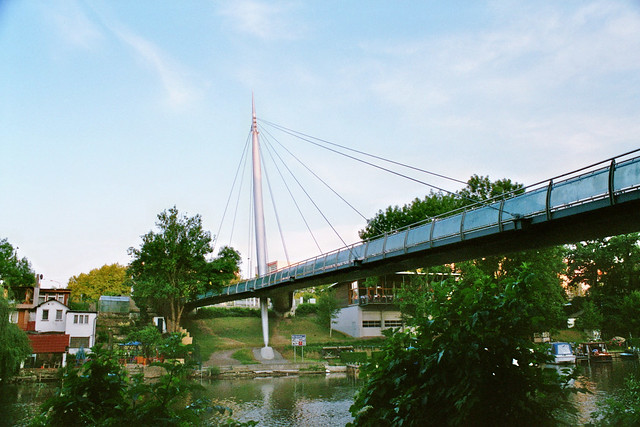 This is the second youngest bridge in the city and the youngest to span the Saale. This bridge spans the Saale’s main river at the entrance to Rabeninsel (Raven’s Island) and features a cable-stayed bridge, whose pylon angles towards Böllberg Weg and the cables support the roadway. The roadway resembles a raindrop as it encircles the pylon. Built in 2000, the bridge measures 85 meters long and is 20 meters tall, easily seen from the main highway a kilometer away. 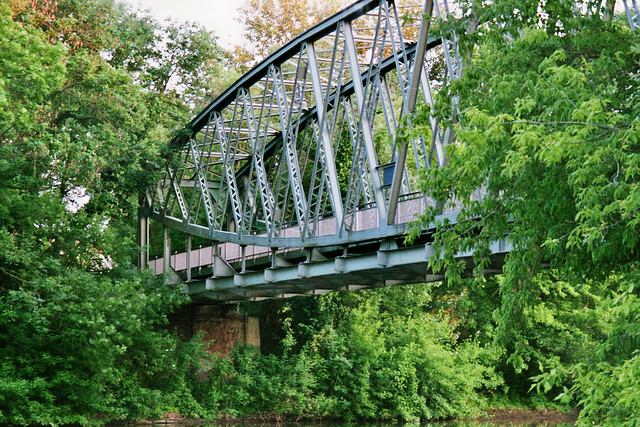 A few months ago, the Chronicles did a segment on this mystery bridge, spanning the Saale River at the confluence of the Elisabeth Saale and Middle Saale Rivers, west of Böllberg Weg. This bridge was built in 1884 and used to serve a rail line connecting the city with Magdeburg (north) and Merseburg (south) for over 80 years. When the line was abandoned in the 1970s, the lenticular through truss span, measured at 40 meters in length, was rehabilitated and converted into a bike and pedestrian crossing, which still serves its function today. The bridge also has a dark side- and a memorial plaque is placed on the truss as a marker of this tragedy. In the night of 13-14 March, 1919, Karl Meseberg, who was a revolutionary leader during World War I, was murdered on the bridge with his body landing in the Saale. It was found five days later. While the bridge shows its bright side during the day, at dusk, one can feel the presence of a ghost at the bridge, keeping people away from the crossing. This may be in connection with this unfortunate event, but more info in the form of eyewitnesses and evidence is needed to confirm the claims of a ghost at the bridge.  If you look to the south of the bridge, you will find a blue tied-arch bridge about 100 meters away. That bridge was built in 2000 and carry water lines connecting the southern and western parts of the city. 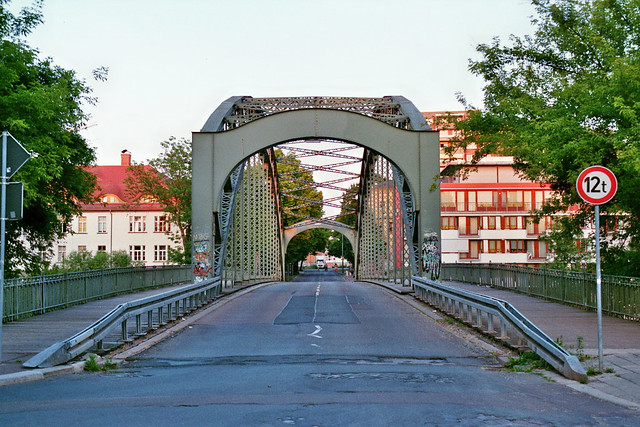 This steel through arch bridge is located over the Saale River at William Jost Strasse north of the Hafenbahnbrücke. Built in 1912, the grey-colored span is similar to the Hollernzollern Bridge in Cologne in terms of the design of the bridge, but the portal bracing resemble a bridge located west of Steinbrücke in neighboring Magdeburg. But when passing underneath the bridge, one will see the stone arched approach spans carrying the emblem of Halle on there- an impressive construction by the builder of the bridge, whoever it was. 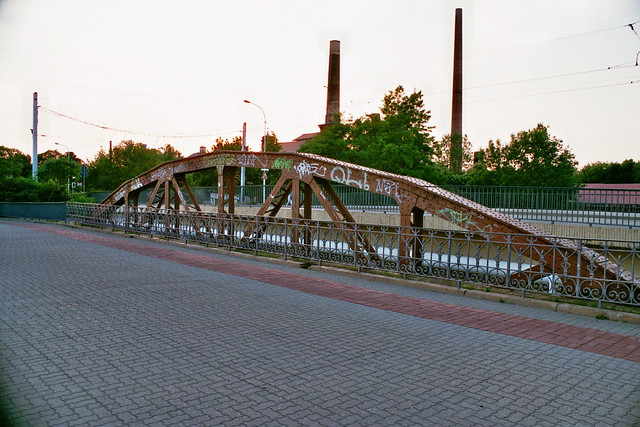 Spanning the Saale River at the Mansfelder Strasse, there are three crossings located within 60 meters of each other. The oldest span is a polygonal Warren pony truss with riveted connections that used to serve streetcar and vehicular traffic. Yet because of its structural obliqueness- too narrow and too light to support traffic- a vehicular crossing to the north was built in the early 1990s, which was followed by a separate streetcar crossing to the south a decade later. The truss span was later converted to pedestrian use by strenthening the trusses and adding a concrete and brick deck. An economic and interesting way to preserve a piece of history.

Apart from the Hafenbahn, Giebichenstein, and Mühlentor Bridges, the Peissnitz Bridge is one of the crown jewels as far as Halle’s bridges are concerned. Spanning the Saale River at Peissnitz Island, carrying the street carrying the same name, the bridge is one of the most ornamental of bridges, for the 1898 structure features a cantilever Pratt truss design, with ornamental towers supporting street lights, and red quarry stone arch approach spans, presenting its grey and red colors which are typical colors of the city. When built in 1898, the bridge was the only toll bridge in the city, as money was collected for people wanting to cross the bridge and enter Peissnitz Island. This was discontinued in 1921 and the bridge has operated as a free bridge ever since. The bridge is 103 meters long, 70 meters of which represent the main span. Despite sustaining damage during World War II, it was rebuilt in 1946 and was eventually converted to a pedestrian and bike crossing, which remains that way to this day.  The Peissnitz Bridge is the only way in and out of the island which houses a vehicle museum complex and the island mini-train. Another bridge spanning the Wild Saale west of the bridge at Weinberg, known as the Elisabeth Bridge, a suspension bridge built in 1913, has been closed to traffic since 2011 and plans are in the making to tear it down and replace it. 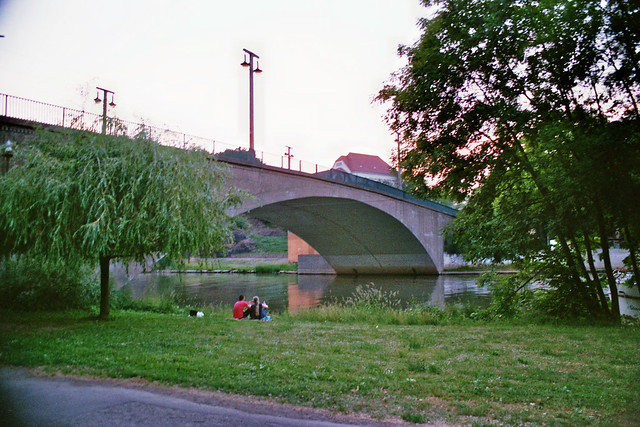 This bridge and neighboring Giebichenstein Castle on the lime cliffs of the Saale River go together like bread and butter. The three-span concrete arch bridge is the fourth crossing at this site, being built in 1928 replacing a steel Parker through truss bridge, whose predecessors included a pontoon bridge, ferry and a covered bridge. The bridge is 261 meters long, 60 of which consist of the largest arch span. The bridge features two sculptures on the south side facing neighboring Peissnitz Bridge, resembling cattle- making the bridge a real treat to see. The bridge was renovated in 1995 and again in 2011, but continues to serve vehicular and street car traffic connecting the city center with the western suburb of Krollwitz.

Like the Peissnitz Bridge, the Mühlentor Bridge, spanning Mühlgraben-a tributary of the Saale- at Neuwerk in the northern end of the city, is the most ornamental bridge but in the form of an arch bridge. Art Deco art on the bridge’s railing and four lamp posts can be seen when crossing the 1912 span by car or bike. The railings resemble a Howe truss made of concrete, a rarity one can see these days.

When leaving Halle (Saale) by train heading north, this bridge will be the last landmark to be seen on your way out. Today’s bridge, built in 2005, features a cable-stayed span that is 71 meters tall and 171 meters long, spanning the railroad tracks. Yet the bridge came at the cost of a steel eyebar suspension bridge with pony truss decking, which was built during the first World War, with the help of French soldiers. It was originally named the Hindenburg Bridge before it was changed after World War II. Despite being considered a historic landmark, excessive rust and corrosion, caused by diesel-powered trains passing underneath it, doomed the bridge, causing the city council to decide for a replacement span. The cable-stayed bridge was built to the north of the bridge and after its completion in 2005, the 1916 bridge was dismantled and sold for scrap, despite protests by many who wanted to keep the structure for reuse as a pedestrian bridge.

While some local newspapers have mentioned a bit about Halle’s bridges, more publicity is needed to bring the bridges to light and find out more about their history. While a couple bridges have been documented, others still have mysteries that have yet to be solved. And even more so, perhaps someday when someone writes a book about the bridges in this community, this information will be useful.

A Map with the locations of all the bridges can be found via link here:

Halle (Saale) is famous for many markets and events honoring Handel and other music greats. This includes the Christmas market, which you can click here to read about. Courtesy of sister column The Flensburg Files.