Mead Avenue Bridge in Meadville, Pennsylvania. One of the most unique bridges in the US and perhaps even beyond. Spanning French Creek, the two-span through truss bridge featured an 1871 worught iron Whipple span encased with a 1912 Baltimore span.  When I visited the bridge during the 2010 Historic Bridge Weekend, the blue-colored span was closed to traffic with a bleak future in its midst. The majority of the city’s population wanted the bridge gone. But efforts were being undertaken to try and preserve at least half the span. This bridge was the first one profiled in the very first aricle I wrote for the Bridgehunter’s Chronicles blog, when it was launched in October of that same year. Click here for the article.

Fast forward to the present and the situation has changed completely. The bridge is being profiled again as the first article produced by the Chronicles as a website, yet the bridge is no more. 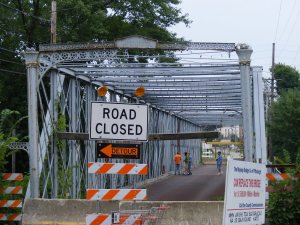 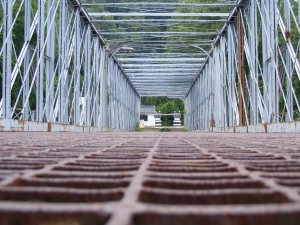 Most of the historic bridges like this one would be cut up into pieces and hauled away to be recycled. In Pennsylvania it is no exception for many of them are being replaced through the rapid replacement program initiated by PennDOT and many bridge builders in the private sector last year. Yet a last-minute attempt by one pontist has paid off. The bridge is being distmantled, the parts will be hauled, BUT it will be relocated. The question is how?

The Chronicles had a chance to talk about the plan to restore the bridge with Art Suckewer, the pontist who is spearheading the efforts and pulled off the last minute trick to saving the artefact from becoming a thing of the past. What he is going to do with the bridge and the challenges that he and his crew are facing at the moment you can find in the interview by clicking here, which will direct you to the Chronicles’ website.