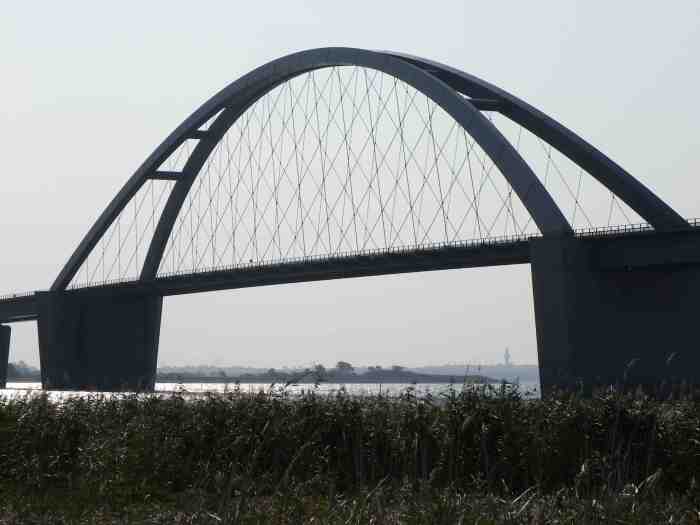 FEHMARN ISLAND, GERMANY-  Connecting Fehmarn Island with mainland Germany in the German state of Schleswig-Holstein, the Fehmarn Bridge is unique in three different ways: its historic value, its touristic value to the region and lastly, its infrastructural value.

The bridge was built in 1963, using the very first bridge design conceptualized by an engineering firm in Oberhausen, in North Rhine-Westphalia: the basket-weave tied arch bridge. The arch design features two arches that meet at the center of the span above the roadway, with a network of diagonal beams supporting the arches. The concept of connecting Fehmarn Island with the rest of Germany was introduced in 1912, yet the plan was first realized when the Organization Todt began construction on a combination roadway/railway crossing in 1941, shortly after the Nazis had occupied Denmark thus enlarging its empire. The cost for the investment was 8 million Reichsmarks. The project was halted in 1942 and would not be continued until 1960, when the construction firm of C.H. Jucho, Felten & Guilleaume und Flender, restarted the project with G. Fischer, T. Jahnke und P. Stein of the company Gutehoffnungshütte Sterkrade AG of  Oberhausen-Sterkrade designing the blueprint of the bridge, and Gerd Hofmann masterminding the architectural aspect. It took three years to complete the project. Originally scheduled to open on 30 April, 1963, it had to be open to restricted traffic in January for ferry service was suspended due to a harsh winter. Crossing the bridge required a special permit for construction was not yet completed. This was lifted when the bridge opened to traffic at the end of April. The bridge has a double function of being a highway bridge and a railway bridge all in one, both serving the purpose of connecting Hamburg and Copenhagen.  The total length of the bridge is 1400 meters. 900 meters consisted of the bridge itself with the basket-handle tied arch span having a length of 350 meters. The rest of the length consists of approach spans, including an arch span over a road connecting Avendorf with Strukkamp.

Since its inception, many engineers have looked to the Fehmarn Bridge as reference, giving them some ideas on how to construct similar spans. Already planned are the new Bettendorf spans over the Mississippi River at the Quad Cities (replacing the twin suspension spans) as well as the Levansau Bridge over the Baltic-North Sea Canal near Kiel, using the basket-handle spans similar to the one at Fehmarn. The Fehmarn Bridge is one of the main attractions for tourists and one can see the bridge on any souvenir item available. Even the streets of Burg and its boroughs have houses decorated with the lighted Fehmarn Bridge emblem.  And most recently, the Bridgehunter’s Chronicles introduced the bridge as part of its new logo, a measure well-received by residents of Fehmarn Island as well as in the bridge and preservation communities.

Despite this, the future of the 51-year old bridge is up in the air. Plans are in the making to widen the roadway and upgrade it to motorway status. This is part of the plan to create an industrial area on the island, the proposal that has been met with opposition from residents and people associated with the island alike. According to Karin Neumann, spokesperson for the initiative “Bewahrt Fehmarn” (English: Preserve Fehmarn), the industrial group Baltic FS, a German-based group, wants to create an industrial Areal where warehouses, a industrial storage facility and factories would be created on 15 hectares of land on the island. In addition, the motorway will feature a new tunnel connecting Fehmarn with Denmark, thus eliminating the need for ferry service between Rodby (Denmark) and Puttgarden. And finally, the German Railways (Die Bahn), with support from the German Ministry of Transportation in Berlin is working together to construct a replacement for the Fehmarn Bridge. Proposals include:

The options were presented in August with meetings taking place in Berlin and Oldenburg (the administrative district where Fehmarn Island belong to) in September. Despite claims by die Bahn that no one would want the bridge after it is replaced, thus justifying the need to demolish the bridge, the proposal to tear down the Fehmarn Bridge was met with a protest similar to Hurricane Katrin slamming New Orleans in 2005. Local authorities and people associated with the bridge objected to the demolition proposals forcefully, claiming that Die Bahn was short-sighted and as inconsiderate as a bully in kindergarten.  Apart from wanting to keep the bridge as a tourist attraction and key bicycle and pedestrian crossing between Fehmarn and Grossenbrode, the bridge is protected by the state preservation laws of Schleswig-Holstein as it is considered a technical historic landmark. In addition, an agreement between the states of Germany and Denmark signed at the time of the bridge’s construction stated that the connection between mainland Germany and Denmark via Fehmarn Island is to remain two lanes for automobile traffic and one track for railroad traffic. According to Neumann and other sources, the agreement would need to be replaced should both Germany and Denmark want a motorway connection. But most importantly, as Neumann stated in an interview with the Chronicles, having three bridges as well as the Areal would degrade the natural and tourist value of the island, which according to latest figures, 2.5 million tourists from Germany, Denmark and elsewhere take their vacation on the island annually, and even though the total population of the inhabitants is roughly 30,000 year round, at least triple the number are on the island in the summer time, mostly for the purpose of camping, biking, swimming and visiting the villages and historic places that have existed for over 400 years.

Given the lack of experience of Baltic FS with its plan of constructing the Areal combined with the hastiness of  Die Bahn and the German and Danish governments, the idea of the Areal, combined with the idea of additional bridges at the site of the Fehmarn Bridge has been seen in the eyes of the preservation group and the locals as poorly timed, poorly thought out and most importantly, poorly communicated between the planners and the residents, most of whom are against any proposal dealing with the Areal project as well as the replacement of the Fehmarn Bridge unless there is a tunnel variant and the historic bridge is saved. This according to sources from Bewahrt Fehmarn and other locals with knowledge of the project.

The current situation is as follows: A petition drive started this summer to halt plans for the Areal project as well as the replacement of the Fehmarn Bridge. With as many as 1800 signatures, the district of Oldenburg and the state of Schleswig-Holstein have approved a referendum, scheduled for 8 March of next year, where people will have an opportunity to vote on the Areal project. Politicians in Berlin and Kiel are working together on a solution where a tunnel would be built instead of two additional bridges and the Fehmarn Bridge would be handed over to the state or Oldenburg district, which governs Fehmarn.  Given the support for their beloved island, a vast majority of the people will most likely vote against the Areal, citing the need to preserve the island as  a place of natural interest and the fact that tourism has been the locomotive of the island’s economy. Even the majority of local businesses are against the Areal project as well, for only two have favored the district, according to Neumann. In addition, although the trend is leaning toward the tunnel solution, chances are very likely that the Fehmarn Bridge will remain in service, even beyond 2020, as many politicians are claiming that its lifespan will end.

But even if residents on Fehmarn have it their way, it will not stop the project of constructing a tunnel between Puttgarden and Rodby from getting underway at the earliest, next year, replacing the ferry service. This has put pressure on the parties involved regarding how to find a solution to the problem with the Fehmarn Bridge. Yet chances are likely that if all is approved in favor of the locals, then the Fehmarn Bridge will have new life as a local and bike crossing, with the tunnel variant taking over main traffic. That would be a blessing for many who cherish their beloved structure, whose history dates far back, and whose design is the pioneer of the bridge type that is still being used to this day.

Check out the photos of the Fehmarn Bridge on the Chronicles’ facebook page, which you can find here.

If you want to know more about how you can help save the Fehmarn Bridge and stop the Areal Project, check out the Bewahrt Fehmarn page, which you can click on here for more details. Special thanks to Karin Neumann for providing some useful information for this write-up.

2 thoughts on “Fehmarn Bridge in Germany: At the Crossroads between Preservation and Progress”