Located along the Missouri River west of St. Joseph, Doniphan County, Kansas has a rather unique set of historic bridges. Unlike the standard designs that were used during the renaissance of bridge construction between 1880 and 1930, many of the bridges found in this county were built using unusual designs that were considered absurd in the eyes of bridge engineers and politicians alike, but considered a work of art in the eyes of historians and preservationists today. Also unique are the fact that these bridges were recycled and reused in locations that are still sparesly used today. It does not necessairily mean that they were relocated per se. Some of these bridges were rebuilt, using steel parts taken from other  bridges that were dismantled and scrapped. Reason for this is due to a lack of financing for hiring contractors to build bridges, using steel from mills from the east, the county commissioners during that time found creative ways of reusing the steel parts to construct “new” used bridges. While they have not been considered eligible for the National Register just yet, due to a lack of information on their history, they will surely be considered in the coming years, when local authorities and the Kansas State Historical Society will relook at these bridges and determine which ones are historically significant.

Six bridges are being profiled in this tour guide article. Five of them are located within 10 miles’ distance of US Hwy. 36, which slices through the county.  One of them is a railroad bridge over the Missouri River at St. Joseph. The sixth bridge is located 20 miles south of St. Joseph along the tributary of the Missouri, just west of its confluence with the second longest river in the US. Only one of the six bridges profiled here has been replaced. While there are four other pre-1920 steel truss bridges and a half dozen wooden stringer bridges still in use in the county, these six are the créme dela créme because of their unique design and their construction, using recycled steel parts. We’ll start off with the first bridge:

Comments:  The Blair Bridge is perhaps the smallest of any Parker through truss bridges built in the history of bridge building in the US, with the main span of only 86 feet (the total length is 91 feet) and only four panels. Normally one would find four panels on a pony truss bridge. Yet looking at the pinned connections, the portal and strut bracings  as well as the V-laced bracing on the bridge’s top chord, it appears that the bridge was assembled using parts from a bridge dismantled before the date of construction. It is clear that the date of construction is not accurate. It is possible that either the bridge was relocated to this place or it was put together on sight using parts from a pre-1900 structure(s). Evidence is pointing to the latter because of its unusual appearance, which would have violated the standardized truss codes put in place by the state when they introduced 7+ panel Parker trusses with riveted connections in ca. 1915. Whoever was the genius behind this bridge has yet to be discovered through research. In either case, the bridge still retains its original form today and is open to traffic.

Date of construction: Before 1900

Status: Still in use on a minimum maintenance road

Comments:  At a total length of only 75 feet, the Bendena Bridge is one of the shortest Pratt through trusses built in the history of bridge building. While the bridge has a total of five panels (typical of a 100-foot through truss span), the middle panel is only a third of the length of the other four panels. This leads to the question of whether this bridge was rebuilt using parts from another bridge or if it was relocated here but the panel was shortened in length to accomodate the crossing over a small creek. It is clear that the bridge originated from a period up to 1910 for pinned connections were popular during that time.

Comments:  The Doniphan Bridge represents an example of an earlier use of welded and riveted connections. It is considered a Waddell truss because of the subdivided connections which are not found in a kingpost pony truss design. Yet how it was resembled is unusual because of the use of steel I and H-beams that were bolted and welded together. It is possible that this bridge was assembled using steel parts from a building or a bridge. Given the excessive use of steel for heavier crossings and sturdier buildings, it is possible that this bridge was constructed between 1915 and 1940. More information is needed to determine its construction date. In either case, the unusual appearance of the bridge makes it eligible for some accolades on the state level, at least. 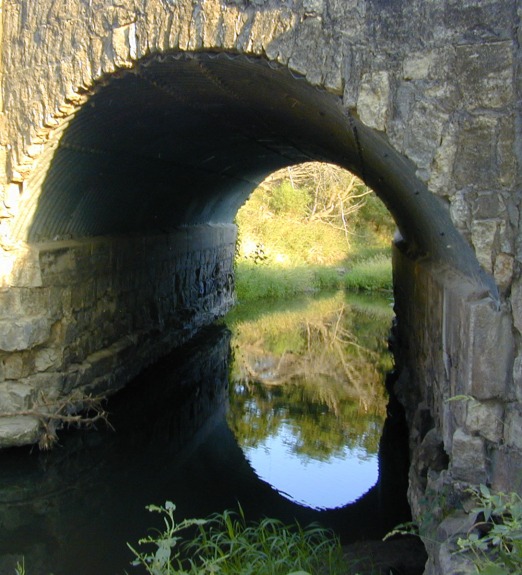 Status: Replaced with a concrete culvert

Comments: The Charlie Creek Bridge was a unique crossing for two reasons: 1. It was a stone arch bridge that was built before 1920 and 2. Despite having a total length of 30-40 feet, the bridge was built oin a 35- 40° skew, thus allowing the creek to flow freely underneath the road. This was something that the county engineer kept in mind, when this bridge was replaced with a concrete culvert crossing in 2010, as it too has a skew similar to the old one.

Comments: Before the highway was straightened out 20 years ago, the original highway presented curves and stops through even the smallest of communities. The viaduct, which crosses a once-used railroad line connecting Troy and St. Joseph, was once part of the original highway, which had a sharp double curve going over the tracks. With the realignment of the highway to eliminate this dangerous curve, the highway was relegated to a county road and the bridge became the responsibility of the county engineer. Today, the bridge, built using the textbooks standardized bridge designs in the 1920s, is still in use, carrying a gravel road. It can be seen from the new alignment just to the south.

Status: Still in use but plans include abandoning the line and crossing.

Comments:  This railroad crossing is the second span at thus location between St. Joseph and Elwood, carrying the Union Pacific Railroad Bridge. It is one of three remaining swing bridges and one of only six movable bridges left over the Missouri River, plus one of two that are still in operation. Yet plans call for the line and the bridge to abandoned, thus triggering an initiative to convert this crossing into a rail-to-trail line. If successful, the bridge will share similar stories with Poughkeepsie Viaduct in New York and the Booneville Bridge in neighboring Missouri, the latter of which appears to have their dream of a bike trail crossing come true. More on the project to follow as information is revealed.

To summarize, the Doniphan County bridges may be ordinary because the county is one of the more sparsely populated in Kansas, yet their historical and aesthetic value make them jewels found in an empty and highly weeded field. The bridges are worth hundreds of photos and many hours of research to determine how the county found ways to make use of old parts into fancy srtuctures. Especially with the ones in Blair, Bendena and Doniphan, their construction history and designs will definitely make them candidates for the National Register. And this apart from the nomination by the Chronicles for the 2014 Ammann Awards for Best Kept Secret in the field of Tour Guide.

The Author wishes to thank Robert Elder for the use of his photos for this article/tour guide and for providing some interesting facts in the bridgehunter.com website. You can click on the title of the bridges to go to the individual bridge pages for more info and to contribute to the discussion forum