Have you ever wondered how many historic bridges that were in dire state that they were candidates for demolition but were fully restored to look like it was brand new?  Every year since 2009,  Lansing Community College and Vern Mesler have held a three-day seminar featuring presentations from experts in historic bridges, preservation, steel welding and history, as well as demonstrations on how to remove pack rust, sandblast and straighten out beams with the welding machine, replacing steel components, including eyebars, and disassembling and reassembling truss bridges.  This year’s event brought in over 200 participants, including some from Europe, and featured many presenters, including Michael Mort, who provided people with a guide on how to save a historic bridge, Cynthia Brubaker of Ball State University, who talked about the Indiana bridge companies based on information brought to the history department recently, and Christopher Marston and Kevin Whitford, who talked about Moose Brook Bridge in New Hampshire and how it was restored.

Nathan Holth was also at the conference and talked about his book on Chicago’s Movable Bridges, which was released in the fall of last year. He agreed to provide the readers with some highlights of the event, including his presentation and some other facts that will encourage people to attend next year’s event. The Chronicles has a couple pictures to support the event that took place last month, during the first weekend of March. Yet they are only a tiny fraction of the bunch that one can see either through the ISPC Conference page on facebook, or through Nathan Holth himself.

My presentation on creative bridge engineering, past and present of Chicago, immediately followed an introduction by the president of the College. The president actually stayed and watched my presentation; he doesn’t always stay after he introduces the conference. My presentation was well received based on comments I got. We had a presentation about the Indiana Bridge Company from Ball State University. The good news out of this is that Ball State has a ton of archived materials from the company and is slowly digitizing them all and making it available online. Soon to be released are “bridge cards” that list all the bridges the company ever built, which should help identify bridges we don’t know who built. There also were several presentations of a more technical nature that were of interest to the many engineers in attendance. Some of the content in these presentations focused on updates in ongoing research to find ways to make riveting, welding and other historic bridge restoration techniques standardized and acceptable by groups like AASHTO and highway agencies. These updates indicate that research progress has been made, but at the same time more research needs to be completed as some challenges and problems remain. The day two demonstrations also went very well. The Lansing Community College staff that demonstrates and works with the attendees do a fantastic job and everyone seems to have a good time. Unique this year was a cast iron brazing demonstration using some broken manhole covers donated by East Jordan Iron Works.

Author’s Note: A pair of books dealing with restoration and Chicago’s Bridges are in the possession of the author and will be profiled in the Book of the Month series, together with the interview with Nathan Holth and Michael Mort.

Beginning in April, the Bridgehunter’s Chronicles will start a series on unusual bridge designs- namely bridge designs that were not commonly used for roadways and railroads but were built for experimental purposes.

This bridge is one of them. Before talking about the truss type, take a look at the picture above. This was discovered by fellow pontist Luke Harden and was brought to the author’s attention shortly before Easter. The bridge spanned the Wapsipinicon River in Independence, in northeastern Iowa. It consisted of two truss spans, yet when looking closely at the bridge, it features a rather unusual truss design. It is not necessarily a Warren truss for the diagonal beams form a W-shape. Yet it is not a Whipple, nor a Bollmann, for the diagonal beams slice through three panels before meeting the A-frame panel, which is also sub-divided. 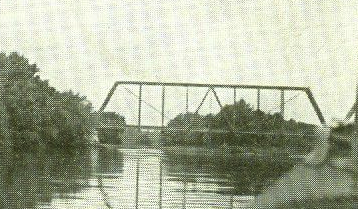 This leads to the Chronicles’ Guessing Quiz, featuring two questions:

2. When was it built, in your opinion?  As the bridge no longer exists, the other question is when was it removed.

You can leave your answers in the Comment section either here or in the facebook pages bearing the Bridgehunter’s Chronicles’ name.  The answer will be given at this time next week, with some interesting facts about this truss bridge type.  Good luck with the guessing!