Author’s Note: This is the second article of a three-part series on the bridges of western Wisconsin, based on the journey taken by fellow pontist and guest columnist, John Marvig, which included the counties of Chippewa, Dunn and Eau Claire. To view part I on the bridges of Eau Claire, please click here.

Dunn County has a population of 43, 967 inhabitants and is located northeast of Eau Claire, about 45 kilometers east of the St. Croix River, the river that divides Minnesota and Wisconsin. The county seat, Menonomie, has 16,264 inhabitants and is home to the University of Wisconsin STOUT and has the Mabel Tainter Center of the Arts and the Wilson Place Museum, one of many places to see during one’s stop in the city. One of the largest lakes in the county is Tainter Lake, an artificial lake that was created through the creation of the Cedar Falls Dam by Andrew Tainter, a rich lumber businessman who utilized the area for logging until 1901 through the creation of the mill and dam in the 1880s. While the mill was closed in 1901, two years after Tainter’s death, the dam was later converted into a hydroelectric dam, which still produces electricity to residents of the Cedar River vicinity today. Tainter Lake serves as the confluence point where the Hay and Red Cedar Rivers meet before making its journey to the Chippewa River at Dunnville. Most of the bridges profiled here come from the Red Cedar River.

Overall, Dunn County, like the rest of the state of Wisconsin, has not been too kind to historic bridges.  All but one of the pre-1945 roadway truss bridges have been replaced with modernized structures. Another truss bridge, the Tainter Lake Bridge, was scheduled to be replaced in 2011, even though the Pennsylvania truss span is in excellent condition. However judging the existence of the bridge through Bing and Google View, chances are that the people residing near the Lake are fighting to keep the bridge open to traffic.  As far as railroad bridges are concerned, they are numerous, as you will see in the samples provided by John Marvig. While a couple of them are still serving rail traffic thanks to the Soo Line/ Canadian Pacific Railways, many have been converted to a bike trail, while others have been abandoned but are awaiting to be reused for recreational purposes. Without further ado, here are some bridges that are worth visiting according to the guest columnist:

Wilson Creek Bridge
Built By: Chicago Northwestern Railway Company
Currently Owned By:  City of Menomonie
Total Length: 196 Feet
Length of Largest Span: 150 Feet
Width: 1 Track
Height: 8 Feet (2.4 Meters) Estimated
Main Type:  Quadrangular Through Truss
Approach Type: Deck Plate Girder
Date Built: Unknown
Traffic Count: 0 Trains/day (Bridge is abandoned)
The Wilson Creek Bridge is a very small bridge, located in a scenic area of downtown.  It goes very unnoticed.  It was abandoned in 2003 after the dairy plant stopped using rail traffic.  The line, when  it was built was designed to go to downtown off of the Union Pacific mainline through the extreme northern portion of town.  It was also used to connect to the Milwaukee Road line which went south to the Wabasha, Minnesota area.  But the Milwaukee Road line was abandoned in 1975, and after the dairy plant stopped using rail traffic, there was no point to have this line.  So it was taken up.  Portions were turned into a trail.
What really bothers me is how there is trail on this line just north of this bridge, and about 500 feet south of it too.  And building a trail over this bridge would provide a good connection between the north part of town, the Red Cedar State Trail (built on the Milwaukee Road) and UofW Stout.  But for some reason, this has not happened yet.  The bridge has several rotten ties, and one wrong step will make sure you end up in the marshy area below. 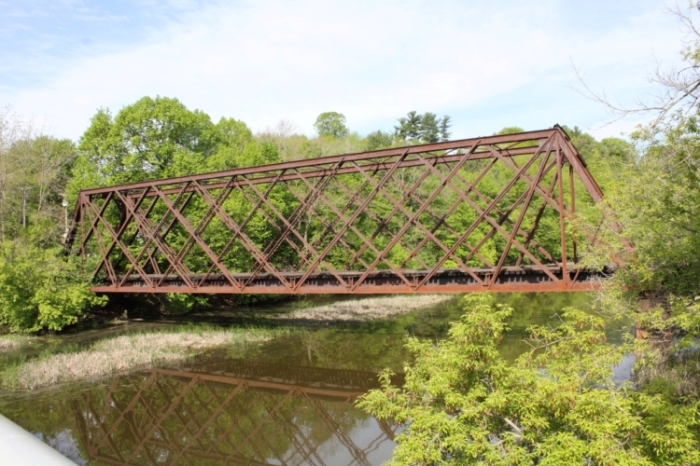 This photo is looking from the bridge on Meadow Road.  Note how the bridge is in an urban area, but blends in nicely. 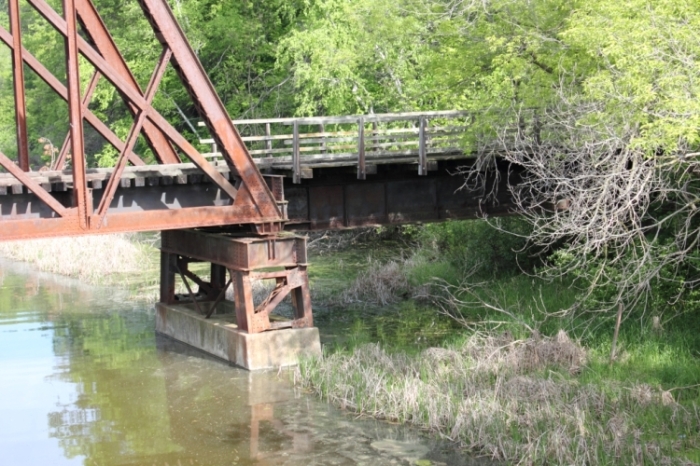 This photo is looking at the approach span.  Note the pier, and the design that would have been used post-1900.

This photo is looking south through the bridge.  Although some of the features seem to demonstrate this bridge is post-1900, the portal seems to show it is pre-1900.
Just south of this bridge lies the Red Cedar River Bridge, on the same line.  This bridge was likely built the same time.  This bridge also directly crossed over the Milwaukee Road.  The south end lies on the campus of UofW Stout.  This bridge is fenced off, and can be accessed from a dam access road, or a UofW parking lot. 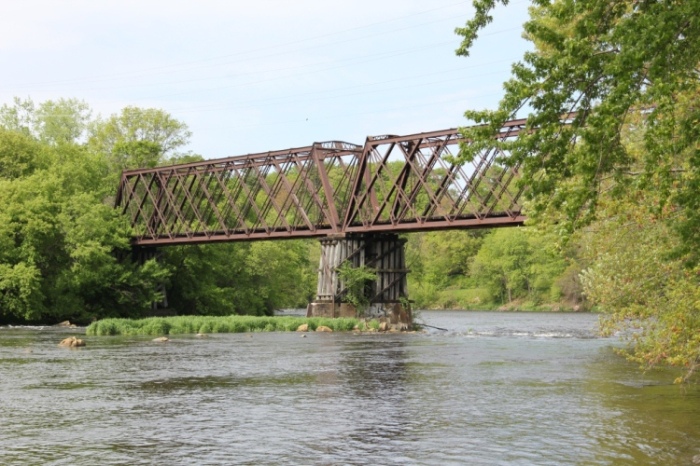 This photo is looking from the upstream riverbank.  Some prominent differences between this bridge and the Wilson Creek Bridge is the use of trestle approaches, the huge wood piers and the use of 2 quadrangular spans.

This photo is looking at the approaches over the Milwaukee Road line.  Note the beam span.

This photo is looking on the south side.  Note the large fence, and the half of a date plate.  The plate does not have any date on it.

Located about 12 miles south of Menomonie Wisconsin is the massive bridge.  This thing is located in a very scenic area called the Dunnville Bottoms, which is a very sandy and flat area along the Chippewa and Red Cedar Rivers.

This is a really cool bridge over the Chippewa River south of Menomonie.  First, it has four different designs, making it fairly rare. Second, just look at it.  Everything is massive!  The bents on the trestle to the large truss main span. I believe this bridge was built about 1905.  It about the time these types of truss spans became more common.
This bridge was also built by Morse Bridge Company.  There are inscriptions on top of the large main span.  But it could have been built earlier in the 1880’s.
I saw a rattlesnake when I was at this bridge.  But be very careful if you go here.  There are many vantage points, but you do not want to get hurt here. 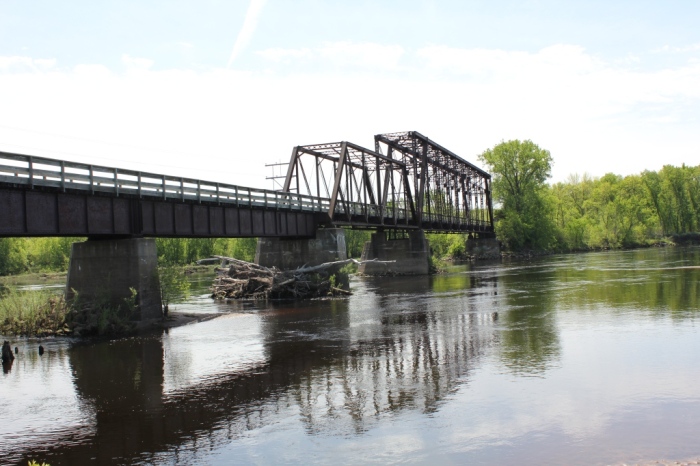 The most commonly used vantage point is off a trail near the deck plate girder spans. 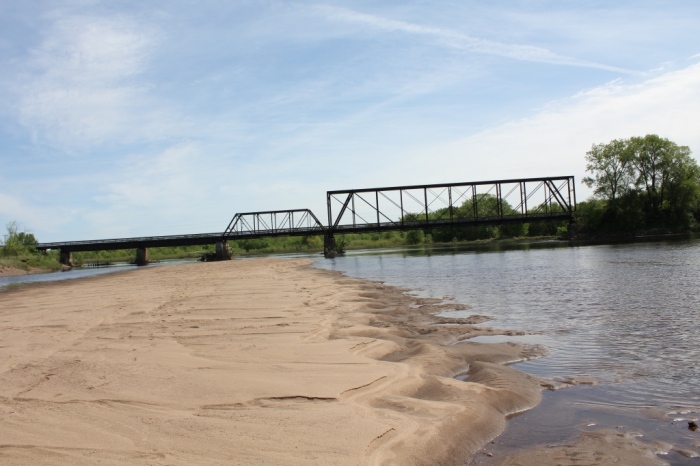 Another good one is from a massive sandbar in the river. 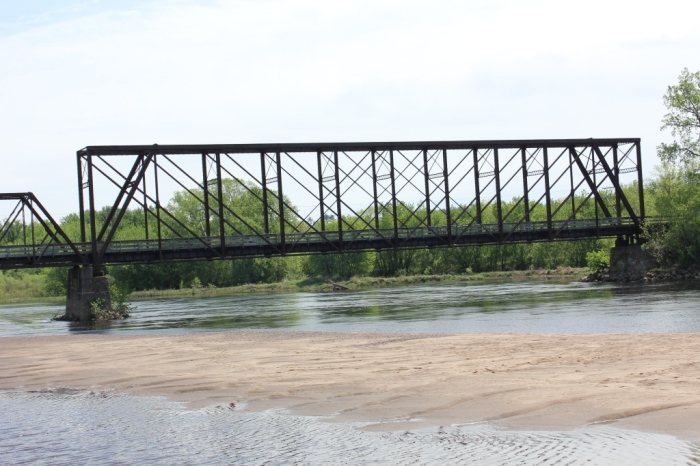 The main span is nothing short of huge, and contains quite the geometry.

The smaller main span is a lot more common, but is tiny compared to the larger span.

This is the deck plate girder spans. 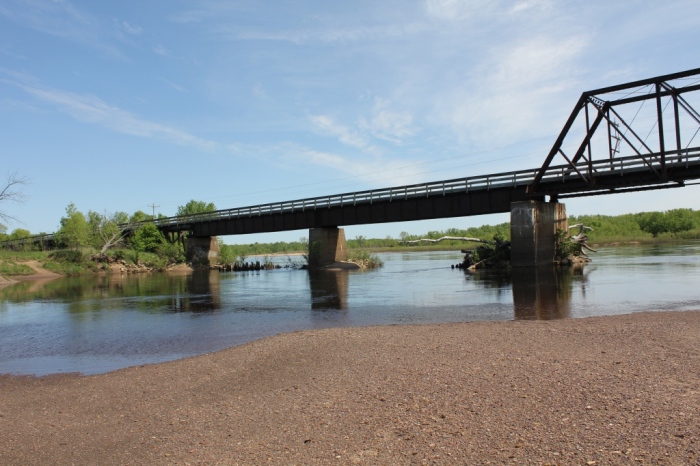 This is also the deck plate girder spans, at a different angle. 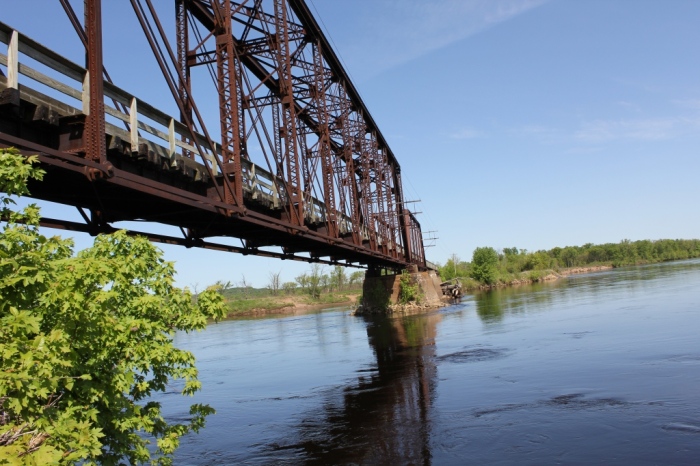 This is looking north along the bridge.  There are more trestle spans behind me.

This is looking north across the bridge.

This is the inscription on the main span. 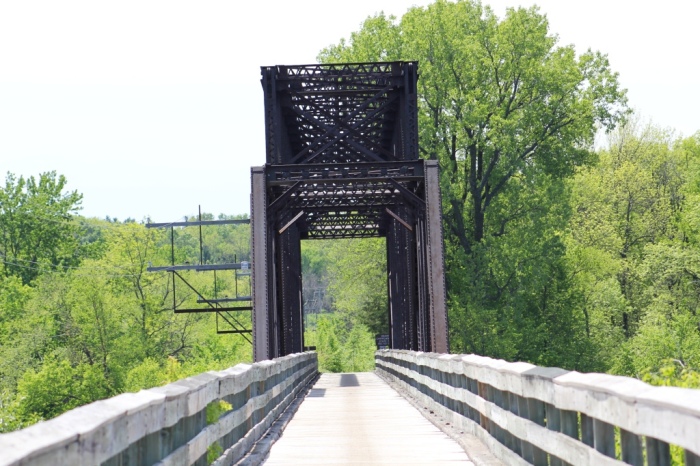 This is looking with a telephoto south down the length of the bridge.

Author’s Note: The final bridge on the Dunn County Tour is one of the mystery bridges I had posted in May 2012 (click here). Located over the Red Cedar River, the Downsville Bridge was built by the Milwaukee Railroad and was converted into a bike trail when the line was abandoned in the 1970s. There was a speculation that this bridge and another bridge similar to that but located in Fayette County, Iowa were part of a bigger multiple span railroad bridge. Yet according to information from the Milwaukee Railroad Museum, it was all coincidential, as the Downsville Bridge was built at its original location and was never moved at any time. While this solves the mystery with regards to the Downsvulle Bridge, the question still remains open as to whether the Fayette County span was constructed at its original location or if it was relocated from somewhere else, and if so, where. To be continued…….

The last part of the tour consists of the bridges of Chippewa County. Apart from photos and commentary by Mr. Marvig, at least three other pontists and photographers and the author have some bridges to add to make the trip worth it. Stay tuned….

The author would like to thank John Marvig for the use of his photos and for his tour of the bridges in and around Menonomie and the rest of Dunn County.